'We want to keep the focus on ending racial injustice': Protesters gather in downtown Portland amid discussions to pull feds from city

The political standoff between the Trump administration and Oregon officials demanding federal officers leave the city may be winding down. 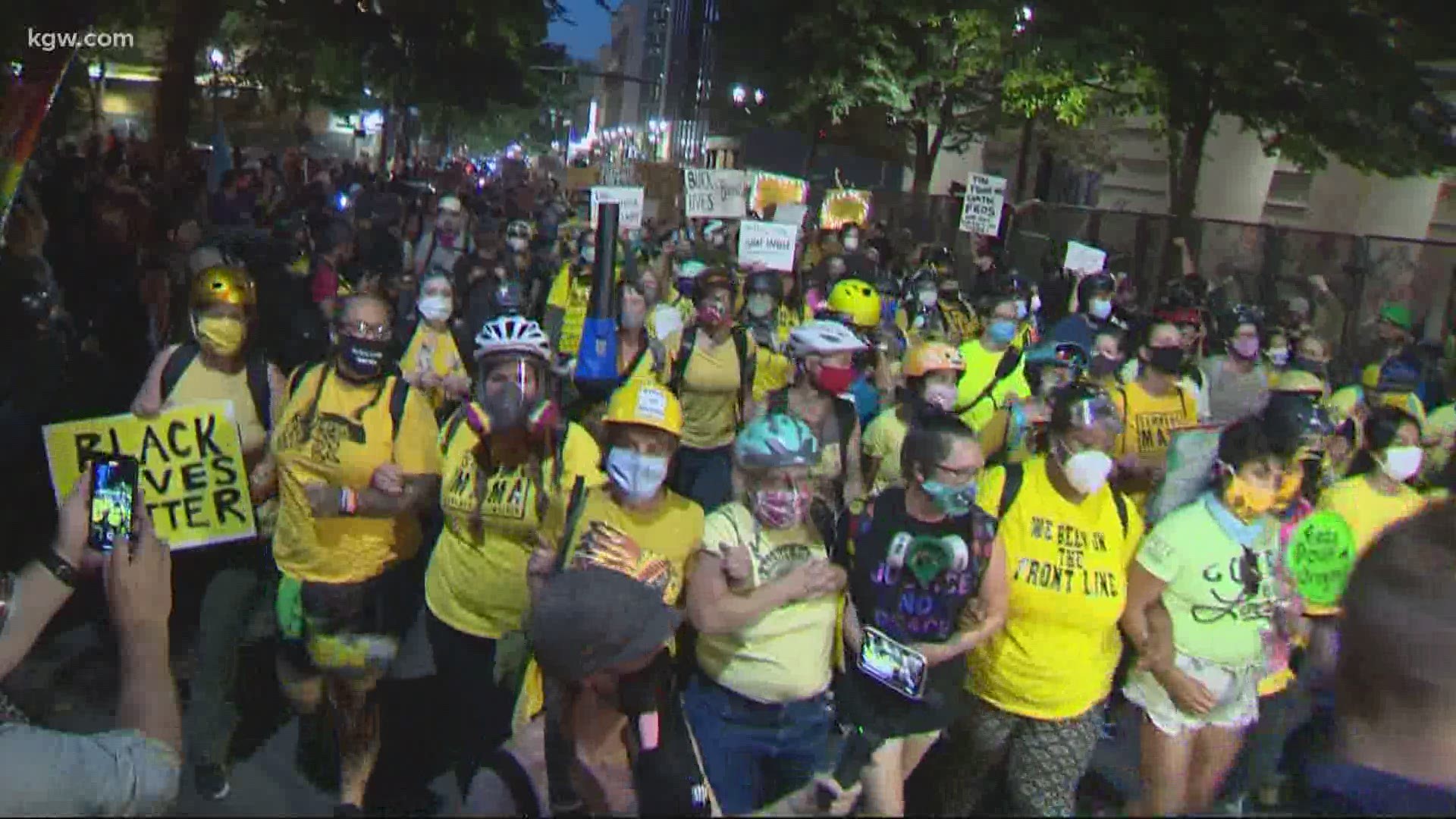 PORTLAND, Ore — Protests continued Tuesday night in downtown Portland, for the 62nd consecutive night, with hundreds of demonstrators converging on the area of the Multnomah County Justice Center and federal courthouse.

Around 9:30 p.m., the Wall of Moms, a group of moms that received national attention for positioning themselves between demonstrators and police during recent protests, marched to the Justice Center. They were met with applause and joined demonstrators already gathered in downtown Portland.

Bev Barnum, one of the original organizers of the Wall of Moms, told us her No. 1 concern is federal agents leaving Portland. She went on to say: "... Allowing room and space for our very own mayor and governor to come to the table with Black leadership. There is quite literally human rights violations on a major platform right here. We are getting our a** kicked, tear gas, rubber bullets, bean bag rounds, batons. We are getting it from every side."

Viviana Gordon added that keeping the focus on ending police brutality was her priority.

"Even though there is a federal occupation, and I think that is a violation of the Constitution, we really want to keep the focus on ending racial injustice," Gordon said.

Clashes between protesters and federal officers, who were on the ground and on the roof of the courthouse, lasted until 3 a.m. Portland police in a 3:30 a.m. news release said they were not present during any of the activity, did not engage with any crowds and did not deploy any CS gas. No arrests were made by Portland police, the department said.

Warning: the language in the video is explicit.

Downtown at #PortlandProtests now... this is what it looks like when the Wall of Moms arrives pic.twitter.com/LJBP8AEV8Y

Close to 9:40 p.m., the crowd of protesters congregated along 3rd Avenue, one block south of the federal courthouse, to listen to speeches.

Just before 11 p.m., a fire was burning in the median in front of the federal courthouse. However, minutes later, others from the crowd put the fire out.

Fire burning in the median in front of the federal courthouse.

Minutes later, someone else in the crowd just came in & yelled for ppl to put it out. Stomped on it & poured water. #PortlandProtests pic.twitter.com/g5tzz3LiJl

At midnight, federal officers on a loudspeaker warned protesters about destroying federal property while chants increased from the crowd. Fireworks and small fires could also be seen and heard.

12:52am and the wall of moms are preparing for federal agents to respond with tear gas pic.twitter.com/7wFe3WB4uy

By about 1:40 a.m., the Federal Protective Service declared an unlawful assembly and told protesters to move west and north. Tear gas and rubber bullets were then released onto the crowd causing many people to disperse but some created a shield line to defend themselves and stayed put.

At about 2:15 a.m., federal officers on foot forced protesters out of the area using more tear gas after people began pushing on the fence surrounding the courthouse. More officers in riot gear joined, lining the streets and eventually ending up in a standoff with protesters at 4th Avenue and Salmon Street.

An enormous amount of tear gas has just been deployed from the federal courthouse steps #PortlandProtest #PDXprotest #BlackLivesMatter pic.twitter.com/oUFis5vlUA

By about 2:30 a.m., the remaining people wandered around the blocks adjacent to Lownsdale Square Park and slowly left the area, Portland police said.

Many protesters throughout the night wore gas masks and helmets, and carried signs, hockey sticks, lacrosse sticks, umbrellas, leaf blowers and fireworks, Portland police said. The hockey and lacrosse sticks were used to fling gas canisters away from protesters, and umbrellas were used for protection.

The political standoff between the Trump administration and Oregon officials demanding federal officers leave the city, however, may be winding down.

On Tuesday afternoon, hours after Attorney General William Barr defended the deployment of federal officers to Portland and other cities across the U.S., the Associated Press reported officials within the Trump administration were in talks with Oregon's governor about a possible withdrawal.

A senior administration official stressed to the AP that any decision to pull officers back would depend on the state stepping up its own enforcement at protests.

The news came as Seattle’s mayor on Tuesday confirmed federal officers had indeed left that city.

The New York Times reported the move happened, in part, because protests had "stayed away from federal buildings."

For weeks, protests in Portland, which began following the death of George Floyd, had played out in different locations throughout the city’s downtown core.

In the evenings, peaceful crowds of thousands marched across bridges and gathered at Pioneer Courthouse Square and other locations. Later at night, smaller crowds would break off and often clash with Portland police officers closer to the Multnomah County Justice Center and City Hall.

Some in those crowds also took aim at the federal courthouse, prompting the Trump administration to deploy officers with Customs and Border Protection and the U.S. Marshals Service.

In the weeks since, clashes have centered around the federal courthouse, where officers, dressed in combat gear and camouflage, stand guard behind a fence and fire crowd control munitions.

Multiple protesters have been hospitalized.

Earlier this month in a Department of Homeland Security intelligence briefing, officials wrote recent protests in Portland "…reflects the enduring threat environment in the region since at least 2015."

According to the New York Times, a memo, dated July 16, also stated: "We have low confidence in our assessment that sustained violence against government personnel and facilities in Portland, Ore., since May reflects the enduring threat environment in the region because we lack insight into the motives for the most recent attacks."