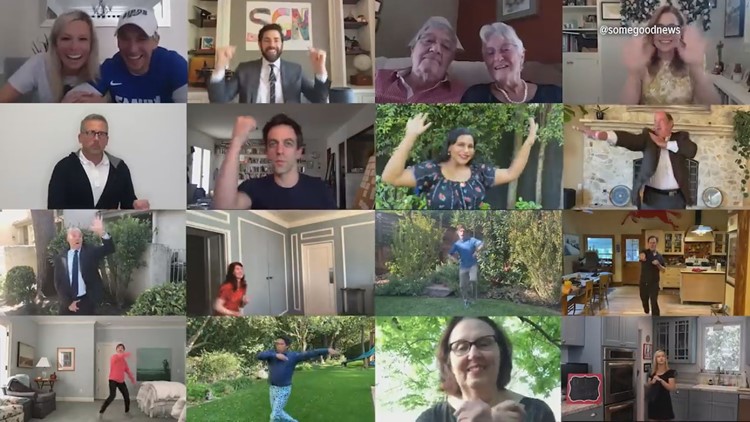 Photo by: Some Good News
Actor John Krasinski surprised a Charles County couple with a virtual wedding hosted by "The Office" cast on his YouTube Series "Some Good News."

NEW YORK — How about some great news this Friday about "SOME GOOD NEWS."

When the COVID-19 pandemic began sweeping the nation forcing businesses to close and stay-at-home orders to be issued, it seemed the news was getting more dreary every single day.

Krasinski began hosting a YouTube show from his home called "Some Good News" that featured all-things positive. One episode reunited his castmates from the hit show "The Office," which ended with a surprise wedding for one Maryland couple. He even hosted a virtual prom and honored Class of 2020 graduates.

Well, even though the feel-good, eight-episode web series has come to an end, it won't be going away anytime soon.

ViacomCBS has announced they have picked up the series and are proud to welcome Krasinski to the TV family.

"[I] Could not be more excited and proud to be partnering with CBS/Viacom to be able to bring 'Some Good News' to so many more people, Krasinski said in a statement. "From the first episode, our goal was to create a news show dedicated entirely to good news. Never did I expect to be joining the ranks of such a historic news organization as CBS."

According to Variety, "Krasinski will not be the regular weekly host of the series but is expected to have a recurring on-air presence."

The Los Angeles Times reports the episodes will air on CBS All Access, as well as ViacomCBS' linear channels, including Comedy Central. Krasinski will also serve as the show's executive producer.

While details are limited at this time, more information is expected to be released in the coming months.

The Some Good News YouTube channel currently has 2.57 million subscribers.