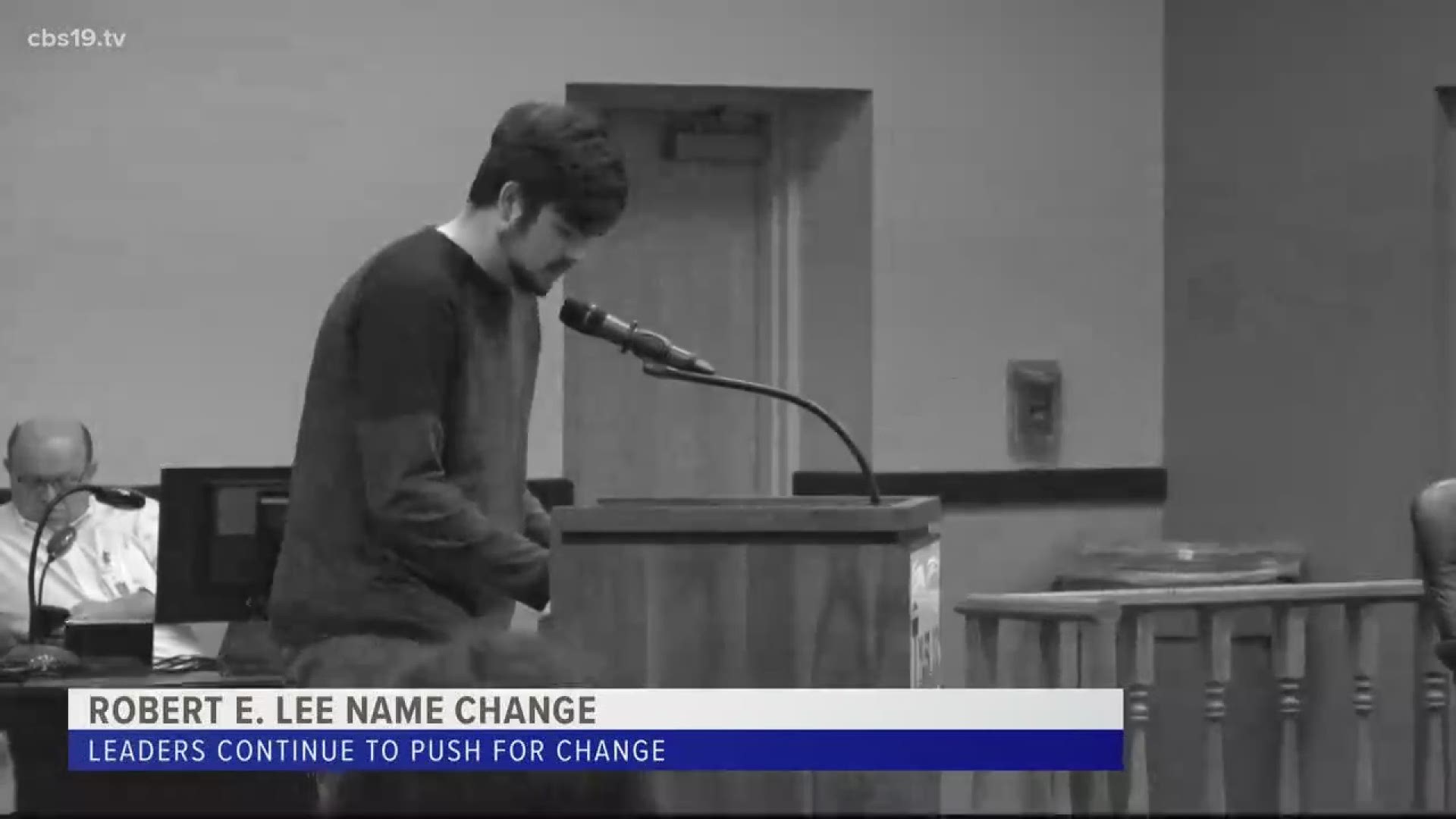 Tyler, TX — The name of Tyler Independent School Districts' High School, Robert E. Lee has been in the news a lot lately.

It's named after a Confederate war general, and the controversy around it, won't be going away anytime soon.

Today, dozens of people spoke out about changing the name after it was pulled from the June seventh school board meeting agenda, last week.

Since then community leaders planned a meeting at the Church of Christ at SouthCentral for Monday at 6 p.m. just before the school board meeting at 7 p.m.

He brought up the fight for change that happened in the 70s, "As a result that flag, that mascot was changed."

Another person that spoke at the church included Denise Hawk, a second grade teacher at Tyler ISD. Hawk brought up the 28% academic gap between African American students and white students, attributing it to a concern of the school board president. She speculates the gap could be attributed to this...

"How are we going to fill that academic gap if our students can't even feel respected by their community?"

Wondering what it will be like for her second graders growing up and attending Robert E. Lee.

"Can you imagine being a black person going to a high school under the name of a slave owner and feeling secure, and loved, and respected? I can't even imagine that."

Others that spoke included former city councilmen Donald Sanders. He shared his story of his experience being a part of the first integrated senior class to graduate from Robert E. Lee back in 1971.

City Councilmen, Ed Moore, spoke about graduating from Emmett Scott High school, and said while the school was no longer around, it was still part of his identity.

Other people stood up and spoke during the church meeting before they went over to the school board meeting to be silent protestors.

At the meeting, students showed up in force as a form of their own protest.

"The community, the alumni, the board, they have all spoken and the students are what's left, and so I'm hoping that will make the difference." Robert E. Lee student, Mary Claire Neal said.

Others called for people in the audience to stand with them in support.

"If you are in the audience in support of changing the name of Robert E. Lee please stand with me," Honor Neal said.

Neal is one of the dozens of students speaking out in favor of changing the name of the school. She wishes the school board would at least let the community vote on the topic.

"In order to make progress as a community we at least have to be able to vote on a name change." she said.

Fellow supporter, Carolyne Crawford said she hopes their show of force will make a difference.

Students involved in Fine Arts programs and Athletics explained what it was like to win an award at their high school.

"Each year Robert E. Lee is the name that follows my own and my peers. For much of the student body and I, Lee's name is a symbol for the slavery endorsed by the Civil War." Rachel Neal said.

Other students speaking out on the issue included the School Board Presidents' son, Fritz Hager III.

"I believe changing the name of a high school is a small section of a larger goal of social equity in our country," Hager III said.

Brandon Collins believes the school board is brushing off this issue saying, "They kind of pushed it off. I feel that some students have a voice, and this isn't a name we want to represent our school, and it's actually kind of hateful to a lot of people as an African American student at Lee."

Taniyah Jones said, "This is a community that I live in and I want to feel comfortable in the community just like everybody else does."

Matthew Spellman was one of the students that brought up the previous attempts of change at Robert E. Lee.

"This is not a new thing. We are a continuation of the people who want change in our community and want to leave behind the vestiges of Jim Crow That are still present in our lives today." Spellman said.

Jack Gibson called the name "Disgusting" and wants everyone to think about others.

"We need to look more at how other people feel rather than just ourselves." Gibson said.

One thing no one really brought up was changing the name of John Tyler High School. Speaking with former city councilmen, Darrell Bowdre earlier Monday evening he said that's because John Tyler was not used as a symbol of fear and slavery like Robert E. Lee. He also mentioned Robert E. Lee was used in an attempt to keep African Americans from wanting to attend schools with that name.