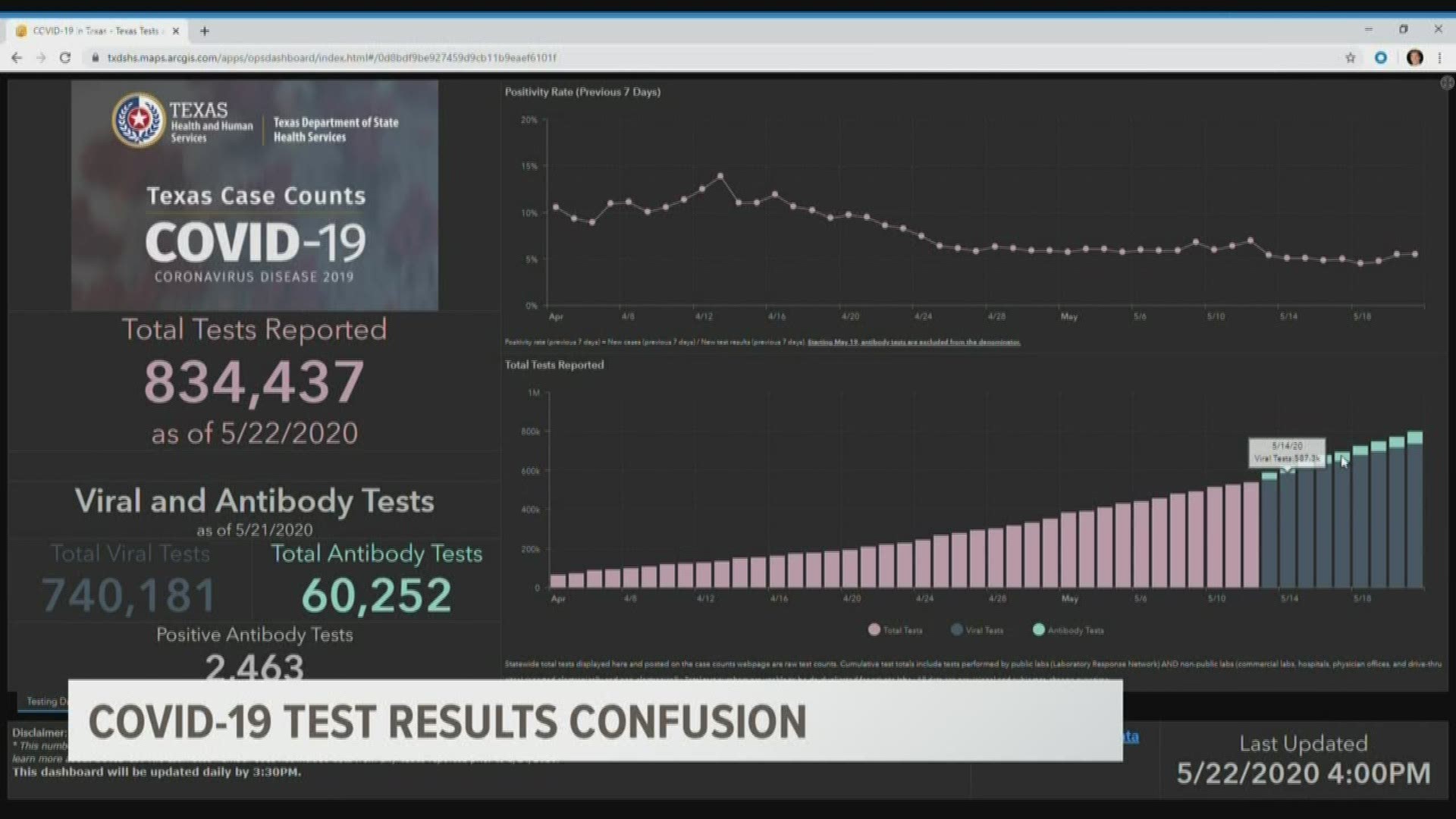 TYLER, Texas — Two of the most important criteria in the reopening of Texas are the number of people being tested for COVID-19 and the percentage of those who test positive. Gov. Greg Abbott has cited them frequently when explaining his decisions about how and when to restart the economy.

But now, the data reported by the State of Texas has been called into doubt.

The Texas Department of State Health Services acknowledged Thursday that it had been combining results from viral testing and antibody testing.

“It’s a big issue, yes,” said Dr. Dhitinut Ratnapradipa, a professor in the Department of Population Health at Sam Houston State University. “It would be best if these two types of reporting would be divided. Why? Because they are testing different things.”

Gov. Abbott was asked on Monday whether DSHS was combining those numbers, and he said that was not the case, that they would be reported separately. That did not happen until three days later, however, and DSHS added antibody test data from five days before the governor's statement.

Ratnapradipa explained that the two types of tests are similar yet very different in their goals. Viral tests are the nasal or cheek swabs that let a person know if they are currently sick.

“They’re people who may be contagious and should self-quarantine, and these tests should be triggers for contact tracing,” he said. “It’s also useful estimating the potential health care utilization for those who may be at risk for hospitalization.”

Antibody testing, on the other hand, is a blood test that shows if someone has already been sick and developed antibodies that provide immunity. If someone tests positive for antibodies, they will remain healthy and will not need a hospital bed or a ventilator.

“It might be used as a measure of how widespread the COVID-19 was spread out throughout the community," Ratnapradipa mentioned. "So, similar to the report of the number of the recovered cases.”

Texas is one of at least four states that had combined the two sets of numbers, according to The Atlantic. In a statement, Lyndsey Rosales, a spokesperson for DSHS said," Antibody tests are included in our testing data. You can find a breakout of viral and antibody tests on our dashboard. Throughout the COVID-19 response, we’ve been requiring labs to report all tests to us, and that’s how we’ve been reporting them out. We’ve had a small percentage of antibody tests reported, but with that kind of testing becoming more available, we are separating the two and providing them separately to the public to better track the containment of the disease."

State Rep. James White (R-Hillister) expressed his concerns in a series of tweets Friday morning, saying that many decisions to be made are dependent on having all COVID-19 data available, including whether sports can proceed, how voting should take place, and business liability.

According to DSHS, approximately four percent of all antibody tests have come back positive, which is lower than the percentage of viral tests that come back positive. Combining the two datasets without acknowledging it would give the appearance that the state is testing more people while fewer have COVID-19, which may lead elected officials to conclude the state is more prepared to reopen than it actually is.

“The value of those two tests absolutely is there,” Ratnapradipa stated. “But you need to make sure that, you know, don’t mix that together.”