75 years after his death in WWII, a veteran's dog tag makes its way home

Army Pvt. Abraham Kalmikoff died in 1944. His daughter never had a chance to meet him. 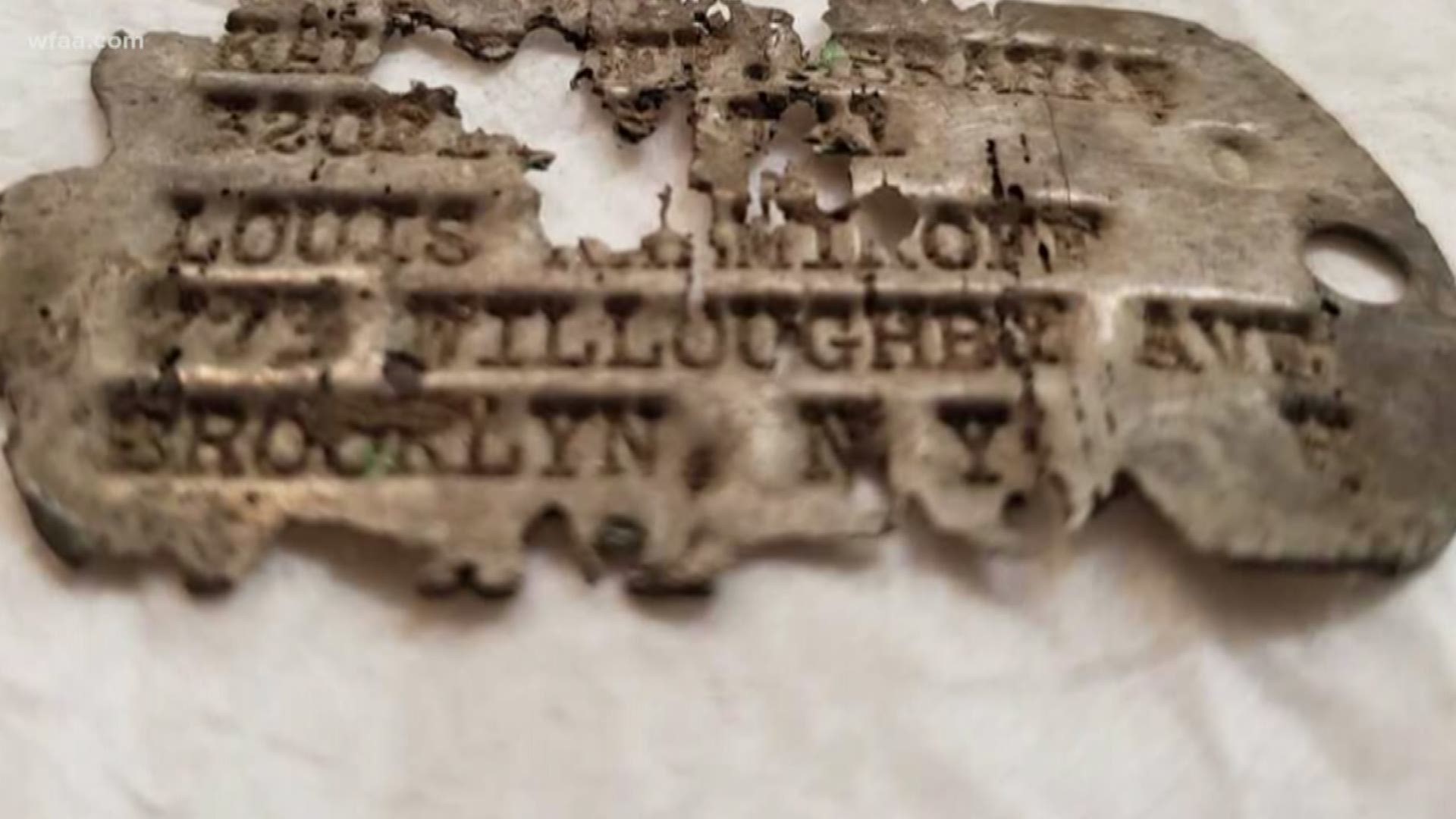 COLLIN COUNTY, Texas — Everything that Bobbi Wells knows about her father she learned secondhand.

“I knew that he was gregarious, a happy person,” she told WFAA. “He was a generous man, and he loved my mother very much.”

She said she was just an infant when her father, Army Pvt. Abraham “Abie” Kalmikoff, was killed in World War II. He was part of a division that landed on Omaha Beach the day after D-Day, June 7, 1944.

He died about a month later after bravely clearing routes for American tanks. He received a Silver Star for his efforts.

“I’m very proud of my dad, of course,” Wells said.

Abie Kalmikoff never did get to meet his daughter. But nearly 75 years later, she finally feels like she has a piece of him—and it’s all thanks to two strangers hundreds and thousands of miles away.

“I just couldn’t believe it,” she said. “I think it's all pretty miraculous.”

One of those “strangers” is Scott Bradley. He’s a military buff from England with a huge role in this story. He says the tale started years ago with his father.

“My father went down to the recycling center in Southampton, and there was a chap throwing basically a tin of ... what you’d call tack and such,” he said via Skype this week.

In that tin was an American dog tag, in bad condition, with the name partially obscured. His father saved it and gave it to Bradley, who hung on to it for years, unable to figure out who it belonged to.

“I struggled myself to ID it, so that’s when I reached out to Katey,” he said.

That’s where Katey Mishler comes in. Mishler runs a World War II website from Tennessee and has reunited hundreds of dog tags with military families over the years. Bradley has worked with Mishler in the past.

“He messaged me on Facebook and said, ‘Hey, I've got this little tag. I don't know if you can do anything with it,'" she said.

Mishler said it took her a while, but she finally realized the dog tag said “Kalmikoff.” It was Abie’s.

“It was just a heavy moment and a very exciting moment to know the family was hopefully going to get a little bit of closure and receive something really precious to them,” Mishler said.

That moment happened Sunday. Overcome with emotion, Wells opened the envelope from England and held her father’s dog tag for the first time, 75 years after his death.

“It was just a wonderful, wonderful moment,” said her husband, Jerry. “To have something that he actually wore, that was close to his heart.”

No one quite knows how the dog tag ended up in England when Abie died in France. What they do know is that it’s now home.

“I think it adds a dimension to my life that wasn’t there but was important to have,” Wells said.

A daughter’s love and her father’s sacrifice, forever linked.

RELATED: D-Day veterans in their 90s parachute into Normandy for 75th anniversary