ERCOT says the collapse would have led to a statewide blackout for weeks. 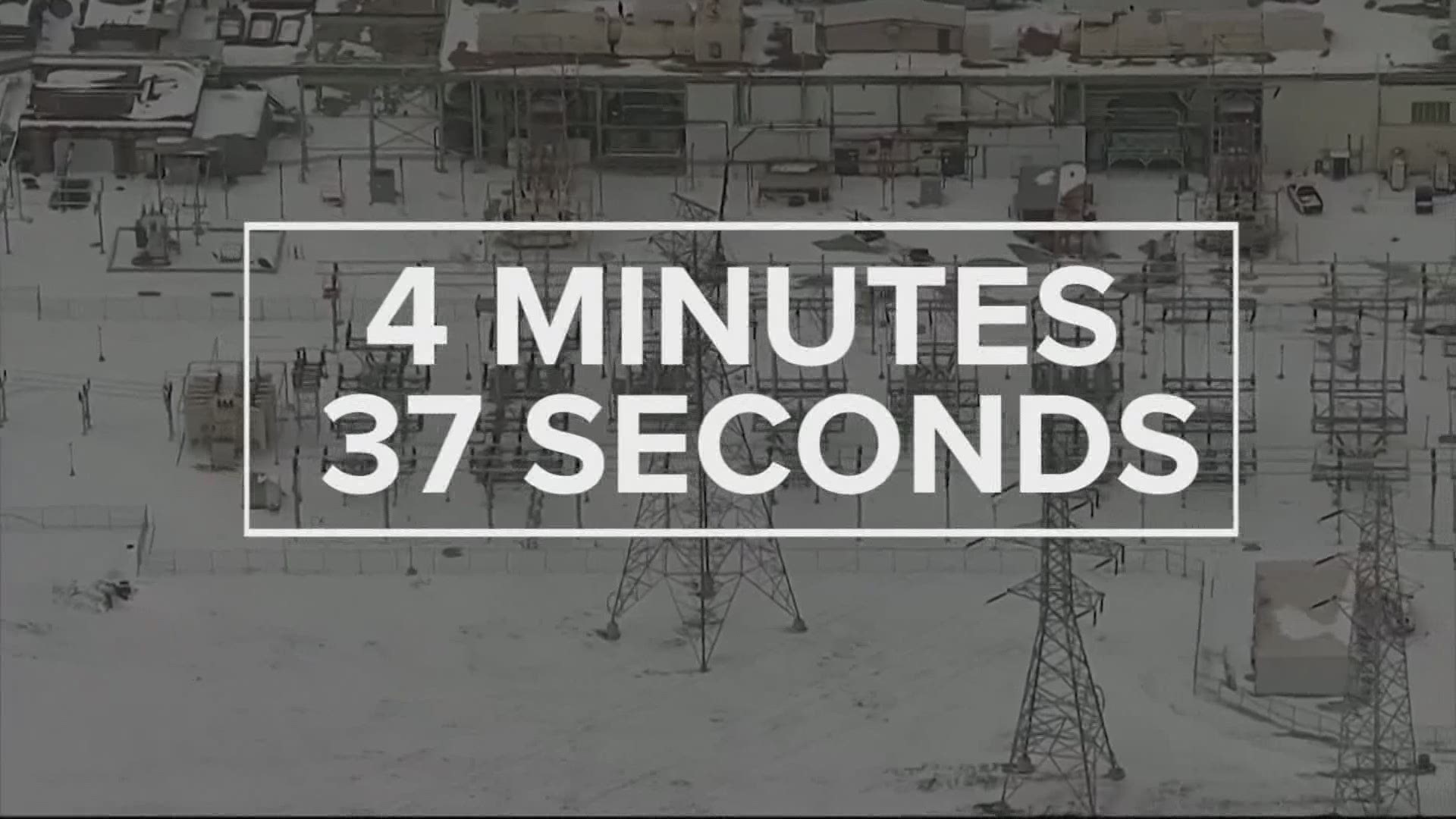 HOUSTON — Last week, the Texas power grid was “4 minutes 37 seconds away from a total collapse,” meaning a statewide blackout, ERCOT officials said at an emergency board meeting Wednesday.

Had it happened, Electric Reliability Council of Texas says Texas would have been in the dark for weeks if not longer.

CEO Bill Magness discussed the events that led to extended power outages across the state during the meeting.

“This was a devastating event," Magness said in his opening statements. "Power is essential to civilization."

ERCOT officials said controlled outages were implemented to prevent a statewide blackout, saying the storm was unlike anything Texas has experienced before.

Three-hundred and fifty-six generators were knocked offline during the storm nearly doubling what Texas experienced during its last major winter storm in 2011. It led to millions of Texans being in the dark for a record 70.5 hours.

Last week was bad, but learning today how much worse it could have been.

Per @ERCOT_ISO, it was 4 minutes 37 seconds away from a total collapse of TX power grid aka a statewide blackout.

Had it happened, ERCOT says it's likely TX would have been in the dark for weeks #khou11

ERCOT said it has 13 units that it has contracted with in case of a black-out event, but six of those experienced outages last week, officials said Wednesday.

During the meeting, ERCOT did share some of the steps it took to prepare for the winter storms. These included cancellation of transmission maintenance outages and waving COVID-19 restrictions to bring in additional support staff.

An order from the Department of Energy allowed power generators to ignore certain environmental standards, which was extremely helpful, officials said.

For perspective in 2011: @ERCOT_ISO ordered power outages for 7.5 hours.

6 ERCOT board members who live out of state resign

The news comes as the Electric Reliability Council of Texas announced in a Tuesday notice to the Public Utility Commission of Texas that four of its board members will resign effective Wednesday, following its emergency board meeting.

A fifth board member separately submitted his resignation.

And a sixth board member's resignation was announced at Wednesday's meeting.

Following the announcement out of state board members were resigning, Gov. Greg Abbott sent out a statement Tuesday saying he welcomed the resignations.

"The State of Texas will continue to investigate ERCOT and uncover the full picture of what went wrong, and we will ensure that the disastrous events of last week are never repeated," Abbott's statement read in part.

According to the filing, here's who will resign following Wednesday's ERCOT board meeting:

All five members who are resigning live out of state, records show.

The resignation letter from Talberg, Crampton, Bulger and Hepper acknowledged these concerns, the filings show.

"We have noted recent concerns about out-of-state board leadership at ERCOT. To allow state leaders a free hand with future direction and to eliminate distractions, we are resigning from the board effective after our urgent board teleconference meeting adjourns on Wednesday, February 24, 2021," part of the resignation letter read.

Anesetti-Parra is the market segment director for the Independent Retail Electric Provider Market Segment and also sits on the board. She submitted her resignation to the Utility Commission separately.

In addition, Craig S. Ivey, who had applied to fill a board vacancy, has withdrawn as a board candidate.

“We look forward to working with the Texas Legislature, and we thank the outgoing Board Members for their service," ERCOT said in a statement Tuesday.

Last week, amid growing frustrations and public outcry during the winter storms in Texas, ERCOT removed the names of its board members from its website. It has since restored those names. Prior to being pulled down, the biographies listed Talbert as a former state utility regulator in Michigan. Records indicate she lives in Williamston, Michigan.

Other ERCOT board members who records indicate live out-of-state include: