Electors across the country were casting ballots Monday and are expected to deliver the 270 votes needed to award the election to Joe Biden by end of day. 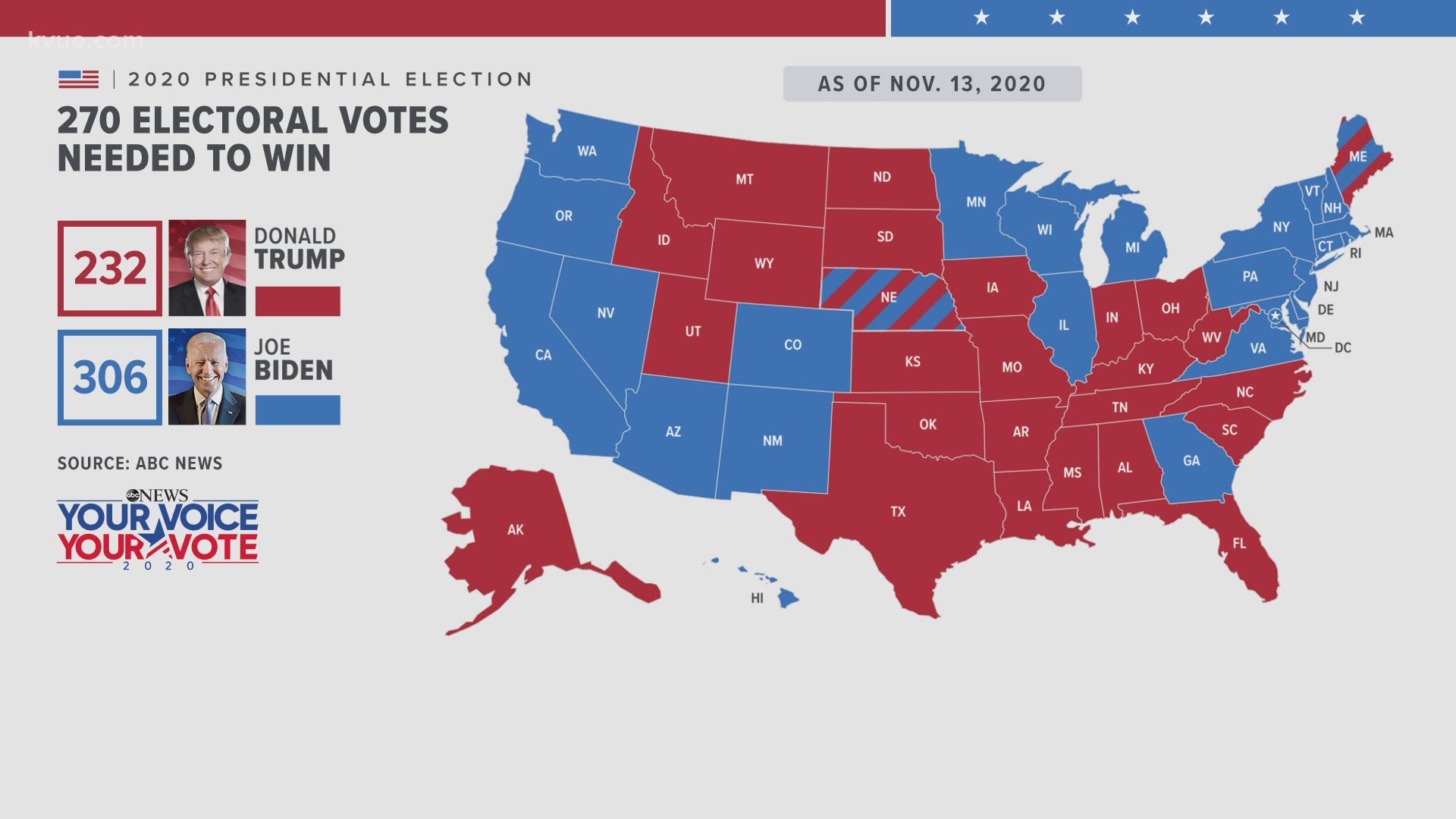 THE TEXAS TRIBUNE – Texas electors met at the state Capitol on Monday and delivered their state’s 38 Electoral College votes to President Donald Trump — and then defiantly urged the legislatures of the swing states of Pennsylvania, Georgia, Michigan and Wisconsin to overrule the will of their voters and appoint their own electors.

The vote came as electors across the country were gathering to cast their ballots and award the 270 votes needed to formally award the election to former Vice President Joe Biden. The Texas electors' resolution shouldn't have any impact on the results of the presidential race. The four states listed in the resolution have already cast their votes for Biden Monday afternoon. But it continued the practice of many Texas Republicans of baselessly questioning Biden's victory.

The 38 electors made the call in a resolution that passed 34-4. The resolution also “condemn[ed] the lack of action by the U.S. Supreme Court" to overturn the election results. There was a brief debate among electors over whether they should keep language in the resolution denouncing members of the U.S. Supreme Court for “moral cowardice.” On Friday, the high court briskly rejected Paxton’s lawsuit that had become a vehicle for Republicans across the country to contest Biden’s victory.

One elector said the inclusion of the language makes Texas appear “childish, impertinent and angry.” An amendment deleting the language eventually prevailed.

Biden won 306 pledged electoral votes in the November election, but Trump — along with many Texas Republicans — has refused to accept defeat and waged a legal and political campaign to get certain swing states to undo the results. Typically, the meeting of the Electoral College is a mostly ignored formality. But Republicans’ continued disputes of the election have caused this year’s vote to take on a rare public fascination in 2020.

The resolution drew a mocking reaction from the Democratic lieutenant governor of Pennsylvania, John Fetterman.

"We’ll get right on that," he wrote on Twitter, followed by a post mocking the Dallas Cowboys.

New: Texas electors vote 34-4 to call on Legislatures in Pennsylvania, Georgia, Michigan and Wisconsin — whose election results handed the White House @JoeBiden — to appoint their own electors.

Numerous lawsuits filed by the Trump legal team claiming or raising questions of fraud were thrown out of state and federal court. Even so, Texas Attorney General Ken Paxton launched a last-ditch legal effort to overturn the election results last week, only to be soundly rejected by the U.S. Supreme Court.

Many leading Texas Republicans were supportive of Paxton’s effort. More than a dozen Texans in Congress signed an amicus brief endorsing Paxton’s tactic. Ted Cruz, the state's junior U.S. senator, agreed at the president’s request to argue the case before the high court if it were heard. The state’s senior senator, John Cornyn, questioned Paxton’s legal theory, however.

Meanwhile, state Republican Party chairman, Allen West, made national news after the Supreme Court’s decision by suggesting that states opposed to the ruling “should bond together and form a Union ... that will abide by the constitution.”

The next — and final step before inauguration — will be on Jan. 6, when the states send their votes to the U.S. Capitol, where they will be tallied in a joint session of the newly sworn in U.S. Senate and House. The Texas electors' resolution Monday urged lawmakers from the four swing states to object to their electors if they are not replaced by their legislators.

In most circumstances, electors follow the will of the state’s voters. But in 2016, two Texas electors refused to vote for Trump — one voted for then-Gov. John Kasich of Ohio and another cast a ballot for a fellow Texan, former U.S. Rep. Ron Paul. Their dissent triggered Gov. Greg Abbott to push for a bill that would “bind” Texas' Electoral College members to the result of the statewide popular vote. The measure failed.

In Texas, Trump decisively defeated Biden, but the margin — 5.6% — was the closest between the two parties since 1996.

Hours ahead of Monday’s meeting, even with Texas slated to deliver its votes to Trump, several Republicans suggested that the nation’s election results were not yet settled.

“The Electoral College is casting their votes,” tweeted U.S. Rep. Lance Gooden, R-Terrell. “Democrats will soon say it is time to move on. They are 100% WRONG. We should not move on until the massive claims of voter fraud are answered and addressed!”

U.S. Rep. Chip Roy, an Austin Republican, released a statement Monday afternoon saying “there's no question about the outcomes in Texas, despite the millions upon millions that Democrats desperately poured into races all over the place.” But followed up with a call for for answers to “some legitimate questions” raised about “what went on in” races in other states.

This article originally appeared in The Texas Tribune.

Millions yet to be spent in City of Austin funding for the homeless: Report