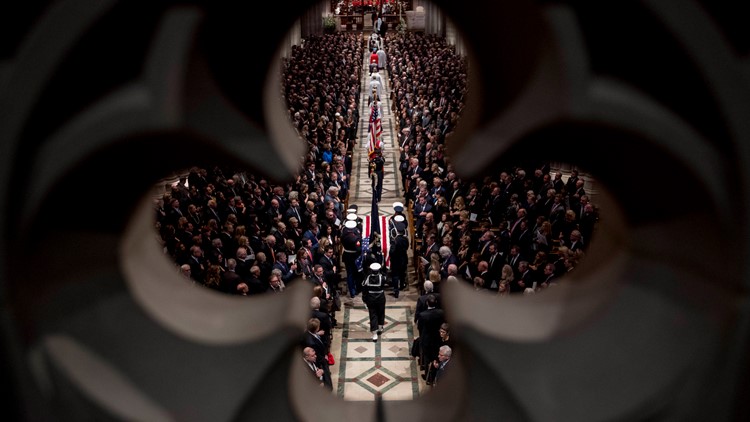 Photo by: Pool
The flag-draped casket of former President George H.W. Bush is arrives carried by a military honor guard during a State Funeral at the National Cathedral, December 5, 2018 in Washington, DC.

Tradition and Celebration: Breaking down the funeral service of President Bush

The funeral for former President George H.W. Bush may be one of the most watched services in American history with millions of Americans seeing the deep-rooted traditions of the Episcopal Church for the first time.
Author: Matthew Copeland
Published: 6:31 PM CST December 5, 2018
Updated: 10:19 AM CST December 6, 2018

Wednesday the National Cathedral, the seat of the church in the United States, welcomed presidents, congressmen and women, hundreds of other figures past and present and millions of Americans to collectively mourn the passing and celebrate the life of America’s 41st president: George H.W. Bush.

The highlights of the service were the moving stories and tributes to a man remembered for his humility, sense of humor and an unquestioned devotion to God. Playing the backing role for these tributes was the service itself, one deeply rooted in ancient tradition and theology.

“Many Christians have this word ‘Sacrament’ they use. Typically, the two big Sacraments are Baptism and the Holy Communion,” Rev. Matthew Boulter of Christ Episcopal Church in Tyler said. “But there’s the other rituals, or rites, that many Christians view as sacraments or at least kind of like a sacrament. And for us, one of those is burial.”

Many of the traditions seen during President Bush’s funeral are laid out in the Book of Common Prayer, a sort of guidebook to Episcopal services, among other things.

“It’s a beautiful service,” Rev. Boulter said. “It’s chalk-full of Scripture. It does open with the procession in with these wonderful words from John’s Gospel from the mouth of Christ himself.”

Rev. Russ Levenson, the Bush family priest and close family friend, offered Wednesday's sermon. Much of his sermon helped to humanize the former president, remembering him not as a former head of the state, but a man committed to God, country. family and friends.

“He was a very committed Episcopalian. We live our faith both in our words and our actions,” Rev. Levenson said during the sermon. “This is not a man who wore his faith on his sleeve. But he was a man who very committed to his church, to God, to the Christian faith. He was a man who was a friend to people of every faith, that was very obvious to everyone.”

However, intertwined with memories of President Bush was, to Rev. Boulter, a central idea of death to Episcopalians like the former president.

The service also typically involves a sermon, readings from Scripture and sometimes communion, though the Bush family decided not to include communion in the service. While the Book of Common Prayer lays out much of the service, the family has considerable influence on the service including music selection and readings.

“The priest will meet with the family, try to hear what their thoughts are,” Rev. Boulter said, “but the goal is for the service to be meaningful to the family.”

Family plays such an important role in the burial service because the service is not like normal church service. Rev. Boulter says it is a mixture of worship and tribute that makes no distinction between former president or nextdoor neighbor.

“Obviously it’s a worship service where we worship God. But it’s also a time of real remembrance and celebration, both grieving and celebration of the departed loved one,” Rev. Boulter explained. “It’s actually an Easter service. Just as Jesus Christ was raised, our mortal bodies will be raised from the dead."

While the church makes no distinction between president and neighbor, it is hard to underestimate the importance of President Bush and the office of the president. However, each person speaking at President Bush’s funeral remarked the role his faith played in his daily life and work. Rev. Boulter believes that faith helped guide President Bush through his life in public service.

“I do think that it is clear, from all sides, from everyone’s perspective, is he was a man of character. That is because he was formed in the Christian tradition. He was formed in the Christian faith,” Rev. Boulter said. “It was his faith, growing up in the church his hearing preaching of the reading of the Scriptures, it all of those things that gave him the deep sense of character and virtue, that’s sort of an old-fashioned word, that allowed him to make the decisions he made. And more than that, to affected the way he made them with kindness, with grace, with courage and with humility.”

The effect of President Bush’s character was nearly impossible to dispute as the mourners inside the cathedral embraced each other in a sense of neighborly love, regardless of party affiliation. Notably, the passing of candy from former President George W. Bush to former First Lady Michelle Obama, a running joke between the two, and the theme of President Bush’s friendship with the man who defeated him in the 1992 election, former President Bill Clinton.

“As the Western World and Western Civilization becomes more secular, there’s a great danger, it’s not all bad, there’s a great danger in leaving behind some of the things that makes us truly human,” Rev. Boulter explained. “The purpose of religion is to bind communities together, to bind communities together in peace. That has always traveled across political barriers, racial barriers, all of the sorts of barriers that divides people.”

President Bush will have a private funeral Thursday at his home parish in Houston for family and friends before being laid to rest next to his beloved wife Barbara and his daughter Robin on the grounds of the George H.W. Bush Presidential Library in College Station.