The interim report goes into detail about how the gunman went on a rampage that killed 12 and injured five others on May 31, 2019. But the "why" remains unanswered. 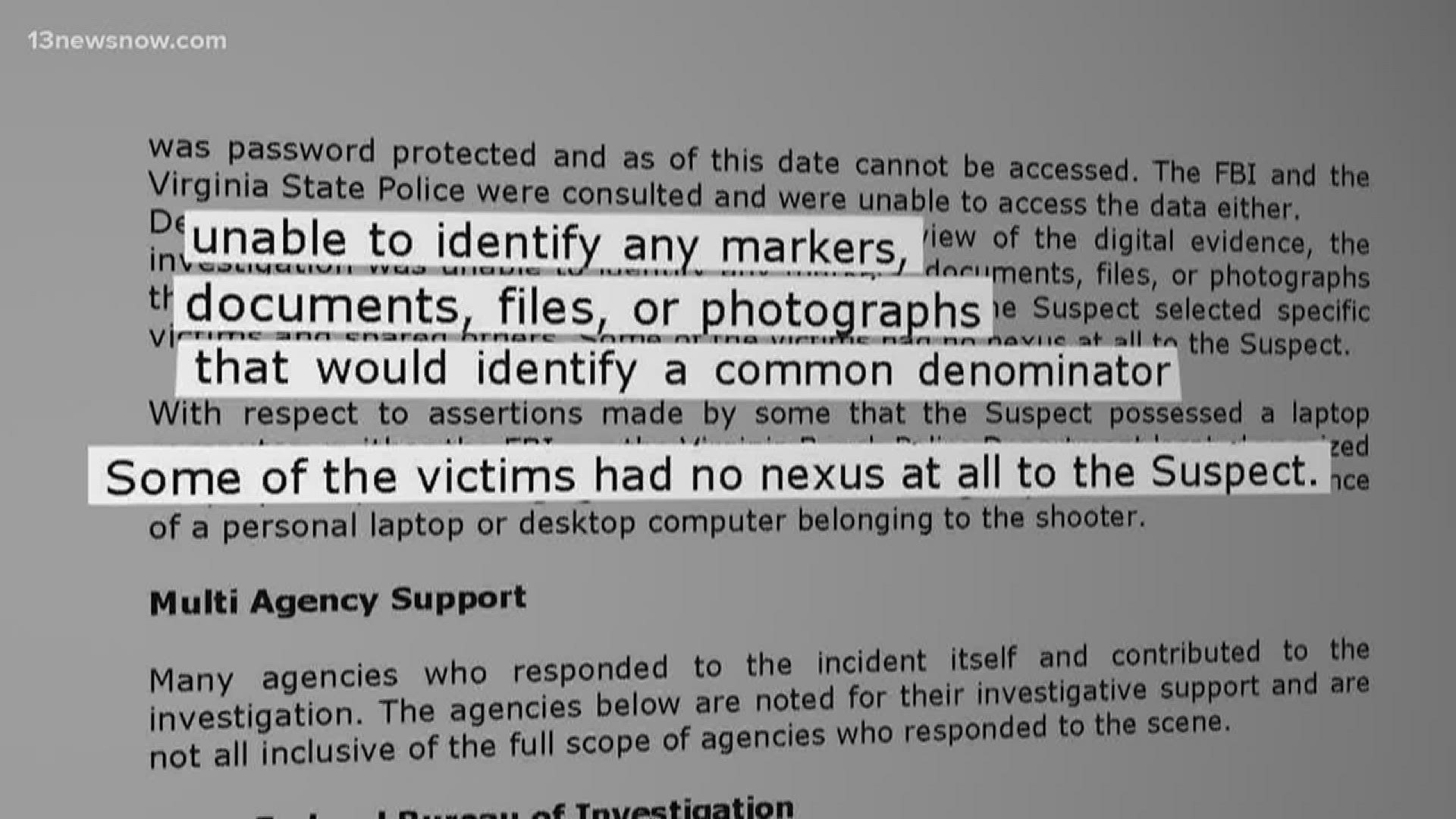 VIRGINIA BEACH, Va. — Virginia Beach Police are giving an update into their criminal investigation into the deadly mass shooting that took place at the Virginia Beach Municipal Center on May 31, 2019.

In an interim investigative executive summary, police go into detail about how Dewayne Craddock went on a rampage that killed 12 people and injured five others at the Municipal Center Building 2. But the big question remains unanswered: why did he do it?

"Our detectives have dedicated countless hours identifying the who, what, where, when, and how of this senseless tragedy," wrote Acting City Manager Thomas Leahy in his introductory letter to city council. "Unfortunately, the answer to 'why' may be something we will never know."

Virginia Beach Police said there is no reason "why the suspect selected specific victims and spared others.” The summary report rejects a theory that the shooter decided to kill coworkers based on a denial of a promotion, saying he never applied for a promotion and didn’t compete with shooting victims.

The summary says the suspect shot a homicide sergeant in the torso, who was evacuated to safety by a robbery sergeant.

It confirms that the police pursuit of the shooter inside Building 2 was delayed by a lack of key card access.

"The officers, at that time, did not have permission rights to key entry doors (Lenel) within Building 2," the executive summary says.

According to the report, one tablet from the shooter's home is password protected and "as of this date cannot be accessed."

VBPD reports making "more than 1,000 contacts and interviews" with "523 citizens and family members.”

The summary also details the challenges of the investigation, saying many witness statements were partially true and somewhat based on hearsay, which made "taking uncontaminated statements essentially impossible.” It also reports "the digital evidence in this case is vast and grew extensively as the case unfolded."

The police department's final report is expected in the fall, although the department now says it "is confidential and will not be released to the public."

You can read the police department's interim report below:

RELATED: An in-depth look into the full report of the independent investigation into the Virginia Beach Municipal Center shooting