The lawsuit says Sgt. Robert Shugart allegedly threatened and intimidated troopers to keep them from reporting the system. 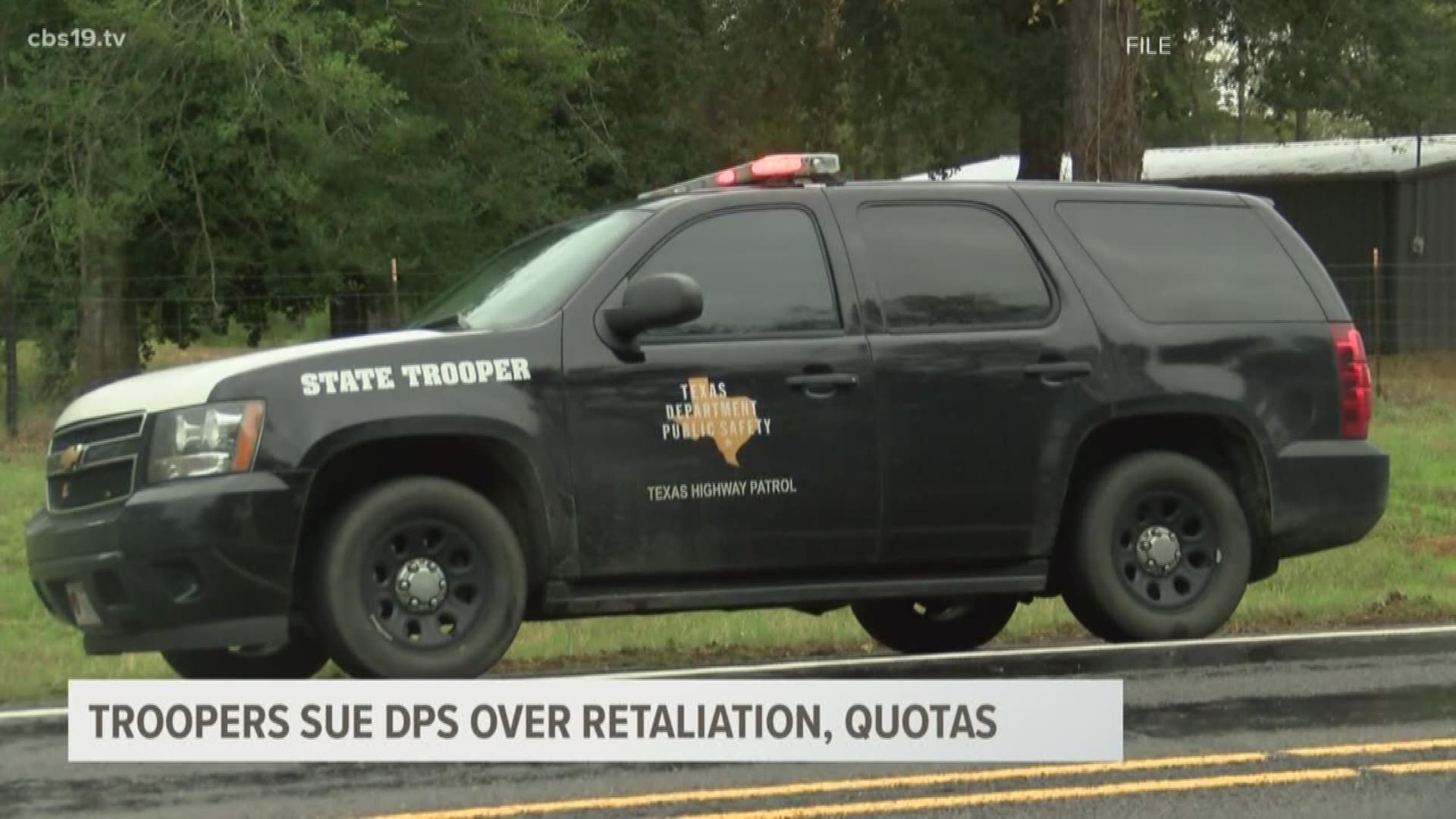 NACOGDOCHES COUNTY, Texas — Four troopers out of Nacogdoches claim they tried to stop an illegal ticket-writing scheme in their office, but as a result, they were harassed and their careers were derailed.

Now they are suing the state.

The complaint filed in federal district court by troopers Joel Barton, John Henley, Rodney Mahan and John Riggins in Lufkin says the Department of Public Safety violated whistleblower laws and the First Amendment. Their lawyers say their trouble began two years ago when the foursome reported to the Office of the Inspector General that Sgt. Robert Shugart implemented a quota system, in which they refused to participate.

“We started at that point trying to do it internally, going through DPS, going through the proper chain of command to report the quota system the gift system, the retaliation, the hostile work environment," attorney Sean Hightower said. "At that point, it was really just hostile work environment. The more we reported, the more retaliation that happened.”

“The DPS was offering prizes, gift cards, for whoever had the most criminal arrests,” Tanner Franklin, the troopers’ co-counsel, alleged. “I think you can see in our complaint, in February (2019), the captain—who’s in charge of this entire region—came to Nacogdoches and they held an award ceremony where they handed a plaque and a gift card to the trooper with the most criminal arrests.

“We should not be incentivizing troopers to just make arrests for the sake of making arrests.”

The troopers, who have a combined 89 years of experience, claim that Sgt. Shugart made their lives miserable when he found out about their call for an investigation.

“I mean, he would ridicule them, scream and yell at them in front of other troopers, tell them they were the worst trooper ever, you know, that he’s ever seen,” Franklin said. “These are senior-level troopers. They have years of experience; they have exemplary records.”

“They also denied benefits, they denied promotions,” Hightower added. “We had one instance where a trooper put in for a promotion that he was eligible for and qualified for. All he needed was his supervisor, Sgt. Shugart, to sign that piece of paper, acknowledging receipt of it and send it on up the chain of command. Because the sergeant chose not to even sign the receipt that he received the request, that trooper was denied that promotion right there, just purely out of retaliation.”

Two of the troopers were transferred from Nacogdoches to Crockett, more than an hour away, which Franklin said they did not ask for and would likely have been approved by Sgt. Shugart’s superiors.

Franklin said the transfer had dire consequences for one of them.

“He was in a serious wreck because of fatigue, because he was having to drive back and forth those long distances,” Franklin remembered. “It could have cost him his life.”

According to court documents, on May 6, 2020, DPS sent a memo to the troopers saying that it concluded its investigation that their complaints against Sgt. Shugart were true. While the penalty prescribed by Texas law for implementing a quota system is to lose one’s position, the troopers say Sgt. Shugart’s punishment was a three-day suspension.

“When the troopers met with their supervisors to go over that letter that said that these complaints were sustained,” Hightower said. “They were given copies of policy manuals that said they were forbidden to speak about this matter at all, to discourage them telling the truth about what happened.”

The complaint alleges that Sgt. Shugart used the same quota system during his time in charge of the DPS offices in Jasper and Center. In April, 2019, the Shelby County District Attorney sent a letter to the head of the criminal prosecution division within the Texas Attorney General’s Office requesting an investigation into Sgt. Shugart’s activities, but Hightower and Franklin say nothing has come of it.

“The whole system knew about it,” Franklin said. “Senior-level members of DPS knew about this and tried to whitewash the whole thing, tried to sweep it under the rug, because they didn’t want DPS to look bad.”

Hightower says the troopers initially decided to report Sgt. Shugart to OIG because, with their tenure and ranks, they felt more confident in their ability to speak up than a younger trooper would.

“I mean, they took an oath to protect and serve and that’s exactly what they did,” Franklin explained. “And in return, they were retaliated against for reporting criminal wrongdoing.”

The lawsuit says the troopers seek to have Sgt. Shugart removed from his position, protection from further retaliation, and money to cover lost wages due to promotions that were not granted and for emotional damages.

“Since we filed this suit, just in the two or three days, Sean and I have actually received calls from troopers all over the state with similar issues! I mean, that, to me, was shocking," Franklin said. "Not only is something happening right here in Nacogdoches, it’s something that’s occurring other parts of the state and DPS supervisors are fully aware of it. And they’re doing nothing about it.”

A spokesperson for DPS told CBS19 it would not comment on pending litigation.

You can read the full lawsuit, including the claims against DPS, below: