CBS19 has learned there will be a protest Saturday at Broadway Square Mall. 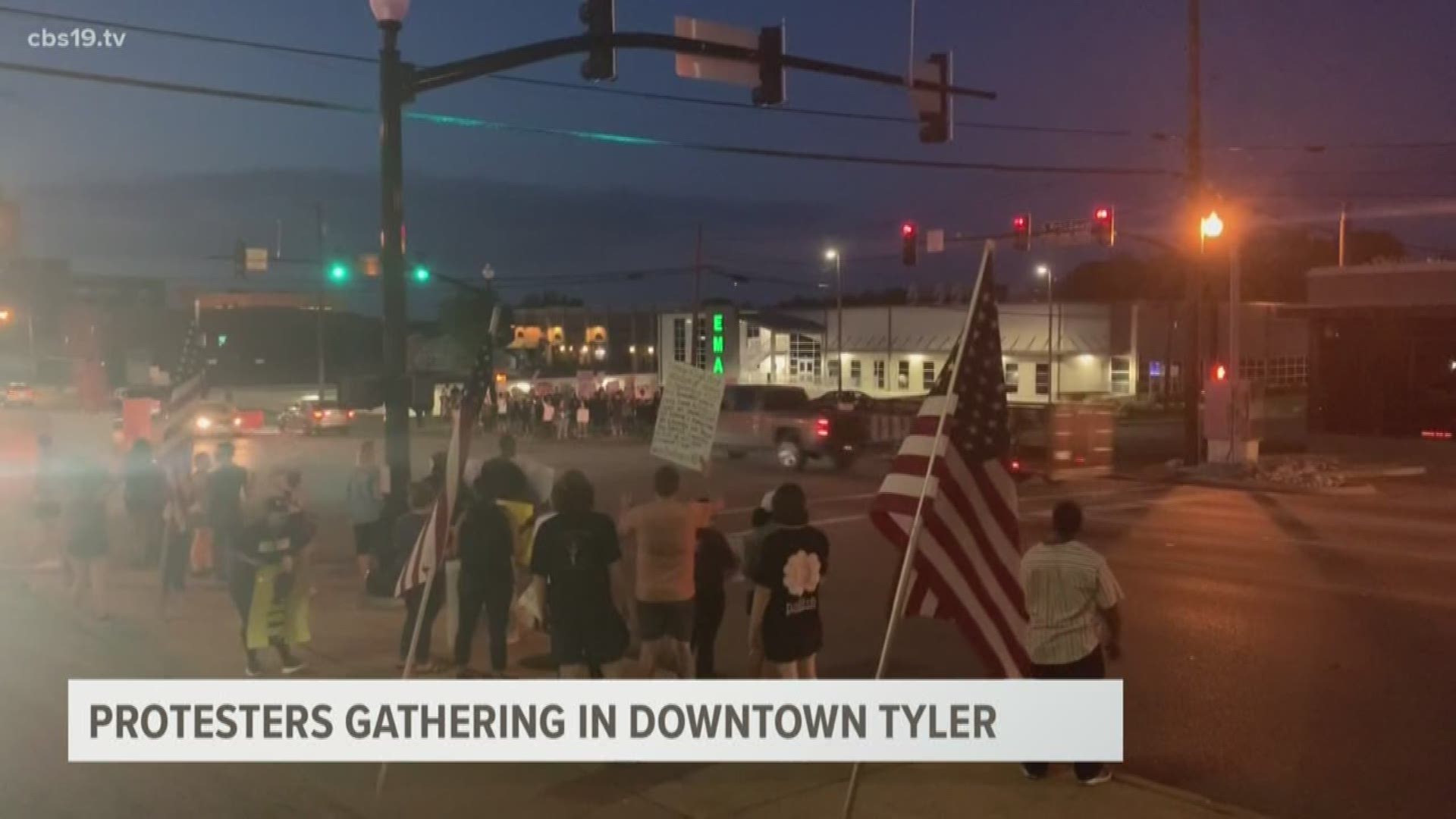 TYLER, Texas — Protesters are expected to congregate at the Square in Downtown Tyler for a fifth consecutive day in response to the recent killings of African Americans by police including George Floyd and Breonna Taylor.

At it's height, around 150 people were at the protest, which included two marches to Front Street. Many of the protesters left by 10 p.m. without any violence or major traffic problems.

At 5:30 p.m., the Tyler NAACP chapter held a press conference at the Square across from the courthouse. The organization spoke out again police departments that accept police brutality.

Around 100 people were on the Square for the press conference, many again brought their signs for the demonstration. The crowd is mostly young adult and split between races.

At the conclusion of the press conference, many people stayed at the Square for a fifth night of protest. The NAACP was not involved in the protest.

The crowd stood on either side of Broadway Avenue before marching south through downtown. As the crowd march, they chanted "George Floyd!" and "No Justice, No Peace!" There was also a voter registration table set up to help people vote.

The crowd stopped during the march and turned their attention to the road. They continued to chant as some passers-by honked their horns in support.

The #TylerProtests continue for the fifth day in a row. Close to 100 people are marching down Broadway Avenue chanting and holding up signs support the Black Lives Movement.

Officers are on the scene to help ensure the safety of the protesters.

Meanwhile, some of the protesters have broken from the main group to stand on individual street corners to hold up their signs. The protesters are still in the sidewalk and have not moved onto the street.

The main group of protesters on the corner of Broadway Avenue and Front Street. The large crowd is standing on all four corners of the intersection on the sidewalk.

After several minutes, the protesters returned to the square, where they knelt along Broadway Avenue. The protesters held their signs in the area while one of the organizers led the crowd in chants.

One of the protesters laid on the ground, putting his hands behind his back, as the crowd chanted "Get your knee of my neck!"

Shortly before 9 p.m., the protesters began a second march down Broadway toward Front Street. Once again, the protesters held up signs and chanted as cars passed by them

HAPPENING NOW: Protesters are back on the corner of Front Street and S Broadway Avenue. Payton Weidman CBS19 gives us a look at what’s happening.

As 9:30 p.m. approached, police began to block of some roads to help protect the protesters.

By 10 p.m., most of the protesters had returned home for the night. Those that remained gathered at the Square.

Protests are expected to continue at the Square for the remainder of the week.

Organizers tell CBS19 there will be a protest Saturday at Broadway Square Mall. Organizers say they plan to peacefully march to Rice Road before returning to the mall.

One of the protesters told CBS19 the reason for the change in location is that protesters feel they have been confined to the Square and want to move the demonstrations outside of downtown.

There is also a protest planned Sunday to remember Victor Fuentes, who was killed by Tyler police in 2013.

The protesters say they will continue to protest police brutality, even after all four officers involved in George Floyd's death have been charged in his death.

After four days of protest, no violence has erupted from protesters, bystanders or police. The Tyler Police Department and the Smith County Sheriff Larry Smith say they welcome the protests if demonstrations remain peaceful.