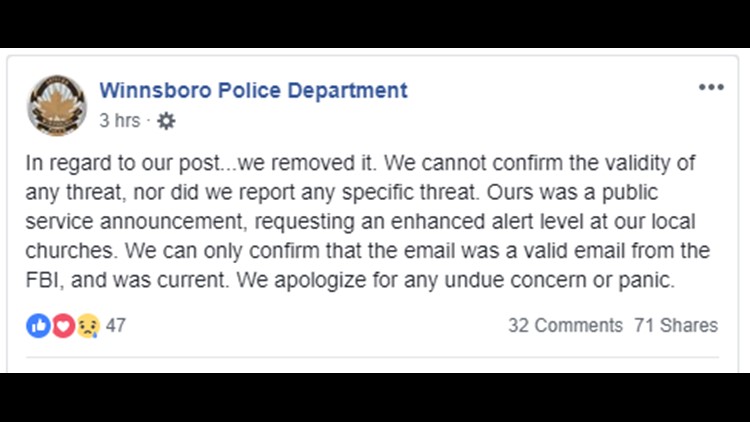 WINNSBORO — UPDATE: As of 6:30 p.m., the Winnsboro Police Department removed their previous post mentioned in the story below.

They posted another status to their Facebook page here.

According to the Winnsboro Police Department, officials have just received "broad-based" intelligence information from the Federal Bureau of Investigation indicating there may be attacks on Texas churches from "lone wolf" ISIS members.

According to the FBI's Joint Terrorism Task Force, the threat was posted to social media by a pro-ISIS Twitter user on Friday, December 7. The twitter user, identified by username @dawlawiforever, posted an ISIS media graphic urging lone wolf attacks against churches in the United States, specifically naming Texas, and indicating attacks would occur very soon.

Captioned with the media images were the phrases #church_target, #USA, #Texas and "very soon" with a flame emoji. One graphic posted included the statement, "we wish you a happy Sunday."

Miami served Twitter with a §2702 emergency disclosure request, however, Twitter declined to provide records citing lack of threat specificity and imminence. Twitter was ultimately served with a grand jury subpoena on December 8.

Authorities are asking churches to have security teams on alert the next few weeks and the WPD says their officers will be on alert, as well.