VERIFY: Are more Texas teachers writing wills due to fear of getting COVID-19 if schools reopen?

A national article with an evocative headline may not be telling the whole story. 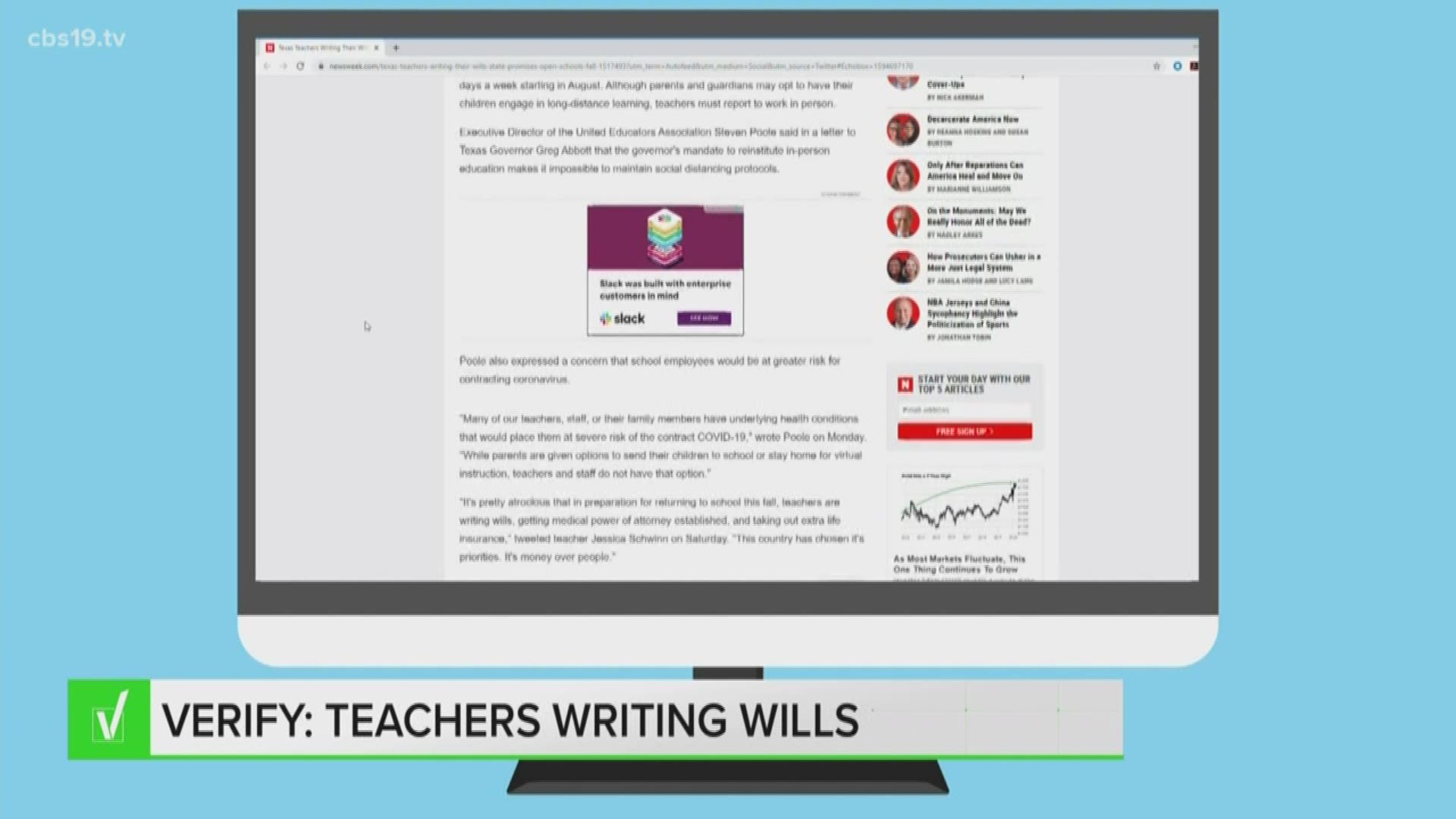 TYLER, Texas — As Texas schools consider whether to reopen, an article from Newsweek stunned people across the country with the headline, “Texas teachers writing their wills as state promises to reopen schools in fall.”

However, the article was based on limited information, so CBS19 set out to verify whether it is true that more teachers are preparing for their deaths due to potential exposure to COVID-19.

Newsweek published the article on Monday as it described a dire situation in the Texas education community. The headline that gave so many readers a lump in their throat was based on one tweet from a woman who says she is a teacher.

CBS19 asked Kline Pillow, an attorney with Ross & Shoalmire who specializes in estate planning, if he has seen anything similar. He says there has been an increase in people wanting wills and power of attorney papers, though not necessarily an increase in teachers.

“But we have seen an influx of health care workers that have wanted to get things in place,” he said. “As they’re out there more on the front lines of dealing with the pandemic.”

Pillow says he took few calls from clients in the first weeks of the pandemic, but once Governor Greg Abbott gave some businesses the OK to reopen, business picked up.

"Normally, what we’ve seen is: when someone has someone close to them, or a family member, experience some form of a sudden death, or they’ve had to deal with their parents’ estate, that’s typically when people think, 'I need to get that in place,'" Pillow explained. "Here, we’ve kind of had more of a nationwide pandemic that’s really put that planning to the forefront of people’s minds."

Pillow says fewer than 40% of Americans have estate plans in place, including a will and documents that power of attorney for medical and financial affairs. He says that if someone thinks they need to make plans but do not have much in assets, they can write their own will, which is legally valid in Texas.

"If you have more, if you have a larger family, if you have a blended family, it’s gonna be best that you visit with a professional," he said. "Who can really get your plan in order to where there aren’t any hiccoughs later."

Pillow says Gov. Abbott eased regulations to allow documents to be notarized while the parties observe social distancing. "Besides the online notarizations and the video notarizations," he said. "We’ve actually had to sign documents through a window at a nursing home. We’ve had someone come out of an assisted living facility and do a signing out there in the parking lot."

The idea of estate planning may be fresh in people’s minds because of COVID-19, but Pillow mentioned that attorneys have always stressed that people make plans sooner rather than later. "I would just encourage people to—when we get past this—to still understand that there are certain things you need, and don’t put those things off because you never know what could be around the corner for you," he said.

If you see a rumor or claim you would like verified, send an email to David Lippman at dlippman@cbs19.tv.