A video posted by Van ISD appears to show a Brownsboro football being burned in effigy. The social media response was almost universally negative. 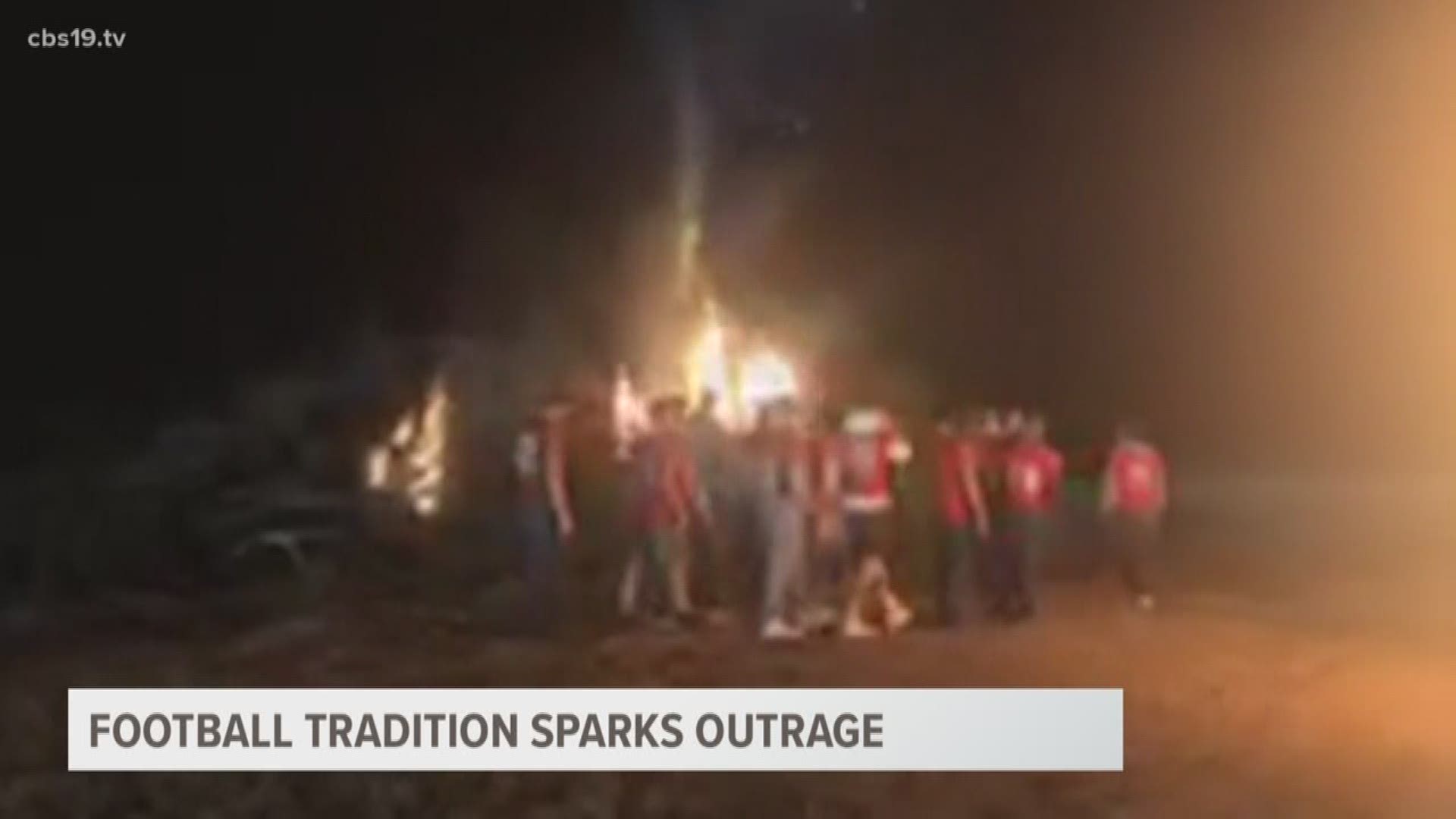 Video posted to the Van ISD Facebook page appears to show the depiction of a player tied to or hung from a stake surrounded by brush. Players from Van lit the brush as students chanted, "Light him up!"

The videos of the bonfire on Van's Facebook page have since been deleted.

The depiction was supposed to be the Brownsboro quarterback, who is black, leading some to call the depiction racist.

On social media, several people expressed outrage by the bonfire.

One person claimed their cousin's picture, who plays for Brownsboro, was hanging in the locker room:

"Oh so Van coaches are fine with a hanging? I know 1 thing my cousin better not get hurt since we have a video of his picture in the locker room Van Isd Better become aware of it asap. Van Coaches since you ok'd a picture of my cousin's in the locker room they better not get hurt tonight I'm all for a rival game but when you single out certain players your putting them in harms way I hope Van coaching staff see this our family get hurt behind stupidity tonight some one will pay."

Another person responded to the video saying:

"Why in the hell are you hanging a mock of a Brownboro player up and burning it!! That has to be one of the most distasteful unprofessional unsportsmanlike things I've ever seen! VISD should be ashamed. I think they owe BISD a public apology!!!"

CBS 19 reached out to Van ISD for comment. The district released the following statement:

The Vandal Bonfire is a long-standing tradition in Van ISD that dates back to the 1940s. When this tradition began, our bonfire was constructed by senior students; however, after an incident in the mid-2000s when a student broke his wrist during construction, the district decided to halt the tradition. In 2017, the bonfire tradition was reinstated with the construction process handled by Van ISD staff rather than students for safety reasons. Our community and alumni have been very excited to see this beloved tradition return. After videos of the bonfire posted by the district on social media following the bonfire last night, comments arose in the thread accusing the district of racism. Historically, the number on the player’s jersey at the top of the bonfire has always been the same number as the opposing team’s best player. This is by no means a racial issue and never has been. Van ISD would never promote, condone, or allow this long-standing tradition to target an opposing team or player because of their race. We understand that some people who are not familiar with our bonfire tradition could misinterpret photos or videos they may have seen on social media due to the current charged social and political climate. For this reason, future bonfires will not include a mock football player of the opposing team. We sincerely regret if anyone was offended by this tradition that has always centered around good-natured school spirit between rival teams and are saddened that that the character of our upstanding school community has been called in to question.

Van police confirmed with CBS 19 there will be extra officers at Van's game vs. Brownsboro Friday night to ensure security.