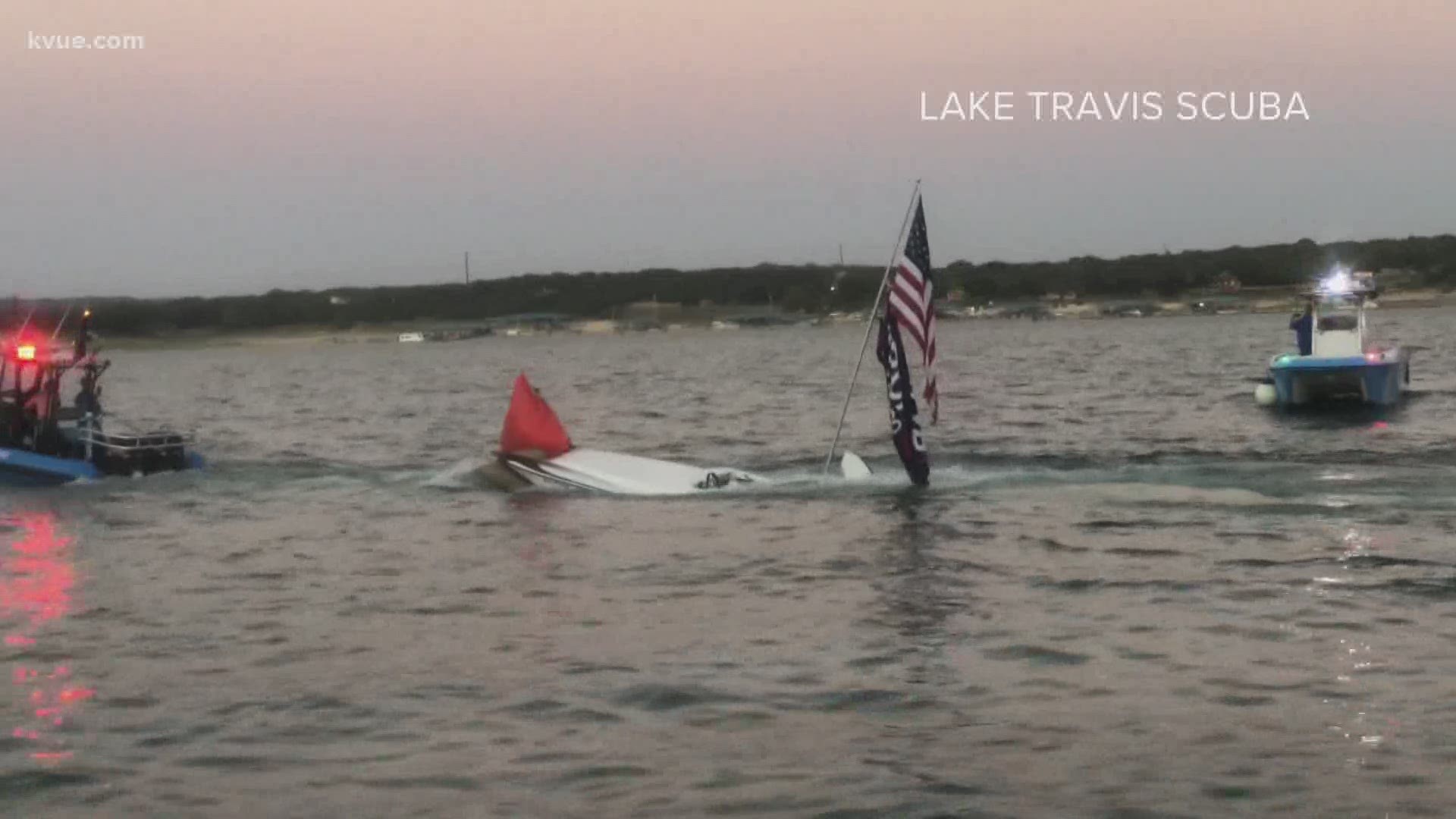 AUSTIN, Texas — On Monday, crews helped recover one of the boats that sank during Saturday's parade in support of President Donald Trump.

The small boat sat for two days at the bottom of the lake near Lakeshore Ranch. Its U.S. and "Trump 2020" flags still waved underwater.

The boat was one of five that the Travis County Sheriff's Office said sank.

"Weather conditions on Lake Travis were calm. When a large number of boats began moving together, the wakes generated large waves in areas where participating boats were dense," the sheriff's office said. "TCSO has found no evidence of foul play associated with any of the incidents."

Lake Travis Scuba owner Robert Weiss, along with diver Brian Waddell, helped recover the submerged boat, thanks to the help of his scuba boat's sonar and a nearby homeowner who saw the boat sink.

Once the bags were clipped under the boat, the crew at Flagship Towing pulled the boat out of the water and out of the lake.

Saturday's parade drew in hundreds of boats of all sizes, but Weiss said the boat they helped recover shouldn't have been there.

"They got caught up in the waves that were in excess of what their boat can handle," he said. "It was smart of [the owner] to get out of the way and try to pull it out [of the parade's route]."

It's a good thing they got the boat out quickly, too.

"The boat [Monday] had fuel starting to bubble out of the engine, so that can get pretty bad. You don't want that happening," Weiss said.

The boat's owner told Weiss he plans to refurbish it and put it back together. Weiss hopes what happened during the parade serves as a lesson to other boaters.

"I think the biggest lesson to take away from this was the proper size boat and putting the proper number of passengers on and not overloading your boat, and being aware of the ability of your boat in the conditions that you're in," he said.

The parade received a lot of criticism on social media after news spread that boats sank during the parade. But Weiss said this could've happened anywhere.

"It doesn't matter whether it was a Republican or a Democrat parade or any other parade type. It could have happened to any parade because of the number of boaters out there and the conditions on the water, and the people that had less than the suitable equipment to be out there."

On Saturday, sheriff's deputies responded to calls of multiple boats in distress about 12:15 p.m. during the parade. Those calls included reports of vessels taking on water, stalled engines, capsized boats and boats sinking.

According to a Facebook page for the event, more than 2,000 people had planned to attend with more than 5,000 interested. No injuries were reported.

Many other similar events in support of the president have been taking place across the U.S. in recent weeks, including some in Florida and California.

Back to school like we haven’t seen before: Austin ISD returns to class