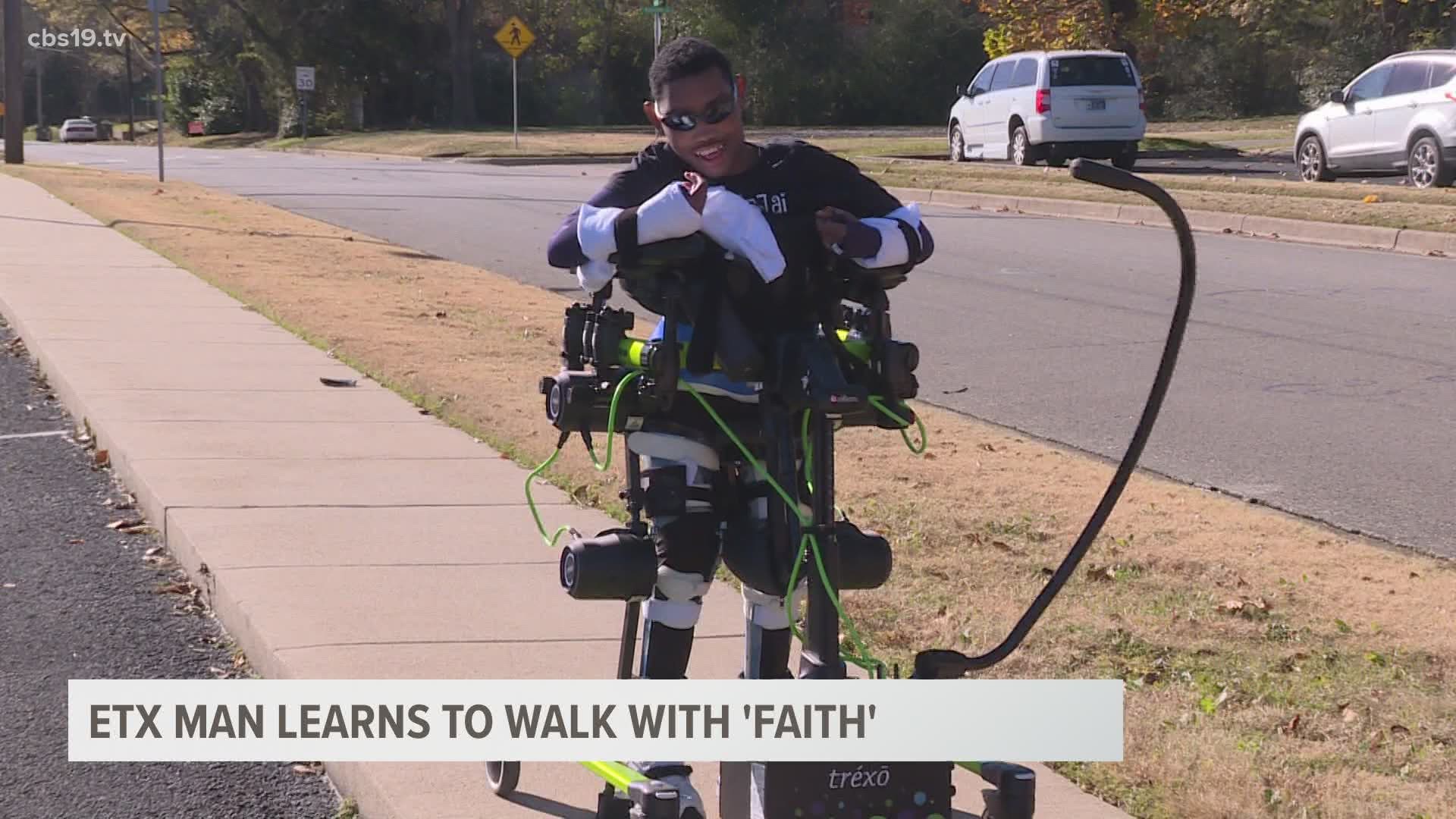 TYLER, Texas — One step at a time. That was Team DeJai's original motto for 23-year-old DeJai Mitchell when he first started to learn to walk with the help of his exoskeleton "Faith."

His mom, Onissa, says he's been confined to a wheelchair most of his life, until last November.

In November of 2019, DeJai received "Faith" and began his journey to walk. Onissa says she discovered the device thanks to her other son, AJ.

"AJ found it on the internet," Onissa said. “He already knew that once he sent it to me, I wasn't going to stop until we got it.”

When DeJai first started out, his max number of steps was around 285. Despite not being able to practice for about five months due to the pandemic, DeJai's well past one step at a time.

It’s been 1 yr since DeJai Mitchell got his exoskeleton, allowing him to walk for the first time. The pandemic kept him indoors for months, but he hasn’t let that stop him from taking it one step at a time or 27,000 in 30 mins. Learn more about DeJai’s journey tonight @kytxcbs19 pic.twitter.com/9Oud6g1OwI

Not only has his walking improved, but so has his confidence. Onissa says it's thanks to the addition of "Faith" to Team DeJai, which is made up of his family, therapists and anyone who supports him.

"He's a social butterfly," Oissa said. "Even if he's never able to stand on his own two feet and walk without assistance, at least if he's able to walk with the assistance, that has opened up so much more doors for him. [It]allows him to get out into the community more, to be more social."

DeJai also has osteoporosis and Onissa says a bone density test showed his bones compared to that of a 90-year-olds. Since he began walking his bones have shown improvement.

"When we take him out of the robotic device and put him in the manual gait trainer, his stride man, his determination to move, his legs are moving a heck of a lot better than it used to be,” she said.

Team DeJai goes out two to three times a week to practice walking. Onissa has set a goal in hopes her son will be able to walk without her assistance into his brother's football game next year.

"That's how we got here, faith and faith is what's going to keep us going," Onissa said.

The family has set up a GoFundMe page for anyone who would like to help DeJai's journey of learning to walk.

RELATED: Great-grandmother in quarantine tears up at heartwarming sign

RELATED: Chapel Hill ISD raises money for kids to get new shoes for the holidays