"There are many apps out there that parents can choose from. One that is used is the 'Bark' app, and it allows parents to monitor students’ social media use." 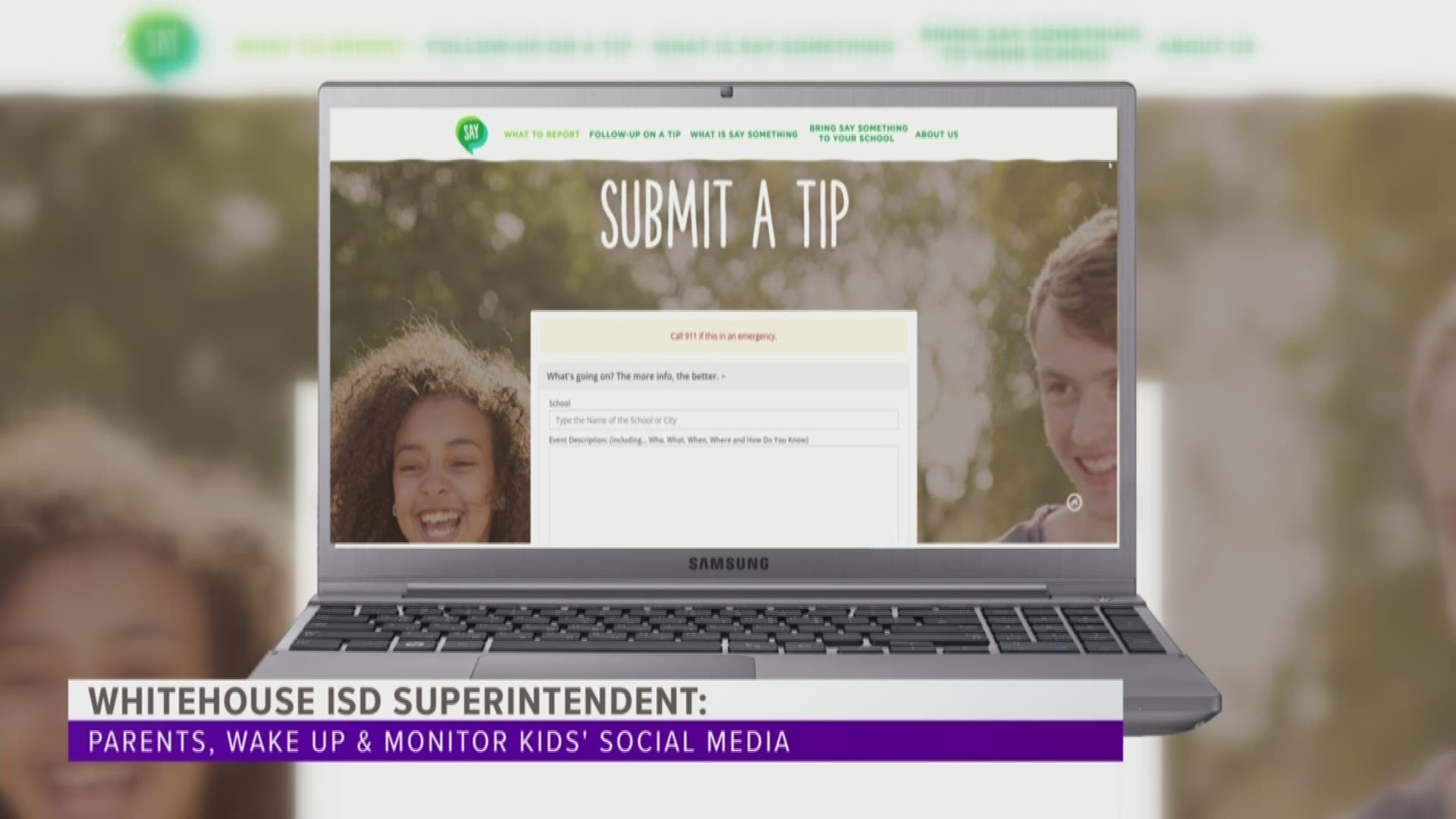 WHITEHOUSE, Texas — During an investigation into a social media post claiming a student had made threats to the high school, administrators of the Whitehouse Independent School District uncovered a case of cyber bullying targeting one of its students.

RELATED: Threat made against Whitehouse ISD to be 'non-credible'

"What we found is that a student not enrolled in Whitehouse ISD was bullying one of our students in our district using Snapchat," Whitehouse ISD Superintendent Christopher Moran said.

According to Moran, he and his staff were made aware of the post late Sunday night. The district, along with the Whitehouse Police Department, quickly verified the threat to the school to be non-credible.

However, Moran says the district and police are continuing to investigate the extent and historical nature of the bullying between the two students.

"It's easy for them to get lost in that world of online social media, which is not real," Moran said. "The social media activity is certainly a troubling area for us at school."

Moran says both students are cooperating in the investigation. It will be up to law enforcement to decide if any charges are issued.

"We are encouraging parents to wake-up and monitor their social media accounts for their children," Moran said.

It is a plea he submits not only as an educator, but also as a father.

"I think it's something that most parents are not fully aware of and it's a dark place for a lot of teenagers," Moran said.

Whether it is Snapchat, Facebook, Twitter or Tik Tok, Moran wants to be clear: The concept of online responsibility does not solely fall on students.

"My wife and I have four children, and we monitor our children’s social media accounts," Moran said. "There are many apps out there that parents can look at and choose from. One that is used is called the 'Bark' app, and it allows parents to monitor students' social media use."

Bark is marketed as, "the smart way to keep kids safer online." According to its website, in partnership with parents and schools, 10,000 severe self-harm situations have been detected and 16 school shootings prevented using the app.

"There’s a lot of communication going on between students that parents are and it’s just going to require parents to be more diligent to monitor their children’s activity online," Moran said.

The social media wave has prompted Whitehouse ISD to take proactive measures to protect its students.

In recent years, it has implemented utilization of the Say Something app and website. It allows parents, students, school staff and community members to report any suspicious behaviors, safety concerns, or inappropriate online engagement.

"I think everyone is interested in having safe schools, and their eyes and ears are our best defense," Moran said. "The Child Advocacy Center of East Texas has also been working closely with us to educate students and make sure that they're aware of the proper reporting procedures and what to watch for."

Moran says another part of maintaining a safe school district is addressing the mental health of its students.

As a part of the program, mental health counseling interns studying at the colleges will visit schools within Whitehouse ISD to offer free counseling services to students and staff.

"The mental health counselling program is really born out of the school safety conversation. we believe that interventions early with students that have behavioral or emotional needs is our best defense," Moran said.

The district is also working with the Child Advocacy Center of Smith County to setup a social media training for parents. The date of the training has not yet been decided, but Moran believes it will serve as a good resource for the community.

"Understand what the social media apps are, what to look for, how to respond to that, how to monitor. Really it comes down to parents need to be really aware of what’s going on their child’s device, because it’s not only a phone," Moran said.

He hopes early intervention will help eliminate the concerns often mentioned in every school conversation, and address the question, 'How could we have stopped this?'