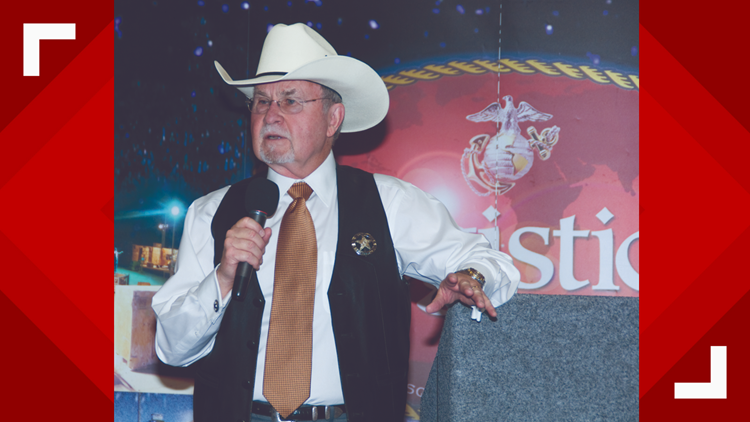 SMITH COUNTY, Texas — Everything is bigger in Texas, including Sheriff J.B. Smith’s personality.

A veteran detective of Smith County, Texas, he knows what it’s like to encounter larger-than-life crimes, and he knows he needs the best of the best at his side to solve them.

Smith and his handpicked team of detectives, Pamela Dunklin and Joe Rasco, are here to show that when it comes to Smith County, Texas, if you’re going to do the crime, you will do the time.

Each member of this crime-fighting trio has skills designed to perfectly complement each other:

Dunklin leads with her intuition and is not afraid to get down deep into the details; Rasco is the thinker and the feeler of the group, using his analytical mind and empathy to get the core of the crime; and, with Sheriff J.B. Smith as the fearless leader of the unit, Dunklin and Rasco are empowered to tap into the skillsets that put them on the force.

In the all-new series LONE STAR JUSTICE, this group recounts their most memorable cases, proving once and for all that in the state of Texas, no one is above the law of the land. LONE STAR JUSTICE premieres on June 5th at 9 p.m., only on Investigation Discovery (ID), America’s leading destination for true-crime programming.

“Here at ID we are always looking for fresh stories and experts from across the country,” said Henry Schleiff, Group President of Investigation Discovery, Travel Channel, American Heroes Channel and Destination America. “With Sheriff Smith, Detective Dunklin and Detective Rasco – and, like with any team of real-life superheroes – it is clear that their greatest strength lies in their differences: we are thrilled to bring this dynamic trio’s unique brand of justice to life on ID.”

In the six-part series each hour-long episode focuses on a different case that occurred within the team’s county, retracing the crime scene, the evidence, and the power of deduction it took to bring a killer to justice. Through in-depth interviews and detailed recreations, the detectives talk through the case, with interviews from victims’ friends and family, news media, and other law enforcement weaved throughout the episode. The eventual culmination of the case is shared with exacting detail, proving that if you go down a dark path in East Texas, Sheriff J.B. Smith, Detective Dunklin and Detective Rasco will be right on your tail.

“She Had Everything” premieres Wednesday, June 5th at 10/9c

In 2010, the bullet-riddled body of 19-year-old college student Amanda Anderson is found by her younger sibling, Nate. With few leads, J.B., Pamela and Joe spring into action. They split up to interview friends, known criminals, and every possible lead. However, it is a minute crime scene detail spotted by forensics that leads to the case’s shocking conclusion.

A woman comes to the Smith County Sheriff’s department and begs Detective Joe Rasco to reopen the unsolved murder of her aunt. Despite the case being 25-years-old, Joe and the team embark on a quest to re-examine old suspects and track down long lost evidence that could solve the case and finally secure justice for a forgotten victim.

A distraught woman calls 911 to report that her husband, Calvin Fields, has taken his own life. It’s an open and shut case, ruled quickly as a suicide.  However, a discovery by a mortician leads detectives to suspect murder. With precious time lost, it’s a race for J.B., Pamela and Joe to collect evidence and dig into the Fields family’s not-so-perfect life.

Jeff Joplin, a well-liked and popular resident of Tyler, Texas, fails to show up for a scheduled family dinner. When his father goes to check on him, he is horrified to discover Jeff’s lifeless body - beaten, strangled, and stabbed to death on the floor of his home. Although it initially looks like a robbery, it is a witness’ recollection that unravels a morbid conspiracy of love, greed, and murder.

It’s a case that went unsolved for 13 years. On a quiet morning in 1999, a dog walker discovered the body of 18-year-old William Young II, dead from a single gunshot. The investigation leads to two main suspects, but the lack of conclusive evidence and testimony brings the case to a standstill. Years later, the Lone Star Justice team thinks time and maturity may be exactly what they needed to get a witness to talk.

This was a case that would consume not only the Tyler and Smith County authorities, but the US Marshals and FBI. When two unrelated murders are traced to a violent pair of siblings, investigators are led on a wild goose chase, starting in Texas but then spanning across two countries.