Mental Health and First Responders: Helping those who help us

"We just don't think we're allowed to do that we're not allowed to be upset, we have to stay strong for everybody else,” said Smith County Fire Marshal Jay Brooks 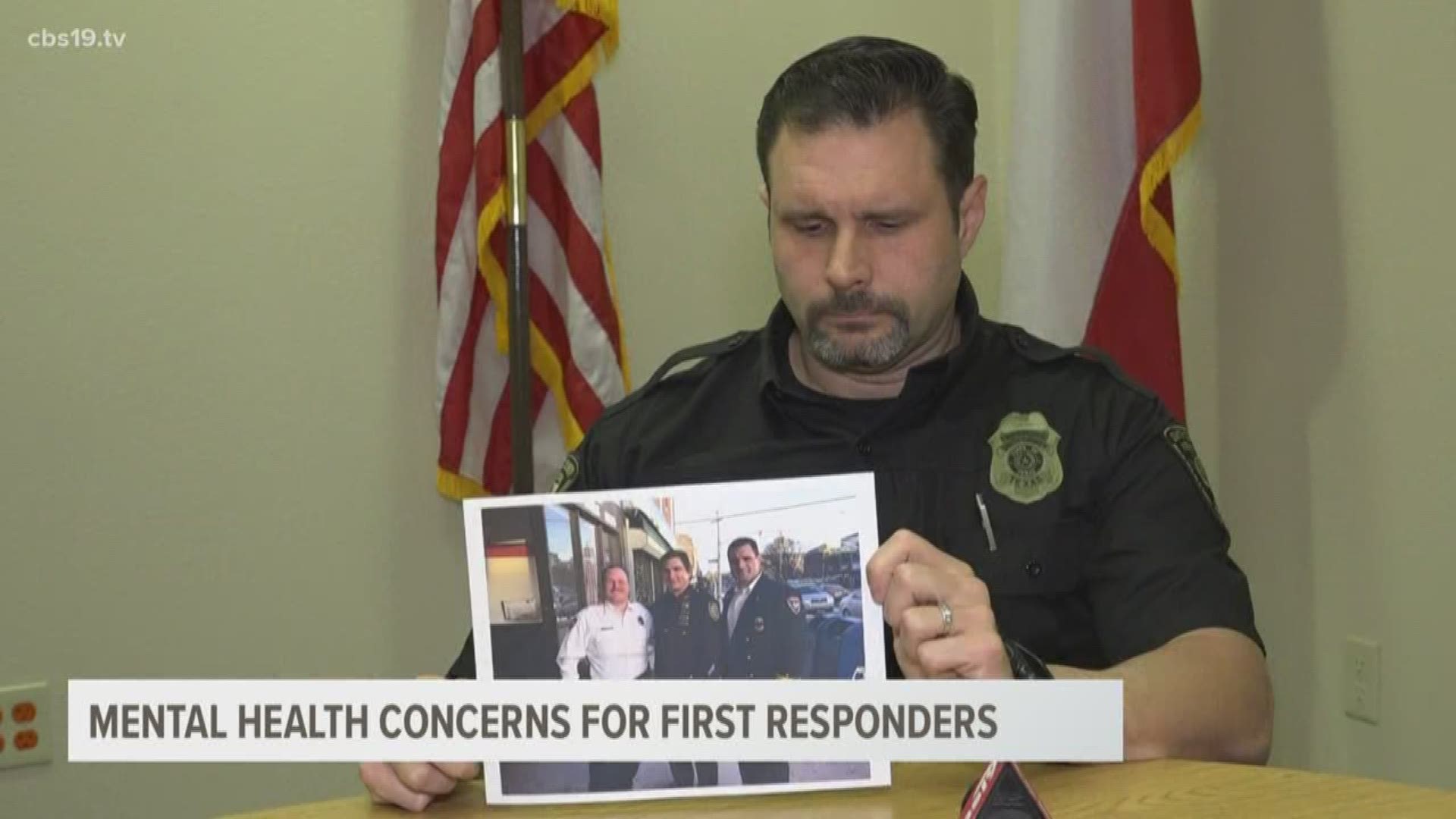 TYLER, Texas — Mental health issues are a problem for every part of our communities. However, there is one group of people who often don’t seek help when they need it, for fear of the impact it could have on their jobs, or because of the stigma of weakness associated with receiving counseling.

These people are our police, firefighters, and other first responders. One Smith County official is speaking out about this issue following a tragic event in his own life.

In 2014 Smith County Fire Marshal Jay Brooks was in New York City to attend the funerals of two NYPD officers who were murdered in their squad car. That’s where he met his good friend, NYPD officer Dan Shirreffs.

“He took us around New York and showed us some of the sites and then we ended up going to a restaurant where I found out that, ironically enough that that Dan's son was here, or actually both of his boys were here in Tyler, Texas," said Brooks.  "And so we had that that common bond. And that evening, we ended up going to the 9/11 Memorial where I found out that Dan himself was a 9/11 survivor and had been at Ground Zero and actually lost several of his friends. And so I think that a lot of that still, he carried with him to this day,”

Last Thursday Shirreffs took his own life -- an event Brooks says no one saw coming.

“It'd been a week or two since we had texted I did after going back I did see some things on his Facebook that were kind of shocking things that you know, normally was just I just thought it would been his humor, but now looking back, I think that was his way of kind of lashing out at whatever was he was dealing with or whatever he was fighting,” Brooks said.

Brooks says Shirreffs is one of many in his community who have dealt with issues they don’t know how to cope with on their own.

“It's just not something that we're thought where we just don't think we're allowed to do that we're not allowed to be upset, you know, we just have to, we have to stay strong for everybody else,” said Brooks.

“Post traumatic stress disorder is something that we have to be aware of in our community, not just for military veterans, not just for people currently in the military, but for first responders,” said Burks

According to the U.S. Fire Administration, firefighters and law enforcement are more likely to die by suicide than on the job.

Having dealt with these stresses first hand, Brooks says the help is not always easy to access.

“When I was going through my own issues, that was something that I found was that it was it's very limited. There's very, very limited, you know, to get mental health, a lot of times, there is a 90 day waiting period." Brooks said. "Well, if you're in crisis, you know, you're you're only option is to go to the hospital at that point. And again, we talked about stigmas. That's not something, you're afraid that you're going to lose your job, you're afraid you're going to lose your licensing, because you go get that or try to get that help,”

Brooks says he wants to use this tragedy to push for changes, and make sure his friend does not die in vain.

“His son Mikey, and I've talked about it, we're going to meet next week about, you know, where do we go from here? And what do we do? I mean, is it writing letters to our, our legislature trying to get more funding for these types of activities? Is it protections that need to be in place to preserve their jobs? You know, when when you do reach out, have a have a problem?," said Brooks. " And, you know, I don't know what the answer is yet, but we're gonna we're going to start working towards,”

Brooks says the most important thing is to talk to someone if you are having mental health problems, and to look for signs in your loved ones.

“I'm so thankful that that a friend of mine stepped in and helped me. You know, my wife noticed the signs and she reached out to him because he was a fellow firefighter and they had the wherewithal to step in and interject.”

If you or a loved one are in crisis, there are multiple places to receive help. Beginning with these hotlines: