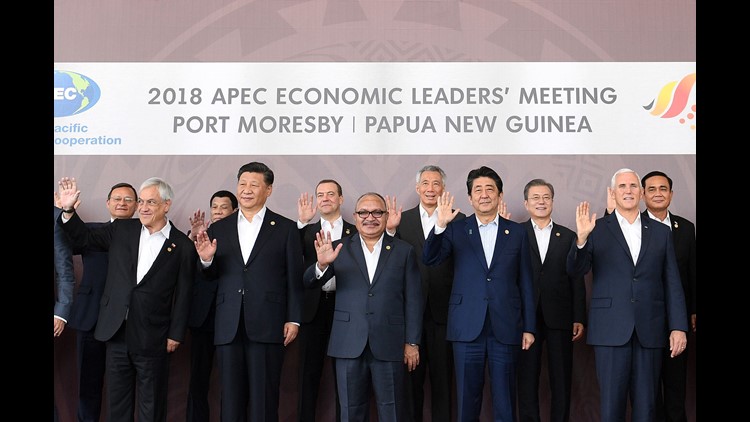 World leaders meeting for Asia-Pacific trade talks in Papua New Guinea wrapped up a divisive, two-day summit Sunday after failing to agree on a group statement amid a widening rift in U.S.-China relations.

Papua New Guinea Prime Minister Peter O’Neill said he will release a "chairman's statement" in the next few days on behalf of the 21-nation gathering. O'Neill acknowledged that "the entire world is worried" about tensions between the two superpowers.

The struggle to find common ground did not bode well for a crucial meeting between President Donald Trump and Chinese President Xi Jinping scheduled for the G-20 meeting in Argentina at month's end.

O'Neill said the talks broke down over language about the World Trade Organization. The U.S. has adamantly opposed the way WTO treats China as a market-driven economy rather than one dominated by state-supported industries.

More: Pence expected to take tough line on China as he heads to Asia

The same, sharp differences that have crippled trade between the two nations also made working out common language for a communique impossible, O'Neill concluded.

"There were two big giants in the room, what can I say," O'Neill said.

In his speech to the group, Xi urged the business and political leaders to promote free trade.

"The world today is going through major development, transformation and change," Xi told the group. "While economic globalization surges forward, global growth is shadowed by protectionism and unilateralism."

Pence pitched that the United States offered nations in the region a better option for economic partnership and criticized Chinese “authoritarianism and aggression.” He said the U.S. seeks "collaboration and not control" and blasted a Chinese road-building program as forcing debt on poorer neighbors.

“We don't drown our partners in a sea of debt, we don't coerce or compromise your independence," Pence said. "The United States deals openly and fairly. We do not offer a constricting belt or a one-way road.”

“The assistance provided by China has been warmly welcomed by our partners in this region and beyond,” responded Wang Xiaolong, a foreign ministry official.

After the summit, Pence tweeted that "The United States’ commitment to the Indo-Pacific has never been stronger – and while we will always advance our interests, we will also respect your own."

The Trump administration has slapped tariffs on $250 billion in Chinese goods. The administration also has warned that duties on another $267 billion in goods could be coming, which would subject to tariff virtually all Chinese-made products shipped into the U.S.

"The entire world is worried about the debate about trade relations between China and, of course, the United States," O'Neill said. "This is a situation that both countries need to sit down and resolve. And I believe that the G20 meeting that is going to be held very shortly will be an opportune time."