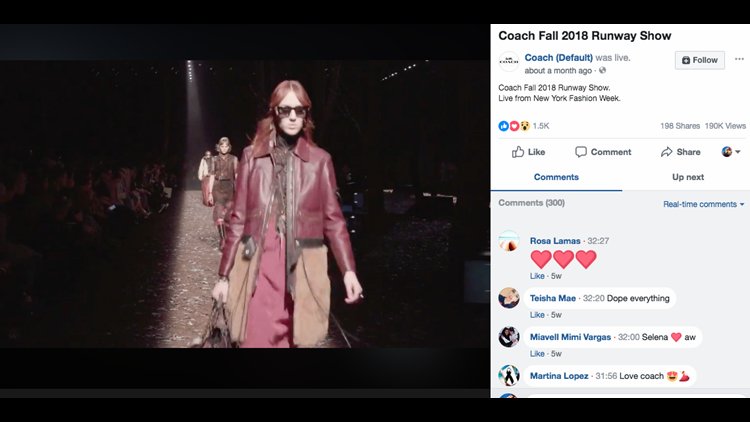 Photo by: Tapestry
Coach streamed its February show during New York Fashion Week on Facebook Live and Instagram, then enabled viewers to go right to Coach.com to purchase its Dreamer handbag, available for a limited time.

When entrepreneur Brian Lim was thinking through different ways to market his apparel company, he knew traditional advertising wouldn’t fly.

Lim's Anaheim, Calif.-based iHeartRaves provides festival fashion apparel — creative and stylish clothing popular among Millennials attending concerts and entertainment venues. To reach his target audience, the founder and CEO wanted a more authentic approach. So Lim enlisted the services of so called micro-influencers — people with a small to midsized followings online — to raise awareness about his company.

IHeartRaves scoured social media and cultivated relationships with popular digital personalities who were fans of the company’s clothing.  Whenever the company launches a new line, iHeartRaves ensures that those micro-influencers have products so they can blog or post about the clothing on launch day. The tactic has proven successful: A recent launch campaign earned the company $20,000 in revenue as a direct result of working with micro-influencers, Lim says.

An influencer can be a blogger, a YouTube video star or someone who posts regularly on social media. Some, such as celebrities, boast hundreds of thousands or even millions of followers. While it’s not unusual for companies with big marketing budgets to turn to celebrities to hawk their products online, many smaller businesses are finding that micro-influencers — those with less of a reach — are proving to be more effective at drumming up sales.

How big is micro?

It’s that engagement that makes micro-influencers so effective. Since micro-influencers have fewer people to interact with, they are better able to develop stronger relationships with their audience. A 2016 study by influencer marketing company Markerly found that the more Instagram followers an influencer has, the less engagement there is on their posts. “Kim Kardashian's not going to respond to everybody that puts something up on her (social media) profile,” Barker says.

Rave micro influencer Gabby Parsons shared this photo of she and boyfriend Jason Underwood (also an influencer in the rave community) to Instagram of them wearing gear from Anaheim, California apparel company iHeartRaves.
Gabby Parsons

A 2016 survey by influencer marketing research company Collective Bias found that 60% of respondents had considered recommendations by a blogger or social media post before making a purchase.  The same study found that 30% of consumers were more likely to buy a product endorsed online by a non-celebrity than a celebrity. Among Millennials, 70% preferred a non-celebrity endorsement.

A small price to pay?

Cost is one of the biggest benefits, says Kali Ventresca, who founded the Glen Cove, N.Y.-based custom lingerie company Impish Lee with her sister Noelle in 2015. “We felt that using micro-influencers was the best way to get our product in front of the most people as quickly as possible, while staying within our budget,” Ventresca says. A recent collaboration with blogger Corissa Enneking of the FatGirlFlow blog expanded their presence in the plus-size community, and the company doubled its sales from the previous month. Even when they do regular photo shoots, they consider the followings of the models they use. "Models with nice followings can act as micro-influencers," she says. "They share photos from the collection or use them in their portfolio."

Some businesses give the micro-influencer a product or discounts as payment. Danielle Hannah, owner of Mantra Magnets, a San Diego-based small business that sells jewelry designed to promote relaxation, gives micro-influencers samples of her product in exchange for writing a blog post. “They tweet it out and share that on their social sites and their blog,” Hannah says. During a three-month period working with six micro-influencers, the company’s average monthly revenue tripled.

Other possible payment arrangements include a percentage for every sale that comes through the micro-influencer and a set fee for an action such as writing a blog post or posting to Instagram. Many small businesses are finding long-term relationships with micro-influencers to be most effective because “you've got to get in front of people five to six or seven times for them to purchase something,” Barker says.

Small businesses find micro-influencers in a number of ways. There are agencies that have built businesses around connecting brands with micro-influencers, but many small-business owners find them by spending time on social media looking for people who would appeal to your customer base and who regularly interact with their online following. Micro-influencers who truly like a brand are key, Barker says. A yoga mat manufacturer, for example, might reach out to a yoga teacher who has a popular blog or an engaged Instagram following.

That’s how Ada Rojas, a New York-based fashion and lifestyle blogger got into the micro-influencing game. Rojas was caught off-guard when “brands started reaching out to me and offering to pay me to do blog posts and videos,” she says. Eventually, she turned her blog and digital presence into a full-time job, serving as a brand ambassador for such companies as coffee maker Café Bustelo.

Photographer John Philp Thompson  had a similar experience when he started posting his photography work on Instagram. As his online following grew, so did his clout, and he has scored collaborations with brands such as Grey Goose, Nike and ASICS. “I view it as having a friend who is super adventurous and telling you what they're up to all the time,” he says.

The future is bright for micro-influencers as more businesses incorporate influencer marketing into their budgets, says Natalie Silverstein, vice president of brand, marketing and culture at Collectively, an agency that connects brands with influencers. “We really see it as deeply embedded in the broader strategy of any brand who is forward-thinking right now.”