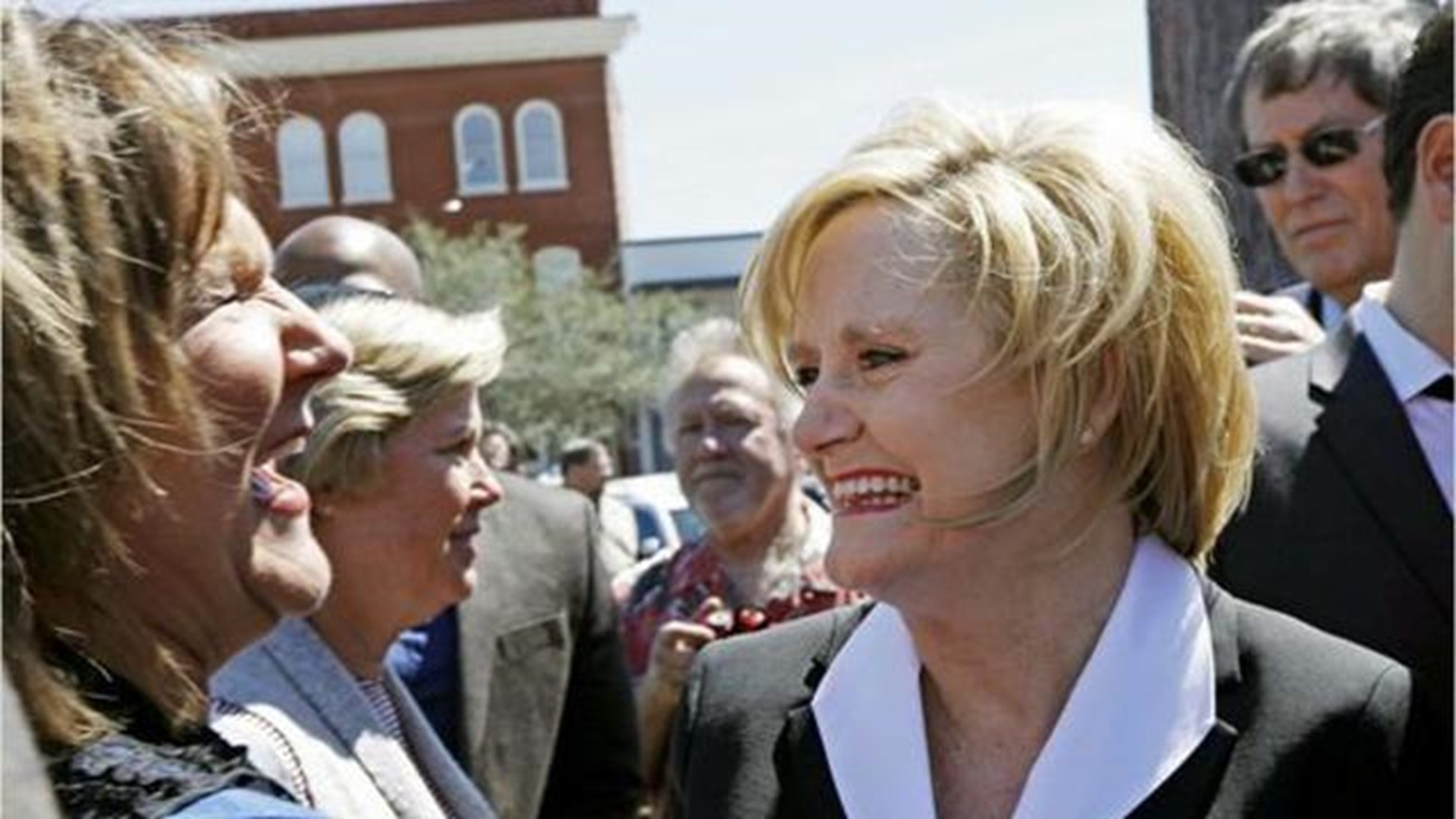 JACKSON, Miss. — State Agriculture Commissioner Cindy Hyde-Smith in April will become the first woman to represent Mississippi in the U.S. Senate, Gov. Phil Bryant announced at an event in her hometown of Brookhaven on Wednesday.

Numerous state GOP leaders voiced support, but her appointment is already drawing concern from other in-state Republicans and the White House over whether the former Democratic lawmaker has conservative bona fides.

"We will always owe Sen. (Thad) Cochran our gratitude and our appreciation ... well done, my true and faithful servant," Bryant said in announcing his choice to replace the retiring senator. "Now we turn to the future ... (Hyde-Smith) has the intestinal fortitude to make things happen, (she) can stand and make difficult decisions."

Hyde-Smith told a crowd gathered for the announcement, "I pledge to you to every day seek his face and fight for the things that matter to me and matter to you. I am stronger today than I think I have ever been. I feel that power of prayer and that armor around me. I know we have tough days ahead."

Sources close to the governor said Wednesday that Bryant has spoken only to a "low-level political adviser" in the White House who expressed concern about Hyde-Smith's appointment and not to Trump directly.

This fits with a Politico story Wednesday, citing two White House aides who said Trump administration officials told Bryant by phone Tuesday that her history as a Democrat worried them. The Politico story also said White House officials said President Trump would neither campaign for nor endorse her.

The sources close to the governor, however, said Bryant feels confident he will be able to secure Trump's support and endorsement for Hyde-Smith once he has a chance to speak directly to the president, whom he considers a friend and ally.

Bryant would not answer questions about Trump on Wednesday but has said he expects support from the president for his appointee. He complimented Hyde-Smith's "toughness" and said he is confident in her conservatism and has "never seen her waver."

Hyde-Smith was particular in outlining her ideology, saying "I've been a conservative all my life." She hit on numerous red-meat issues, including cutting taxes, securing borders, reducing regulations, being anti-abortion and pro-Second Amendment rights. She said she is proud of her record in the state Legislature and stands by it.

"The good thing about serving in the Legislature is there's a long paper trail," Hyde-Smith said. "They record every vote. I have a record of conservatism and getting things done for you and that's exactly what I'll do in the U.S. Senate."

She told the crowd of her daughter, Anna-Michael, shooting a buck deer with her 7MM-08 when she was only 11.

Hyde-Smith replaces Cochran, the longtime, powerful chairman of the Senate Appropriations Committee, who's stepping down before his seventh term ends in 2020. The Nov. 6 special election to permanently fill his seat is expected to be one of the most important mid-term elections in the country as the GOP tries to maintain its slim majority in the Senate.

1 / 16
Rogelio V. Solis, AP
Mississippi Gov. Phil Bryant, congratulates state Agriculture Commissioner Cindy Hyde-Smith after appointing her to succeed fellow Republican Thad Cochran in the U.S. Senate, Wednesday, March 21, 2018, in Hyde-Smith's hometown of Brookhaven, Miss. Cochran, who is 80, is stepping down April 1 because of poor health. Hyde-Smith would be the first woman to represent Mississippi in Congress. She will immediately begin campaigning for a Nov. 6 nonpartisan special election to fill the rest of Cochran's term, which expires in January 2020. (AP Photo/Rogelio V. Solis)

Republican state Sen. Chris McDaniel of Ellisville, who is running for the same seat after nearly defeating Cochran in 2014 with a tea party-fueled campaign, released an open letter to Trump on Wednesday morning. The letter, signed by more than 100 of his Republican supporters, called on the president to "not lend your name to a candidate that is likely to lose," saying her past as a Democrat could set up scenarios similar to upset GOP losses in Alabama and Pennsylvania.

After her appointment was announced, McDaniel himself heavily criticized Hyde-Smith in what is certainly a preview of his campaign messaging going forward.

In addition to McDaniel, Hyde-Smith will face Democratic former U.S. Rep. Mike Espy, who served as agriculture secretary in the Clinton administration. Mississippi special elections are not partisan, meaning all candidates run in a general election setting. If no one wins more than 50 percent of the vote, a runoff will be held three weeks later.

Bryant is calling for state Republicans to unite behind Hyde-Smith, but some state GOP leaders have expressed concern over the choice of Hyde-Smith, who served for years in the state Senate as a Democrat, before switching parties in 2010 shortly before her first run for agriculture commissioner.

One potential concern is that Hyde-Smith voted in the Democratic primary for president and other races in 2008, Lincoln County records show.

But supporters say Hyde-Smith's legislative record as a Democrat was conservative and that she frequently voted with Republicans on major issues. She has been a state GOP leader since she was first elected ag commissioner in 2011.

Credit: Rogelio V. Solis, AP
Mississippi Agriculture Commissioner Cindy Hyde-Smith points out her mother in the audience Wednesday in her hometown of Brookhaven moments after Gov. Phil Bryant selected her to succeed fellow Republican Thad Cochran in the U.S. Senate. Cochran, who is 80, is stepping down April 1 because of poor health. Hyde-Smith will be the first woman to represent Mississippi in Congress. She will immediately begin campaigning for a Nov. 6 nonpartisan special election to fill the rest of Cochran's term, which expires in January 2020. Attending the ceremony was her husband, Mike Smith, left, and her daughter, Anna-Michael Smith, second from left.

Hyde-Smith's legislative "report cards" from the state Business and Industry Political Education Committee — for years considered a litmus test for Mississippi Republicans' voting records — have carried grades as high as many Republicans and she was repeatedly deemed a "Business and Jobs Champion" with her votes. McDaniel, who often votes against the state GOP leadership and business interests, has a "D" grade with BIPEC, but had also been a business champion for nine previous years.

Hyde-Smith is a lifetime NRA member who received an "A" grade when she ran for agriculture commissioner and has a "100 percent pro-life" record on abortion issues.

Hyde-Smith in the state Senate voted with Republicans on abortion restrictions, lawsuit or "tort" reform and large budget cuts after the Great Recession. She, McDaniel and others joined together in a fight for property rights against eminent domain that pitted them against both establishment Republicans and Democrats in 2009.

Former U.S. Senate Majority Leader Trent Lott praised Bryant's choice and said he has no qualms about Hyde-Smith's conservatism or ability to fend off attacks from the right or left campaigning.

"I know they'll attack her, but I know Cindy and if they're not careful they will draw back a nub," Lott said. "She can handle it. She's a Mississippi woman, and there's no tougher creature on planet Earth."

Cindy Hyde-Smith through the years: Gallery