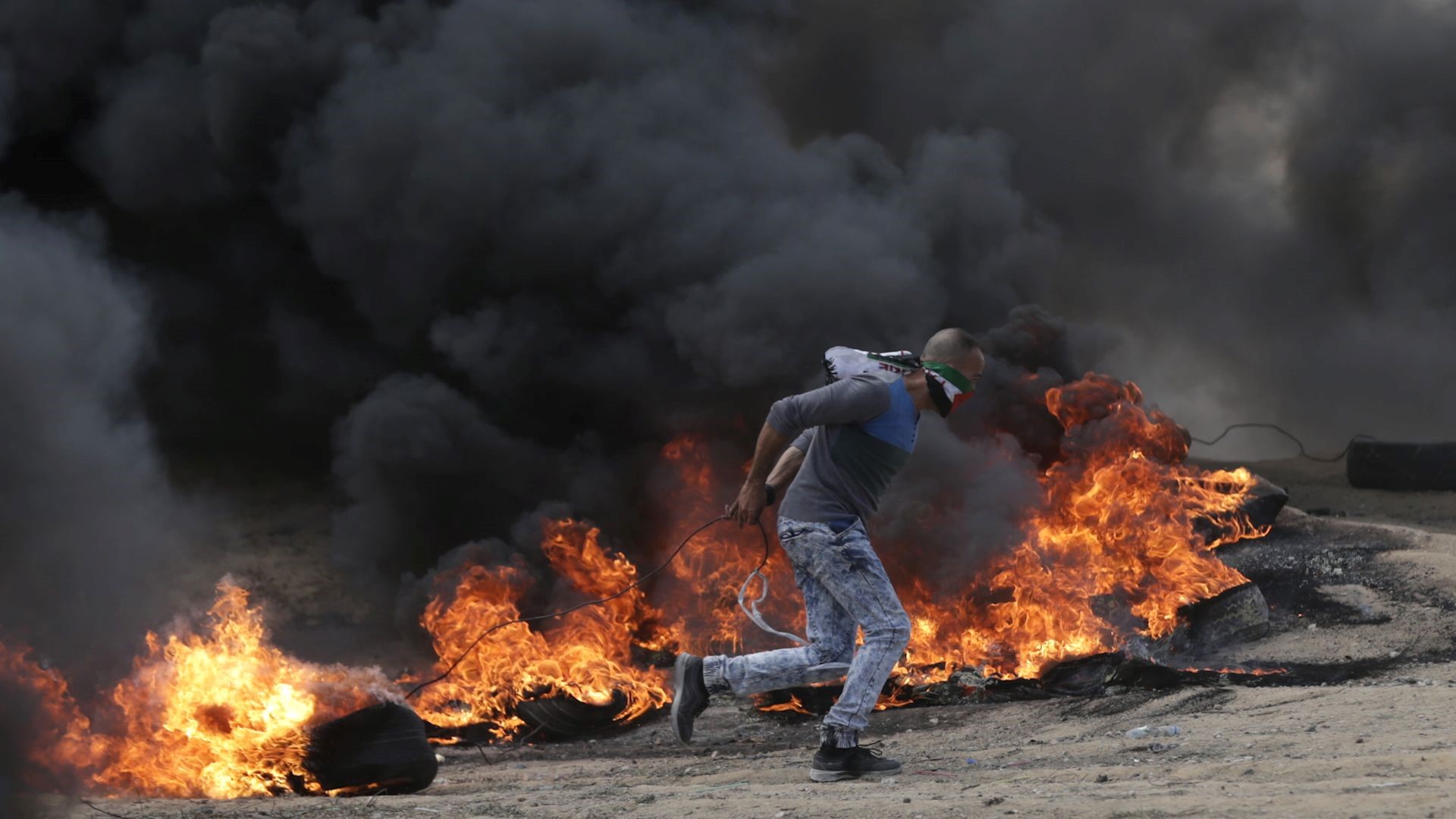 JERUSALEM – More than 50 Palestinians were killed Monday in mass protests along the border with Gaza while Israel celebrated the U.S. Embassy's contentious move to Jerusalem from Tel Aviv.

The demonstrations have gone on for weeks and reached a violent apex as Israel marked 70 years since the Jewish nation was established. Palestinians annually mark their resulting displacement on Nakba Day, or the Day of Catastrophe, on May 15.

The Gaza Health Ministry said 55 Palestinians were killed and more than 1,200 wounded Monday in border clashes with the Israeli military, making it the deadliest day of violence with Gaza since 2014.

“This disproportionate and illegal use of lethal force against unarmed civilian protesters is criminal," the Palestinian Foreign Ministry said in a statement.

Lt. Col. Jonathan Conricus, an Israeli military spokesman, blamed Gaza's Hamas leadership, saying the Islamic militant group encouraged Palestinians to breach the border fence. He said several such efforts had been repelled, and the military was committed to ensuring that communities on the Israeli side were not overrun.

White House spokesman Raj Shah blamed Hamas for the deaths, saying the group was "cynically provoking" the Israeli response. He said Israel has the right to defend itself and called Monday “a great day for Israel and the United States.”

More: U.S. Embassy to open in Jerusalem amid Palestinian outcry

More: The U.S. Embassy isn't the only reason for violence: Here are key issues

Palestinian President Mahmoud Abbas, who condemned the embassy as an "American settlement outpost," called for three days of mourning. British Prime Minister Theresa May was among Western leaders calling for "calm and restraint" on both sides.

The embassy move to Jerusalem outraged Palestinians who long hoped to create a capital for themselves in the city's eastern sector. Israeli and U.S. officials were determined not to let the violence diminish the embassy celebration.

"Israel is a sovereign nation with the right like every other sovereign nation to determine its own capital," President Trump said in a taped message played at the dedication ceremony. "For many years, we failed to acknowledge the obvious."

Jared Kushner, son-in-law and adviser to Trump, and the president's daughter Ivanka were part of the U.S. delegation attending. Kushner, whose grandparents survived the Holocaust, drew a standing ovation when he mentioned Trump's announcement last week that the United States would withdraw from the nuclear agreement with Iran, Israel's sworn enemy.

"The United States stands with Israel because we believe, we know, that it is the right thing to do," he said.

David Friedman, the U.S. ambassador to Israel, presided over the dedication ceremony and said the embassy move keeps a "promise we made to the American people."

"Within the confines of Jerusalem, every man, woman and child becomes part of something more than themselves," Friedman said. "Shalom, peace, is the inseparable sister of truth"

Near the ceremony, more than 500 demonstrators clashed with Israeli forces, and police made at least one arrest. Demonstrators chanted, "Jerusalem is ours!"

Safa Yasin, 19, a Palestinian citizen of Israel, said the embassy move "cements Israeli control over Jerusalem" and shows disregard for the rights of the Palestinian people.

"We stand in solidarity with all Palestinians," he said. "The ones in Gaza right now especially."

Dozens of Palestinians killed in protests of U.S. Embassy in Jerusalem

1 / 22
LUCA PIERGIOVANNI, EPA-EFE
epaselect epa06735601 A Palestinian demonstrator throws a stone during a protest against the US Embassy move to Jerusalem and ahead of the 70th anniversary of Nakba, at the Gaza-Israeli border, in Abu Safia, Gaza Strip, 14 May 2018. Palestinians are marking the Nakba Day, or the day of the disaster, when more than 700 thousand Palestinians were forcefully expelled from their villages during the war that led to the creation of the state of Israel on 15 May 1948. Protesters call for the right of Palestinians to return to their homeland. EPA-EFE/LUCA PIERGIOVANNI ORG XMIT: GRAF7146

Some Israelis came out in support of the embassy. Among the supporters, who were separated by a police barrier from protesters, was Elisha Haas, 74, an Israeli professor of biophysics at Bar Ilan University.

“I came here to say thank you to President Trump," Haas said, adding that he has no sympathy for the Palestinians shot along the border. “I don’t care how many are killed because they are using these protests to terrorize Israel. The despair of Gaza is fake news."

Practically speaking, little was changed by Monday's formal move. The U.S. consular compound in the southern Jerusalem neighborhood of Arnona will become the temporary embassy, and Friedman and a small staff will move to the site.

Most of the 850 embassy workers in Tel Aviv will not move until a new embassy is built, which could take a decade.

Still, the symbolism is not lost on the Palestinians. In the West Bank, several thousand people gathered in the center of Ramallah, while hundreds marched to the Qalandiya crossing on the outskirts of Jerusalem, where protesters threw stones at Israeli troops.

The worst violence has been along the Gaza border, less than 50 miles from Jerusalem. Since weekly Great March of Return rallies began in March, more than 100 Palestinian protesters have been killed and more than 2,300 wounded.

The Great March represents the Palestinians' demand for the right to return to areas they fled or were driven from during the creation of Israel in 1948.

"We are adamant to return, no matter what happens," Ahmad Abu Artema, spokesperson for the Great March, told Al Jazeera. "This is what the people of Gaza want. It's about popular will. And this is their right."

1 / 20
LIOR MIZRAHI/GETTY IMAGES
An Israeli man argues with a Palestinian woman before a flags march outside Damascus Gate on May 13, 2018 in Jerusalem, Israel, one day before US will move the Embassy to Jerusalem.