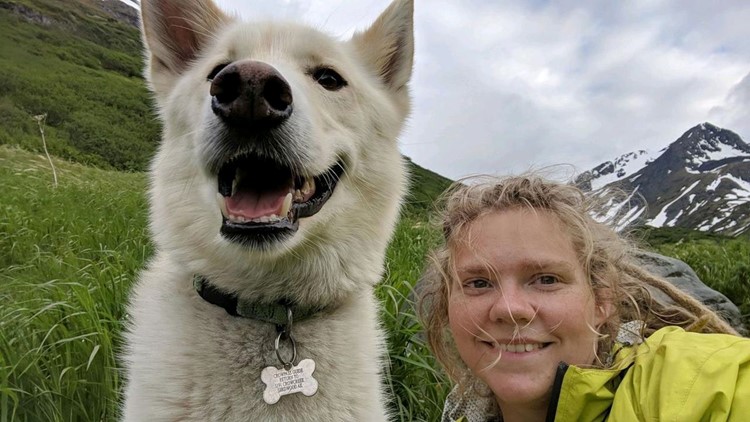 Photo by: Amelia Milling
A selfie of Nanook and Amelia, used with permission of the Anchorage Daily News.

ROCHESTER, N.Y. — Her mother was home in Chattanooga, Tennessee, watching on her computer screen late Wednesday night as a GPS tracker beamed a cluster of little dots showing that 21-year-old Amelia Milling could be in a cold river near Anchorage, Alaska.

“The feeling was sheer terror,” Sharon Milling recalled Saturday. “I did not know if she had fallen and broken something and couldn’t get out of the water.”

Amelia Milling was on the bank of the Eagle River, huddled in a sleeping bag as a husky that had arrived out of nowhere after Milling fell the day before insistently licked her face.

Sharon Milling learned all that a few hours later in a video call, after Amelia had hit the SOS on her satellite messenger and a helicopter crew took her to safety.

“As dramas go, it was about 2 ½ hours,” her mother said of the time she spent staring at the computer. “It wasn’t that long. It felt like an eternity.”

The tracker had sent Sharon Milling a message about the emergency, and she was able to contact rescuers in Alaska. She told them her daughter, who is entering her fourth year as a visual media major at Rochester Institute of Technology, is deaf so they’d know how to communicate with her.

“She’s adventurous, she’s fearless,” Milling said of Amelia. “She doesn’t let her deafness slow her down, nor should she.”

Her mother said Amelia has been a serious hiker for about five years. Last summer she went car camping in national parks in the West. Before heading to meet a friend in Anchorage in early June, Amelia and her father spent a few days on the Appalachian Trail.

Amelia Milling, a student at RIT, getting ready to hike a section of the Appalachian Trail. She hiked in Alaska in early June, and encountered a Husky dog that helped rescue her on a river crossing.
Provided by Sharon Milling

Sharon Milling admitted she was apprehensive about the Alaska trip, and she insisted Amelia have a device that could send text or emergency messages.

Amelia had planned a three-day solo hike starting June 18. The second day, she slid down a slope, hit a rock and went airborne.

"I'm a Southerner, so I wasn't thinking about snow," Milling, who is deaf, told the Anchorage Daily News via an interpreter Thursday.

She landed without apparent serious injury. Regaining her wits, she saw she suddenly had company.

A husky was by her side. Amelia Milling saw a tag that said Crow Creek guide dog, with the name and phone number of the owner. Milling later learned the dog frequents the area and escorts hikers. Nanook guided her back to the trail, and eventually Milling set up camp for the night. She woke up to find Nanook still there.

“Personally, I believe God placed him there to protect her,” Sharon Milling said. The Millings have one dog and are dog-sitting Amelia’s service animal, Ava, this summer.

Amelia Milling, a visual media student at RIT, headed to Alaska in early June. On a three-day solo hike, she encountered a Husky that helped her through mishaps that could have been catastrophic.
Provided by Sharon Milling

Nanook proved his guardian powers later Wednesday when Milling tried to ford the river. As she told her mother, she struggled at one area known for its crossing and watched Nanook cross. By the time she was ready after rearranging her pack to keep things dry, the current seemed swifter and stronger. She went to another spot, but the footing was more precarious and she fell in.

Nanook helped her get to the bank, where she tossed her pack and climbed out. She put on dry clothes and got into her sleeping bag.

That’s when Nanook started to lick her.

“Not 'I want to play with you,' but just would not leave her alone,” Milling said her daughter told her. “She thought she was going to lie there until she recovered and then she would sit up and kind of gauge where she was at. She just wasn’t recovering. The dog kept licking her.”

She told her mother that after she hit the SOS button, Nanook went and laid down.

More: Service dog delivers 8 puppies at Florida airport while waiting for a flight

Sharon Milling stayed in contact with rescuers, who told her they had found Amelia and despite being cold and wet, she was fine.

She saw her daughter on a video call at about 2 a.m. EDT Thursday.

“The fact that she thought through things and addressed them well without letting panic take over … I was very proud of her,” Sharon Milling said.

“I have to keep in it in the back of my head, she’s probably going to do this again. I hope this will be the last rescue scenario we have to go through. … I suppose this is not her last solo hike ever. She will not let this put her on the couch. That’s not who she is.”

On Thursday, Nanook's owner Scott Swift told the Anchorage Daily News that the dog frequently embarks on treks on his own and will accompany hikers on their journeys.

"He's been doing it for years now," Swift said.

On Thursday, Amelia Milling told the Daily News that she'd like to finish her hike, but perhaps with more company.