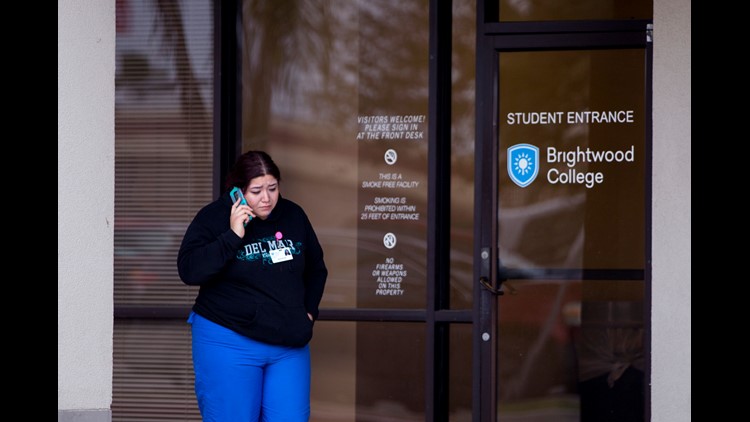 Photo by: Rachel Denny Clow/Caller-Times
Alexis Gurrola, a dental assisting student at Brightwood College, said she was told Wednesday, December 5, 2018 that the college was closing. She said students and staff were told they would finish out the week, but that classes would not resume next week.

Why Brightwood College, Virginia College are closing — and what students should do

Instead, the 30-year-old mother of three is one of thousands of students who were told this week that their colleges are closing abruptly.

"We are hurt, disappointed," she said. "And this isn’t my first time going through this. I went through this with ITT Tech," a for-profit college that closed 130 campuses in 2016.

The announcement this week that more than 70 campuses operated by Education Corporation of America are closing — including all its Brightwood College and Virginia College locations — seemed abrupt to the thousands of students who attend. They wondered what credit they will receive for their coursework and whether they will get tuition refunds.

But plenty of warning signs showed the schools were on shaky ground.

Here are the factors that led to the largest closure of for-profit institutions since ITT Tech in 2016 — and information for students who are wondering what's next:

The company based in Birmingham, Alabama, has been around since 1999, when it purchased Virginia College in Roanoke.

More campuses opened over the next few years along with Culinard, a culinary school. Online classes were added later, as well as branches in several states. In 2006, the company added another chain of schools to its portfolio, the San Diego Golf Academy.

ECA specializes in career programs for older students or those going back to school. The schools offer programs in cosmetology, massage, culinary arts, information technology and health, among others.

The company appeared to be on the upswing as recently as 2015, when it acquired 38 colleges operated by the for-profit Kaplan College Campuses. Stu Reed, ECA's chief executive officer, described the acquisition as an exciting opportunity that would be a great fit.

The 2015 sale came when the for-profit industry was struggling after more federal regulation and scrutiny. The Obama administration took a tougher stance on for-profit career schools, cracking down on colleges where students took out huge loans and struggled to find jobs with the new degrees.

By 2018, however, ECA had failed to turn itself around. In a 2018 federal court filing, company officials disclosed "enrollment in many of ECA's campuses has been falling for several years."

They blamed the decline on the U.S. Department of Education's decision in 2016 to remove federal recognition of the school's accreditor, the Accrediting Council for Independent Colleges and Schools.

That group, the nation's largest accreditor of for-profit schools, wasn't an effective watchdog for student finances and taxpayers' money, the government contended.

More: This little-known tactic can save you thousands on student loans

More: Paying off student loan? Repayment options you should consider

Accreditors certify a school meets certain standards to provide an adequate education that prepares students for careers and life after college.

Without federal recognition, colleges like ECA would have to find a new accreditor — or face being cut off from federal student loans.

ECA officials said they had to tell current and prospective students about the uncertainty surrounding the school's accreditor, which caused some to transfer to other schools or not enroll at all.

Enrollment fell, which had a big effect on the company's bottom line.

Like many private, for-profit schools, Education Corporation of America gets the bulk of its money from tuition and fees. When enrollment plummets, so does revenue.

In September, the company announced plans to close 26 campuses — roughly a third of its current total — by early 2020.

The Golf Academy of America school in Chandler abruptly shut its doors on Election Day in November, the same day poll workers were supposed to use the school site as a voting location.

Due to the failure to pay rent the landlord changed the locks on the door preventing access to the Gila polling place in Chandler.
Cheryl Evans/The Republic

Students at the academy had worked toward associate or bachelor's degrees that would prepare them to work in various phases of the golf industry, the school's website said. Graduates could manage a golf course or be a golf pro, potential students were told.

ECA had reported nearly $50 million in debt to unsecured creditors in October, prompting officials to seek legal remedies before landlords evicted schools from their leased space.

Company officials were trying to restructure their finances, something that often happens in bankruptcy. They filed a lawsuit against the U.S. Department of Education with the goal of continuing to access federal student-loan money during the restructuring phase. But a judge denied that request in November.

The final blow: 'Seriously concerned about the educational outcomes'

Another blow came a few days ago. The ECA's accreditor announced it was suspending accreditation with the intent to withdraw it. Schools need accreditation to continue to be part of the federal student-loan program.

Michelle Edwards, president of the Accrediting Council for Independent Colleges and Schools, said in a letter to the company the council had "grave concerns" about the college's ability to continue operating given its "rapidly deteriorating financial conditions."

The council is "seriously concerned about the educational outcomes" of the 15,000 students who are enrolled, the letter said. She directed college officials to make arrangements to ensure students can finish their programs of study "at the institution or at another acceptable institution," the letter said.

Company officials did not respond to requests for comment Thursday from USA TODAY.

Reed, the company's CEO, said in a letter to students this week that recent developments and the suspension of accreditation forced the company to close schools.

"Unfortunately, this means that your enrollment will be canceled and there will not be future classes at the campus in which you enrolled or any Education Corporation of America campuses," Reed wrote.

Students at Brightwood College were told Wednesday, December 5, 2018 that the college was closing. Students were told they would finish out the week, but that classes would not resume next week, according to dental assisting student Alexis Gurrola.
Rachel Denny Clow/Caller-Times

In Indianapolis, the closure announcement came as a surprise to school staff, said Chris Hull, the school's admissions representative.

The college had just hired two new staffers and was preparing to start a nursing class next week when company officials announced Wednesday that the college would close after the end of the term, which is Friday.

Hull worries students won’t continue their education, especially ones who have been through other closures.

“We tell them, ‘You have gotten on the road, this is a detour, this is a stop sign. Don’t let this stop you from moving in a new direction.’”

Rebecca DeVos, the college's dean, said she was aware of issues at other schools, but she thought the Indianapolis campus was solid.

What recourse do students have?

Credits not accepted by all schools

One challenge with transferring to another school: Other institutions may not accept ECA credits.

That's sometimes a problem for schools who, like ECA, were accredited by a national accreditor.

Regional accreditors, such as the Higher Learning Commission, are considered the highest level — the "gold standard" of accreditation — because their credits are more widely accepted.

ECA has a webpage for students. The company says it will be updated on Dec. 17 with information for students on how to get their transcripts from schools and recommendation on where their credits will transfer.

Jackson, the Indianapolis nursing student, isn't planning to transfer schools a third time. She's unsure whether her credits will even transfer if she tried.

"I have kids, and my kids are older, so I put them through a lot and sacrificed to come here," she said.

More: How some students are lowering or avoiding college tuition and student loans