A dramatic shift in many states to absentee ballots is intended to protect voters from spreading the virus at polling places but is also making more work. 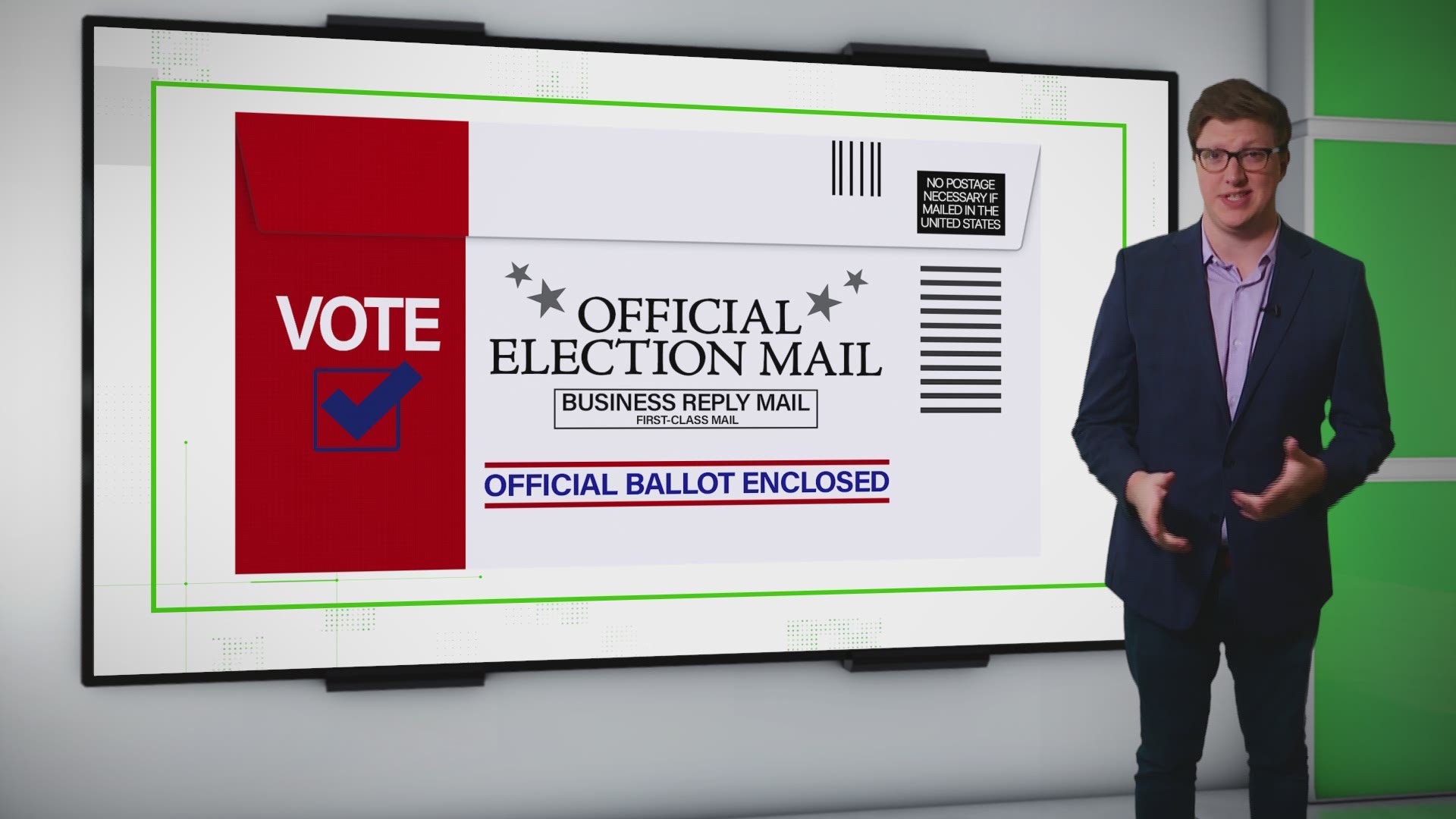 WASHINGTON — The U.S. Postal Service's famous motto — "Neither snow nor rain nor heat nor gloom of night stays these couriers” — is being tested like never before, by challenges that go well beyond the weather.

Its finances have been devastated by the coronavirus. The Trump administration may attach big strings to federal bailouts.

The agency’s responsibilities, meanwhile, are mounting. A dramatic shift in many states to voting by mail is intended to protect voters from spreading the virus at polling places. But it’s also making more work for post offices and contributing to delays in determining election winners.

Results were delayed this week in Kentucky and New York as both states were overwhelmed by huge increases in mail ballots. Both states are now giving voters extra time after Election Day to return mail ballots, as long as they were postmarked by Tuesday.

“What we don’t need is more chaos in the chaos,” said Wendy Fields, executive director of the voting rights advocacy group The Democracy Initiative, who said worries about undue strain at the post office only exacerbate larger struggles against voter suppression.

RELATED: VERIFY: Your mail-in ballot will be sent regardless if it has a stamp or not

President Donald Trump opposes expanding voting by mail, arguing that it will trigger fraud, even though there's no evidence that will happen. Trump and many of his administration's leading voices frequently vote absentee themselves.

The president has also called the Postal Service “a joke” and says that package shipping rates should be at least four times higher for heavy users like Amazon. But shipping and packages are actually a top revenue generator for the Postal Service, and critics say Trump is merely looking to punish Amazon founder and CEO Jeff Bezos in retaliation for unflattering coverage in The Washington Post, which the billionaire also owns.

Trump has acknowledged that larger political calculations are at work, tweeting that expanding vote by mail will “LEAD TO THE END OF OUR GREAT REPUBLICAN PARTY.” Democratic presidential nominee Joe Biden has suggested that the president's opposition to absentee voting and criticism of the Postal Service may help him “steal” the election.

Mark Dimondstein, president of the American Postal Workers Union, which represents 200,000-plus employees, said the Trump administration is “shamefully trying to use the crisis to carry out an agenda" of privatization, which would ultimately "break up the Postal Service and sell it.”

“Mid-election year is not the time to see changes in the dependability of the Postal Service, especially during a year when our country is experiencing a pandemic and health crisis, which will dramatically increase the necessity of voting by mail," he said.

The Postal Service predates the United States, created by the Second Continental Congress in July 1775. Benjamin Franklin was the first postmaster general.

Unlike its private competitors, the Postal Service cannot refuse to make costly deliveries to especially hard-to-reach addresses. Still, much of its budgetary concerns stem from a 2006 law requiring the agency to fully fund retiree health benefits for the next 75 years.

It normally operates without taxpayer funds. Amid the pandemic, however, the Postal Service lost $4.5 billion in fiscal year 2020's second quarter. Congress approved a $10 billion line of credit for the agency as part of March's sweeping economic rescue package. Since then, though, the Postal Service and the Treasury Department have had discussions about requirements to actually extend those loans.

Neither side will say publicly what's being negotiated, but Trump has made his feelings clear. A 2018 Treasury Department task force also recommended the Postal Service increase package rates and cut labor costs. A second coronavirus aid package passed in May by the Democratic-controlled House includes $25 billion in direct aid for the Postal Service, but the GOP-majority Senate hasn't passed its own version.

In the meantime, more than 3,420 of the Postal Service's 630,00-plus employees have tested positive for COVID-19, and some have died. While package deliveries have increased as Americans stay home, mail volumes plummeted — as much as 30%, according to the American Postal Workers Union.

In April, then-Postmaster General Megan Brennan said the agency could be out of money by Sept. 30. Last week, Louis DeJoy, a North Carolina businessman and GOP fundraiser who has donated to Trump in the past, succeeded Brennan.

Postal Service spokesperson David Partenheimer said that more recent trends “indicate that our 2020 financial performance will be better than our early scenarios predicted," though he said much remains uncertain.

"Our current financial condition is not going to impact our ability to deliver election and political mail this year,” Partenheimer said.

But Condos, who is president of the National Association of Secretaries of State, fears that keeping such a promise could force the Postal Service to cut back on routine services, which may see voting materials prioritized over regular mail. The pressure is also on since absentee ballots for overseas military members are sent 45 days before Election Day, or Sept. 18 — less than three months away.

“This whole idea that we have until November to decide, we really don’t,” Condos said.

The Postal Service consistently ranks as Americans' favorite federal agency, with recent approval ratings topping 90%. The issue is also one that doesn't break down neatly along ideological lines. Congressional Democrats are clamoring to “save the post office,” and Sens. Bernie Sanders and Elizabeth Warren are among those proposing boosting Postal Service profits by having it expand into banking services, which it provided for decades until the 1960s.

Rural Republicans like Alaska Rep. Dan Young have also called for defending the post office. Still, some conservatives say tying its funding to Election Day jitters is a partisan ploy.