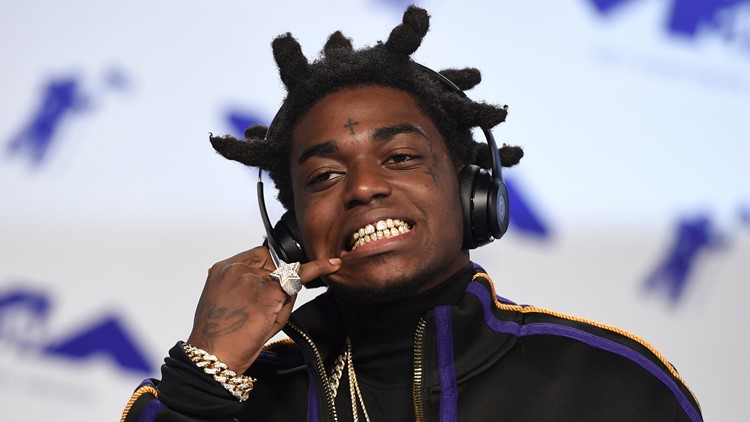 Photo by: Jordan Strauss/Invision/AP
FILE - In this Aug. 27, 2017 file photo, Kodak Black arrives at the MTV Video Music Awards at The Forum in Inglewood, Calif. Officials say Florida rapper Kodak Black was arrested on federal and state weapons charges just before he was to perform at a hip-hop festival. The U.S. Marshals office says in a news release that the 21-year-old Black was taken into custody Saturday, May 11, 2019 at the Rolling Loud Music Festival at Hard Rock Stadium in Miami Gardens. The statement didn’t elaborate.(Photo by Jordan Strauss/Invision/AP, File)

The U.S. Marshals Service said in a news release that Black was arrested Saturday at Hard Rock Stadium in Miami Gardens. The statement said he was charged with a crime in connection with weapons, but didn't elaborate.
Author: Associated Press
Published: 12:56 PM CDT May 12, 2019
Updated: 1:54 PM CDT May 12, 2019

The Rolling Loud Music Festival celebrating global hip-hop artists in South Florida did not go so well for Kodak Black and Lil Wayne.

The U.S. Marshals Service said in a news release that Black was arrested Saturday at Hard Rock Stadium in Miami Gardens. The statement said he was charged with a crime in connection with weapons, but didn't elaborate.

Meanwhile, Lil Wayne said on social media that he refused to perform after being subjected to a search by security personnel or police. It wasn't immediately clear Sunday who had done the pat-down on the superstar rapper, whose real name is Dwayne Michael Carter Jr.

But here's what he had to say on Twitter:

"To all my fans who came to see me at Rolling Loud, I'm sorry but I won't be performing," the post says. "The Festival Police (Not Rolling Loud) made it mandatory that I had to be policed and checked to get on the stadium grounds. I do not and will not ever settle for being policed to do my job."

As for Kodak Black, whose current name is Bill Kapri and who was born as Dieuson Octave to Haitian American parents in Florida, this arrest is the latest in a lengthy rap sheet he has assembled at the age of 21.

Most recently, Black was arrested last month on drug and weapons charges as he crossed from Canada into the U.S. near Niagara Falls, New York. In Florida, he has been charged at different times with drug and weapons possession, armed robbery, sexual assault, probation violations and fleeing from officers.

The Bureau of Alcohol, Tobacco, Firearms and Explosives and Miami-Dade County police were also involved in his most recent arrest.