The pilot and three passengers were killed in the accident. 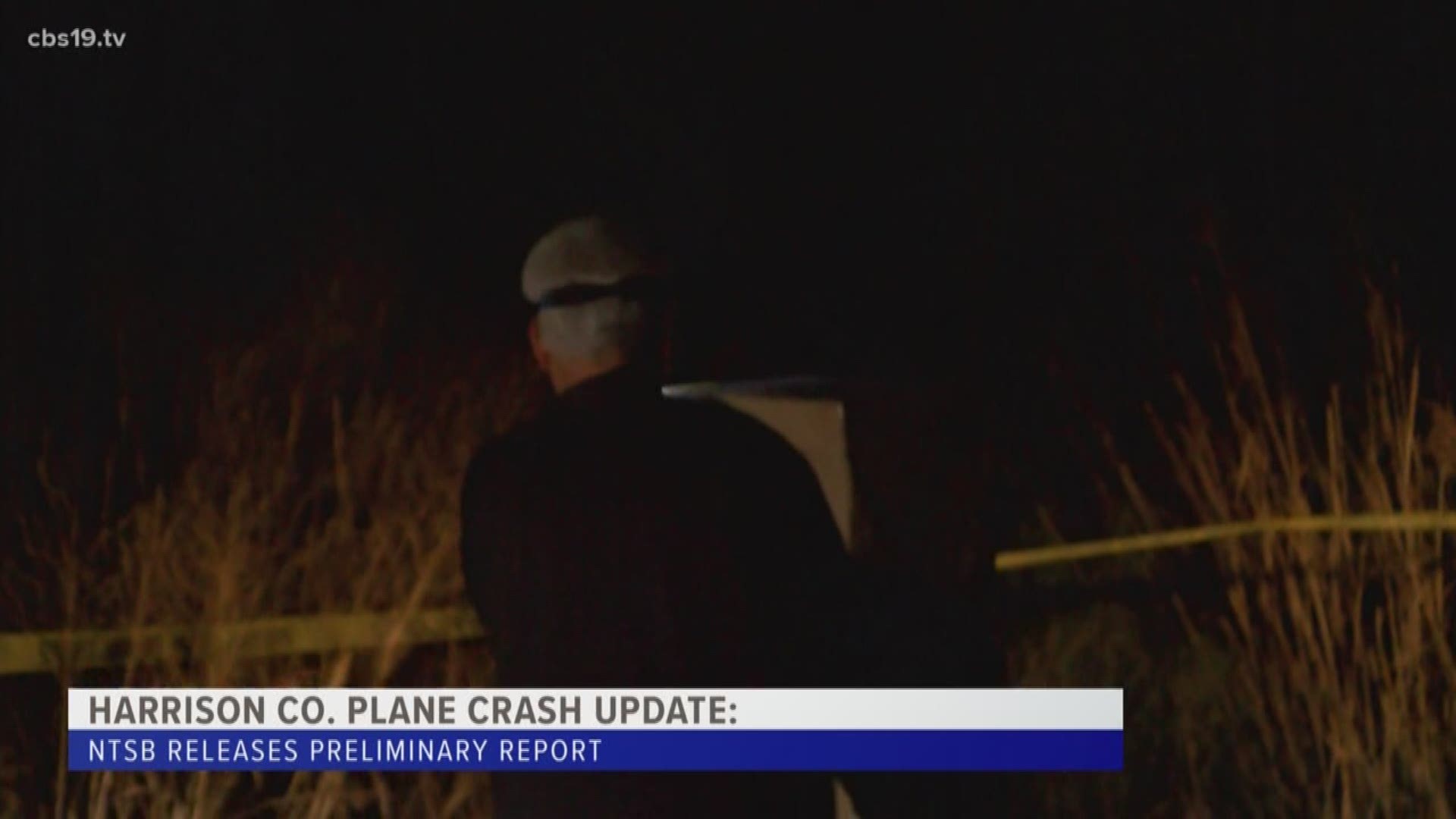 HARRISON COUNTY, Texas — The National Transportation Safety Board has released their preliminary report on a recent fatal plane crash in Harrison County.

The crash claimed the lives of:

The preliminary crash information can be seen below:

According to the NTSB, on Saturday, March 9, around 10:30 a.m. a Cessna T337C airplane, with the registration number N922EJ, was destroyed when it collided with trees and terrain during a descent near in Harrison County, near Longview.

The private pilot and three passengers were fatally injured.

The airplane was sold to and operated by the pilot under the provisions of Title 14 Code of Federal Regulations Part 91 as a personal flight that was not operated on a flight plan, according to the report.

The flight departed Lancaster Regional Airport, near Lancaster, Texas, around 9:30 a.m. and was en route to the Lakefront Airport, near New Orleans, Louisiana.

An employee at LNC reported around 9:30 a.m, the pilot and three other people came to the airport. The pilot came inside and bought one quart of oil.

"He was in a good mood and told me that his daughter was from Houston and they were flying to Louisiana," the employee said, according to the report.

The pilot then went out and did conducted an approximate 10-minute pre-flight, put oil in the front engine and his son brought the empty bottle in to throw it away, the report states.

Then, they entered the airplane, started it up and let it run for about five minutes.

The report states the airplane was taxied toward the south ramp out of sight. The self-serve fuel is located down that way and it was a long enough period of time for the pilot to service the airplane with fuel. After that, the airplane took off and flew away.

"The employee said that a severe thunderstorm went through about between 7:30 a.m. and 8:30 a.m.," the report reads. "At the time of departure, the thunderstorm had passed through and the weather present at LNC was clear."

According to the NTSB, a friend of the family later reported the airplane was missing and an Alert Notice (ALNOT) was issued.

The NTSB says around 7 p.m., a witness was driving down a road to go hunting in Harrison County when he noticed scattered trash along a clearway above an underground pipeline in a wooded area. The report states the man looked further at the trash and discovered it was an plane crash. He then called 911.

According to initial information from the Federal Aviation Administration, the pilot held a private pilot certificate with a single engine land airplane rating.

The pilot's logbook was found in the wreckage.

The NTSB reports the last two entries in the logbook were dated May 7, 2005, and August 23, 2018. Using flight time carried forward on the last page, the pilot's total logged flight time was 250.9 hours.

According to the prior owner of the airplane, it recently underwent an annual inspection shortly after the sale. He sold the airplane "in the fall" and that was the last time he flew it, the NTSB reports.

According to the NTSB, the prior owner, in part, reported, "the plane performed perfectly. Total airframe time was about 1800 hrs motors were both about 600 hrs. Excellent flying airplane. Good radios and everything worked properly the last time I flew it."

At 10:25 a.m., the day of the crash, the recorded weather at the East Texas Regional Airport, near Longview, was:

According to the NTSB, the main wreckage, which consisted of the fragmented fuselage, empennage, inboard wings sections and both engines, were found embedded about six to eight feet below grade in wooded terrain about 62° and 10 nautical miles from the East Texas Regional Airport.

Highly fragmented sections of the fuselage, wings, and empennage were found in the woods widely distributed around the main wreckage.

A backhoe was used to raise the wreckage from below grade.

Both engines did not exhibit any anomalies or damage that could not be associated with the ground impact. The rear propeller blades were attached to their hub and the hub remained attached to its propeller flange. However, the flange was separated from its engine crankshaft just forward of its flange, according to the NTSB.

The outboard section exhibited s-bending. A section of outboard wing leading edge that housed landing lights was found about 072° and 1.7 nautical miles from the main wreckage.

The Harrison County Justice of the Peace was asked to perform an autopsy on the pilot and to collect toxicological samples.

Radar data from the FAA was requested for plotting the flight's recorded track and a weather study will be conducted to determine the weather along the recorded track.

EDITOR'S NOTE: The NTSB wishes to stress this is preliminary information and is subject to change when the final report is released.