From human error to connectivity problems, a number of counties reported issues during the Nov. 5 elections. So what is being done to resolve them before 2020? 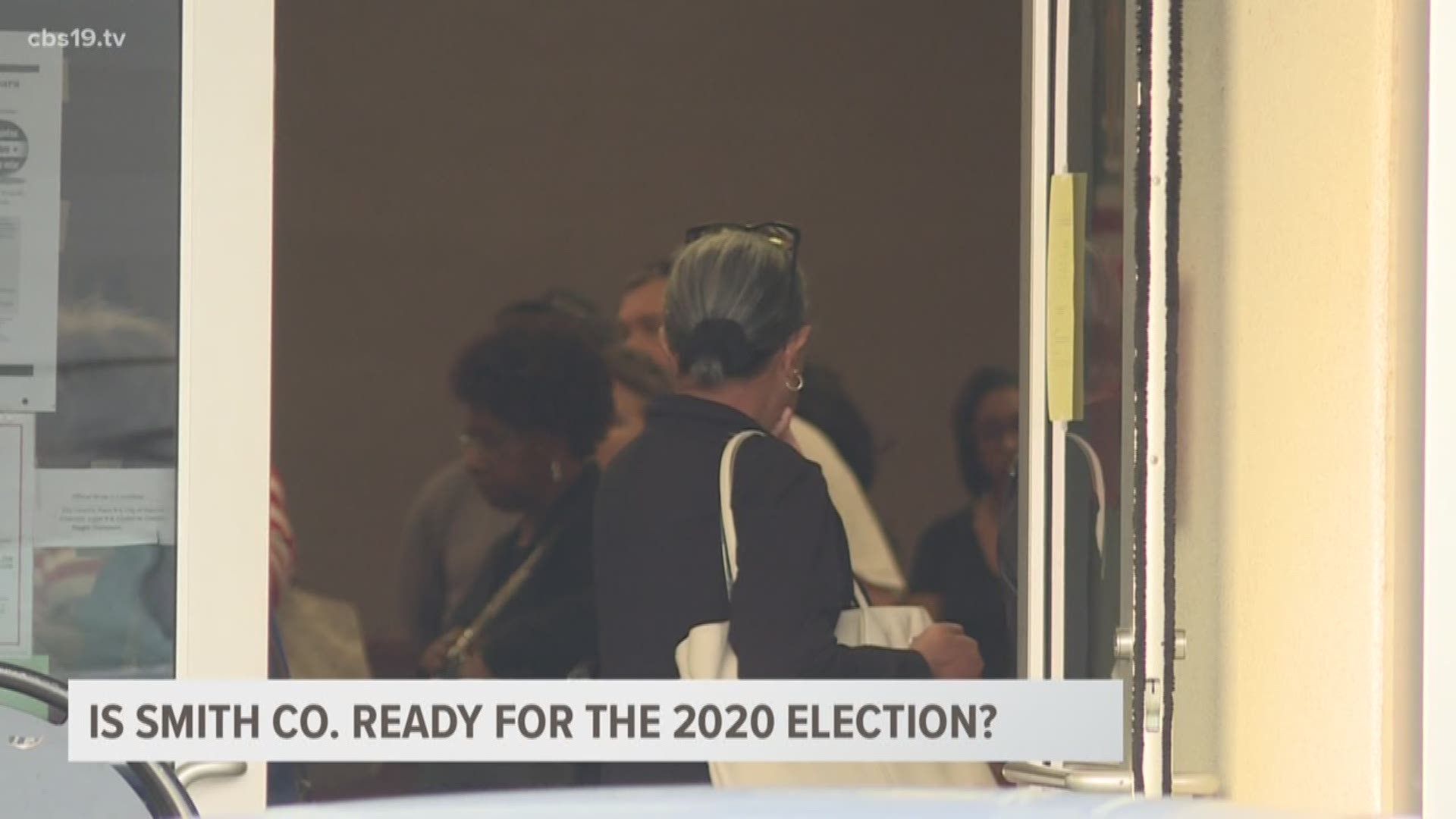 It was not long ago when voting was done by filling in bubbles that would be turned into a machine that scanned the ballots. In fact, many counties in the country still use this method.

However, Texas has invested in voting machines designed to make the voting process easier and faster.

"And that's the reason why we have this technology, so I can move quickly," Smith County elections clerk Nancy Nichols explained. "I have really not seen that the technology is speeding up the voting process that much.”

However, in the Nov. 5 election, some voting locations were anything but expedited. In some Smith County polling places, there were long lines and waits for as long as 30 minutes to an hour to cast a ballot.

The trouble is there were only a little more than 16,000 people who voted Tuesday, four times less than the 78,000 who turned out in last year's Midterm Election, with the looming 2020 primaries and presidential elections still to come.

“I feel like they had a hard time getting everything connected. But I don't know if it was a connection issue," said Jarren Gonzalez, who turned out early for Tuesday's election. "I think was more of trying to get connected to everything and it kind of threw everything off.”

Of the 34 polling locations in the county, at least five reported having some technical issue:

"Our laptop that checks the voter in, like that's your poll book, and so they were having some connectivity issues with the management system, and just the familiarity of new technologies," Karen Nelson, Smith County Elections Administrator, said. "Not with voting machines."

However, Nancy Nichols says she was aware of more locations having issues than the five locations reported by Nelson.

One of the issues was a new security measure was added to the set-up process. However, Nichols says the poll workers were not aware of the change.

"They didn't tell people. So no one out in the field knew about it. It wasn't in the instructions," Nichols said. "And that created a no-win situation for clerks like me who simply could not get the check in process completed."

With no connection, some polling locations opened later than they were supposed to causing problems for voters like Jarren Gonzalez.

Even with the risk of other voters like Gonzalez who left with the intention to return, Nelson says the county never considered extending the polling hours.

"Of course you don't want a voter to have to leave that location and go somewhere else," Nelson said. "But that is the beauty of the county-wide voting is they can choose any location on the list to cast their ballot."

It was more than just Smith County reporting issues at the polls. CBS 19 reached out to our TEGNA sister stations across Texas and found issues in a number of other counties including Tarrant, Harris and Midland counties.

RELATED: Some early morning voters experience problems at the polls in Tarrant County

CBS 19 received a statement from the Office of the Texas Secretary of State concerning the issues:

"Yesterday's election was the first in which many counties were using the equipment that they recently purchased, and as such, having some teething problems on a first run with new machines and procedures is not unexpected.

The Office of the Texas Secretary of State has been in, and continues to be in touch with local elections officials and administrators to ensure smooth elections as well as the integrity of our electoral process. We have no doubt that processes will only continue to improve, and we are confident in the security of our systems heading into the 2020 elections."

Nelson says she is confident any issues with the voting process will be fixed before the 2020 Texas Primary and the 2020 Presidential Election.

"That's our goal, is for everyone to be able to cast that ballot," Nelson said. "So we are trying to work through that and prepare for 2020 and going forward."

However, there are voters who are still skeptical if the county will be ready.

"From what happened right now? I don't know to be honest with you," Gonzales said.

The clock is ticking for election officials across the state. The Texas Primary is a little more than 100 days away on March 3.