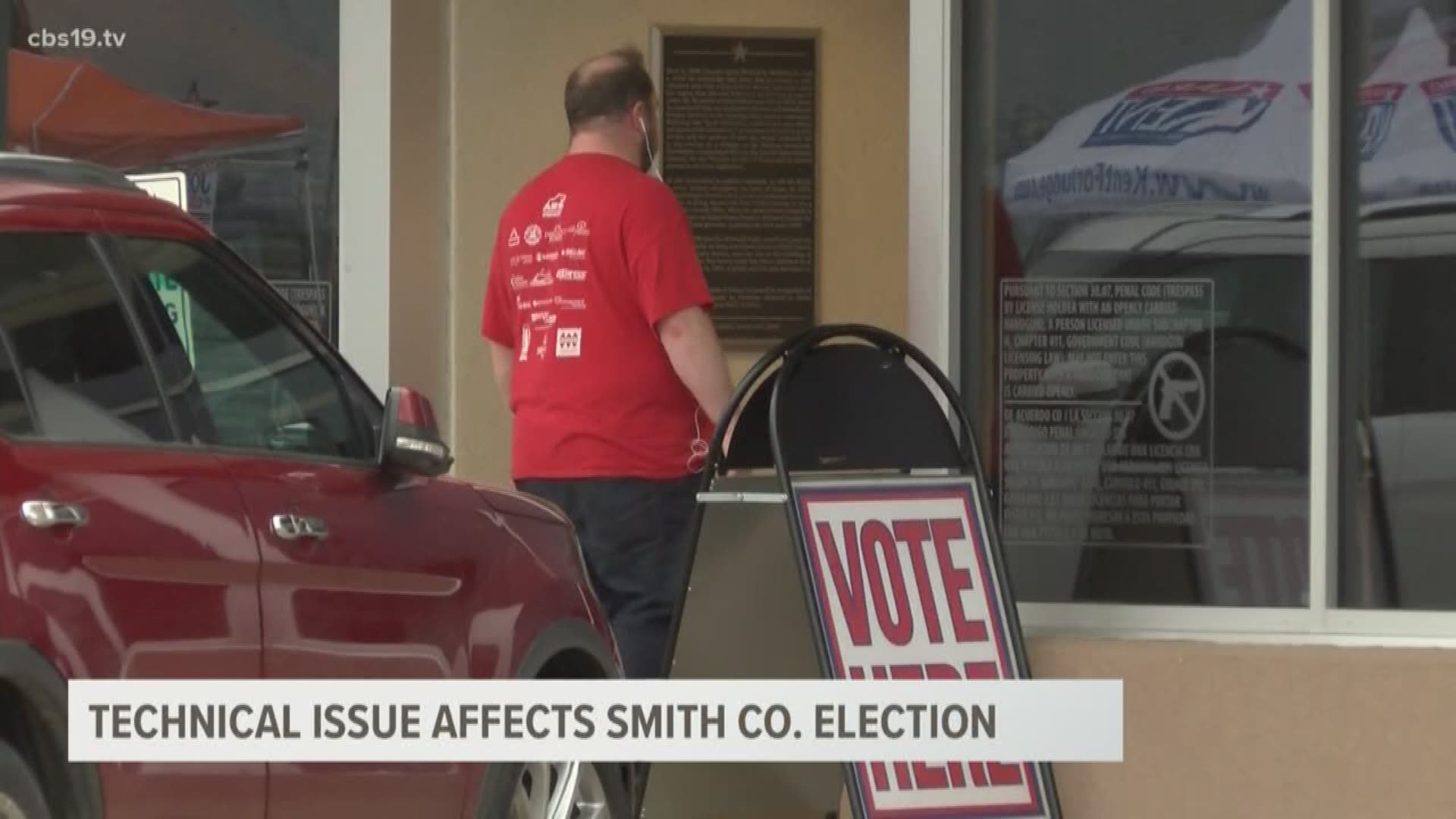 A technical error on a handful of early voting ballots may have impacted Republican ballots for the Precinct 4 Constable runoff, according to the Smith County Election Office.

Some voters attempting to cast their vote for incumbent Smith County Precinct 4 Constable Josh Joplin or his opponent, Curtis Wulf, were unable to because neither candidate was on the ballot.

Chinakos was one of a handful of voters to notice something was wrong with the ballot.

"So when we were going through the process on the computer, we got [to] the first page, and it had the judges on it," Chinakos said. "I hit 'next' and the voting was over. The election supervisor came out and she manually entered the program to help us re-vote. She destroyed our previous ballots."

Nelson said the issue was fixed temporarily, and by Tuesday, it should be fixed permanently.

"The county spent over a million dollars on these election machines," incumbent Smith County Constable Pct. 4 Josh Joplin said. "We spent thousands of dollars a year for IT specialists and things like that to make sure these elections are properly done and vetted. And I just feel like the the citizens of this county county had been stripped away from that right to vote because of a technical error."

Currently there is no law that states if there are voting errors, voters are required to recast their ballot. In this instance, those running in the election would have to file a lawsuit in order to have a re-election.

According to Judge Moran and Nelson, the problem was limited to only Republican ballots and did not affected the runoff for the 114th  Judicial District Court Judge election.

The Smith County Elections Administration Office encourages voters who believe their ballot may have been affected by the error to make a report.

"During the first few hours of the first day of early election voting for the July 14 primary election, the Smith County Elections Administration Office became aware of a technical issue affecting certain Republican Primary Run-Off ballots relating to the contest for Precinct 4 Constable.

"After an initial investigation with the election equipment and software vendors, by 12:30 p.m. on Monday, the Elections Administration Office instituted a process change at each of the five early election polling locations as a temporary fix to the technical issue. According to the Smith County Elections Administrator, she anticipates that a permanent fix to the technical issue will be in place prior to polls opening on Tuesday, June 30.

"At this point, the precise number of affected ballots is unknown, but the issue appears limited to a handful of precincts. Additionally, the technical issue did not affect the Democratic Primary run-off race, nor did it affect the County-wide run-off race for the 114th Judicial District Court Judge position.

"The problem was first reported by voters who alerted poll workers that their ballot did not contain the run-off race for Precinct 4 Constable. As always, voters are encouraged to closely monitor the content of their ballot and report any discrepancies before casting their ballot and before leaving the polling location. Procedures are always in place to allow for resolution of any issues at the polling location, including the casting of a provisional ballot.

"The Smith County Elections Administration office does not anticipate that this will be a continuing issue for the remainder of the run-off election. However, anyone who cast their vote before 12:30 p.m. on Monday, June 29, and who believes that their ballot incorrectly omitted the Precinct 4 Constable race is encouraged to contact the Elections Administration Office and make a report."