Arthur D'Andrea has served as a commissioner for the Public Utility Commission since 2017.
Author: Paul Livengood
Published: 12:33 PM CST March 1, 2021

AUSTIN, Texas — Public Utility Commission (PUC) Chairman DeAnn Walker resigned from her position Monday, saying doing so was "in the best interest of this great State of Texas."

"I stand proud that I worked endless hours over the past two-and-a-half weeks to return power to the grid. Despite the treatment I received from some legislators, I am proud that I spoke the truth," Walker said in part in her resignation letter. "I know that I acted with the best of intentions and used my best judgment on how to respond once the crisis was upon us, as well as to the days that led to the crisis."

As of Monday afternoon, Walker's biography page on the PUC's website displays an error message.

A spokesperson for Gov. Greg Abbott released the following statement in the wake of Walker's resignation:

"The Governor thanks Chairman Walker for her years of service to the State of Texas. Our focus is to continue working collaboratively with the Legislature on reforms to our power system and look forward to passing lasting and meaningful solutions to ensure these tragic events are never repeated." 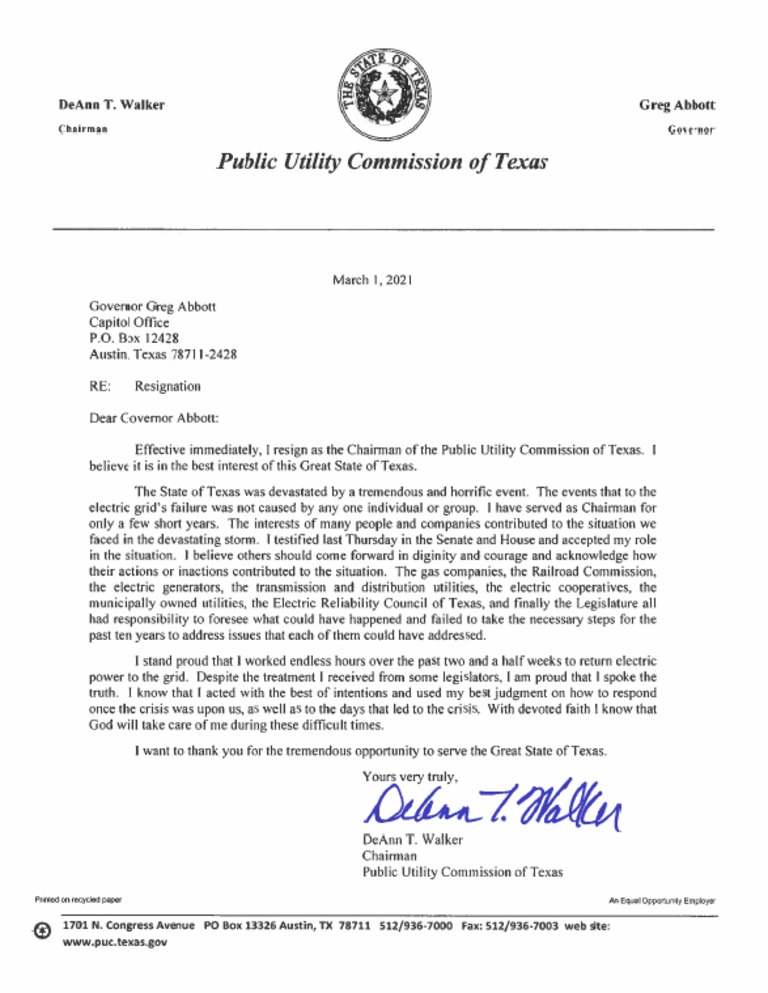 D'Andrea has served as a commissioner for PUC since November 2017. He formerly served as an assistant general counsel in Gov. Abbott's office and served as an assistant solicitor general for the Office of the Attorney General of Texas. He is a member of the State Bar of Texas. He received a Bachelor of Science in Chemical Engineering from The University of Texas at Austin and a Juris Doctor degree from The University of Texas School of Law.

"Immediately following the storm, I pledged to the people of Texas that I would get to the bottom of the crippling power outages that began on Feb. 15, leading to tragic loss of life and billions in damages to homes and infrastructure across the state," Patrick said. "There is no question the arctic temperatures the state experienced beginning on Feb. 14 were historically unprecedented."

Patrick said that after almost 24 hours of testimony in the Senate Business and Commerce Committee's investigation of the power outages, including nine hours from Walker and Magness, he believes it is clear neither adequately addressed the challenges of the winter storms.

"Our State senators repeatedly asked for their analysis and suggestions regarding what could have been done differently and what needs to be done going forward to prevent a similar problem in the future," Patrick said. "The chair and the CEO offered few ideas. Frankly, I was shocked by their failure to respond. Both the PUC chair and ERCOT CEO said they were prepared the day before the storm hit in full force, but obviously they were not. In his testimony before the Senate Committee, Vistra Corporation CEO Curt Morgan stated that, on Feb. 10, the Wednesday before the storm hit, he had informed ERCOT that Vistra didn't believe ERCOT had adequate power to address the arctic temperatures and precipitation that was projected."

According to Patrick, Morgan said he was surprised ERCOT did not respond to that information with any sense of urgency. Magness testified the information was not delivered to him, Patrick said.

"I do not make this call for the resignation of the PUC Chair and the ERCOT CEO lightly," Patrick said. "These are two good people who have worked very hard. ERCOT’s job is to manage our electricity grid and the PUC oversees ERCOT. The lack of adequate preparation by both the ERCOT CEO and the PUC chair prior to the storm, their failure to plan for the worst-case scenario and their failure to communicate in a timely manner dictates they are not the ones to oversee the reforms needed."

RELATED: 5 ERCOT board members who live out of state to resign following board meeting Wednesday

ERCOT has already seen a litany of resignations in the aftermath of the winter storms. Five ERCOT board members resigned and a sixth, who was set to fill a vacant seat, withdrew his candidacy.

On Feb. 19, Texas Attorney General Ken Paxton said he was launching an investigation related to power failures across the state during the winter weather disaster.

“The investigation into what happened during the winter storm crisis is just beginning," Patrick said. "The state legislature will mandate reform of ERCOT and ensure the stability of the grid. I remain committed to making sure this problem is fixed so that we are prepared to face a power challenge like this should a major storm happen again.”

A bailout for the Texas energy market? A domino effect after the winter storm and crazy high bills