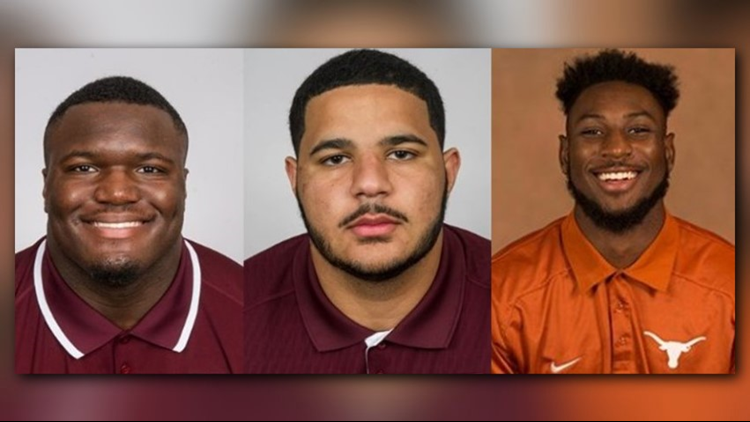 Gilmer native and University of Texas defensive back Kris Boyd suited up on the field along with Texas A&M's Daylon Mack, a defensive lineman out of Gladewater, and offensive lineman Erick McCoy, of Lufkin.
Author: Reagan Roy
Published: 8:30 AM CST March 3, 2019
Updated: 5:51 PM CST March 4, 2019

INDIANAPOLIS — East Texas was well represented at the 2019 NFL Scouting Combine over the weekend in Indianapolis, Indiana.

Gilmer native and University of Texas defensive back Kris Boyd suited up on the field, along with Texas A&M's Daylon Mack, a defensive lineman out of Gladewater, and offensive lineman Erik McCoy, of Lufkin.

As a senior at Lufkin High School, McCoy led Todd Quick's team on the offensive line by racking up 27 pancakes ad 34 knockdowns. He graded out at 95 percent and earned first-team all-district and second-team all-state honors.

McCoy was not highly recruited despite his stellar numbers, however Aggies coaches saw enough in him to offer a scholarship and he worked his way to becoming a three-year starter.

He was a team captain in 2018, again starting all 13 games in the middle of the offensive line called the "Maroon Goons."

McCoy, who analysts compared to Green Bay Packers center Corey Linsley, earned a draft grade of 5.91 (a chance to become an NFL starter).

In high school, Mack played under the direction of John Berry at GHS.  He was selected as an Under Armour All-American as a senior after a season that saw the star player record 78 tackles, five sacks and four forced fumbles. He also batted down two passes and blocked a pair of kicks. On the offensive side of the ball, he rushed for 262 yards and 12 touchdowns.

As a true freshman in College Station, Mack playing in all 13 games as a key reserve. He recorded 32 tackles (9.5 for loss).

Though his total tackles (19) dropped as a junior in 2017, Mack got his first collegiate start and had five tackles for loss and a sack on the season.

Coaches inserted Mack in the starting lineup for all 13 games of his senior season and he delivered with 32 tackles (10 for loss), 5.5 sacks and a blocked kick.

Throughout his four years in Austin, Boyd played in 51 games and made 33 career starts. In 2017, he earned second-team All-Big 12 honors from the Associated Press.

In 2018, Boyd was named a semifinalist for the Jim Thorpe Award which is presented to the nation's top collegiate defensive back. The award was won by another East Texan and ex-Longhorn, Aaron Ross, in 2006.

In the 2018 Big 12 Championship game against the Oklahoma Sooners, Boyd recorded six tackles and a pass breakup. He also racked up four tackles (one tackle for loss) in UT's New Year's Day 28-21 victory over the Georgia Bulldogs in the Allstate Sugar Bowl.

Boyd played prep ball at Gilmer High School under former UT assistant Jeff Traylor. He was a three-time All-District honoree and was also named to the All-State team. He was selected to participate in the 2015 U.S. Army All-American Bowl and was invited to Nike's 2014 The Opening.

The NFL Draft prospect grading scale is as follows: