Potter was going to scrap the project but was happy he did not because he was able to take his senior photos right next to it. 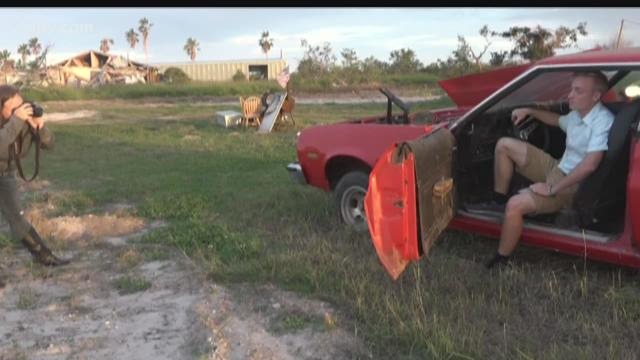 There was no shortage of photos showing the devastation left behind by Hurricane Harvey, but one Rockport photographer is capturing pictures of devastation in a different frame.

"These seniors who have a very different senior year than they expected," DeLano said. "I thought it was a really cool thing for me to be able to capture for them that they came through this."

She started a series capturing those affected by Harvey in front of rubble and debris.

"Places they loved to go or their homes or their cars," DeLano said. "The things that were important and lost to them."

Charles Potter's home on Jacenek Road was demolished. Most of the homes nearby were also destroyed.

"I couldn't recognize anything," Potter said. "All of the trees were gone, and everything was just... It was like I was dreaming or something."

The 1973 Ford Gran Torino he bought and worked on all summer was also ruined.

"This is really one of the first things that I really ever spent my earned money on, you know," Potter said.

Potter was going to scrap the project but was happy he did not because he was able to take his senior photos right next to it.

"And now I get to take pictures that I've wanted to take for a long time," Potter said. "It's one of the great things that happened to me after the storm."

And like Potter, others continue to pick up the pieces but have come together in the darkest of times.

The beauty that DeLano hopes to capture so people won't forget the good that remains after Hurricane Harvey.