Witnesses say horses were eating bark off of trees at Scarlett's Legacy Horse Rescue where there were unburied dead horses, poor drinking water 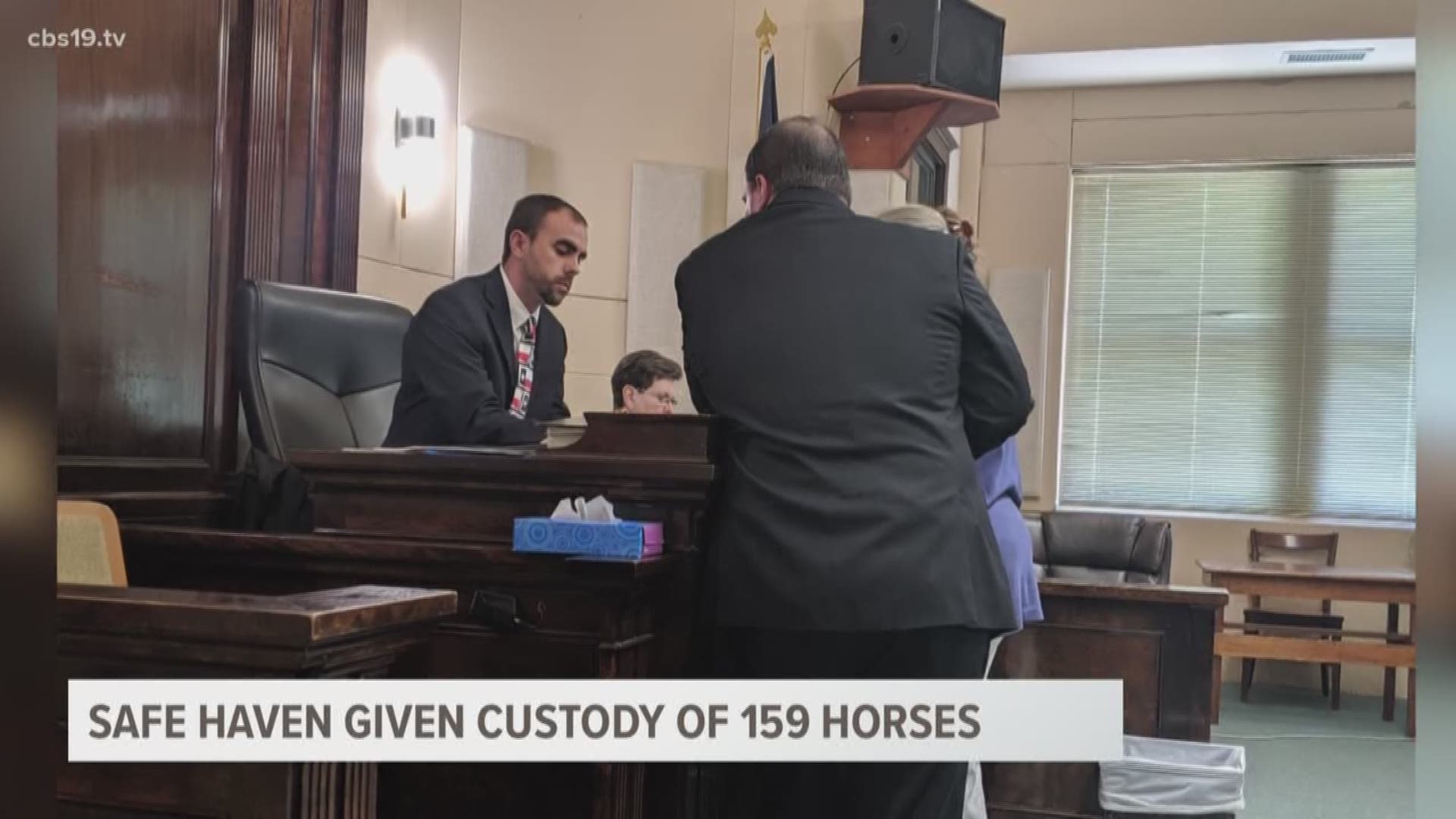 PITTSBURG, Texas — Multiple visits from authorities for dead horses, allegations pertaining to lies about how many horses were on the property and a lack of basic necessities for equine, such as food and water, were all outlined Friday afternoon in a Camp County courtroom.

Deanna Tiereney, owner of Scarlett’s Legacy Horse Rescue, and Patricia Sowka, the owner of the land Scarlett’s Rescue was operating on, were on hand for a hearing in which the state was looking to officially remove 159 horses from their possession and transfer custody to Safe Haven Equine Rescue.

According to Chief Deputy Clark, the CCSO's first encounter with Scarlett’s Legacy was October 26, 2018. He said horses in Tiereney’s possession were photographed in a poor state, but she told law enforcement she had recently rescued them in that state.

The next time deputies set foot on the property was on February 14, 2019, when they were called for a welfare check on the horses and again found the animals in poor living conditions, according to Chief Deputy Clark's testimony.

They would later visit Scarlett’s Legacy again nine days later in regards to dead horses.On February 26, deputies were on the property again and told Tiereney that she had exceeded the 1,000 pound-limit for burials on the property. Chief Deputy Clark says he informed Tiereney she would have to bury any future deceased animals at a qualified landfill.

After witnessing these conditions, Chief Deputy Clark said deputies told Tiereney the horses needed better care, but could not take legal action at the time due to a need for more evidence of neglect/abuse.

Chief Deputy Clark said on March 14, a CCSO investigator witnessed two dead horses from the roadway. Chief Deputy Clark says when the investigator spoke to Tiereney, she said she was down to 72 horses from the original 100 that were originally on the 45-acre property. Tiereney also stated there were three dead horses on the property. However, officials say there were actually six.

According to Chief Deputy Clark, on April 16, the CCSO received another call complaining about Tiereney's rescue. When deputies responded, they located a "downed" horse and were told a veterinarian was on the way. After inspecting the horse, the vet told deputies the horses was "downed" due t neglect.

During Chief Deputy Clark’s testimony, he said the CCSO returned to the rescue on June 6 and executed five animal cruelty warrants, seized four horses, and arrested Tiereney. A case against Tiereney for animal cruelty is still open at this time.

Deputies then executed a search warrant and found 163 horses on the property, in addition to the four that were already seized. Chief Deputy Clark said Tiereney misled deputies on the amount of horses living on the property multiple times.

He testified that on June 25 a woman called the CCSO saying she smelled an “odor of death” coming from the property. Deputies responded and again found horses in poor condition, starving and with dirty drinking water.

According to Chief Deputy Clark, a seizure warrant for all of the horses was signed on June 26. The horses were then seized the next day by the CCSO, the Safe Haven Equine Rescue and the Humane Society of the United States.

Chief Deputy Clark described the conditions the horses were living in as “muddy” and said the property was wooded. He claimed horses were eating bark off the trees.

Mikaela Vetters, a veterinarian at the Black Beauty Ranch testified she was on the property on February 14 and she “found a situation she would consider severe.”

Vetters was asked if the conditions the horses were living in could be considered cruel. She answered, “Yes.”

Jesse Hampton, the farrier who has been working on the rescued horses, testified that he removed rocks and sticks from abscesses in some of the horses' hooves.

Daniel Kincade, a local veterinarian, testified he worked on the rescued horses for 16 hours the day of the seizure.

Tiereney and Sowka settled on a pre-judgement agreement in which they were stripped of all ownership rights of the animals, and they and anyone associated with Scarlett’s Legacy were barred from owning any of the equine again.

Part of the agreement was that Sowka has immunity in the open animal cruelty case against Tiereney.

When judgement was handed down at the end of the day, Tiereney and Sowka were required to pay more than $42,000 for the costs associated with rescuing the equine.

Safe Haven Equine Center will now take custody of the horses and will release them to their original owners, pending vetting from the CCSO within the next 15 days.

“We will continue to feed them love them and care for them until they’re rehabilitated and placed in forever homes,” full-time Safe Haven volunteer Kerri Downs said.

Tiereney will be tried at a later date for animal cruelty.