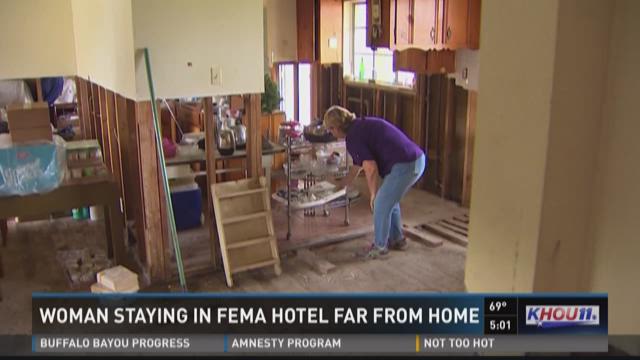 One woman says because she has a dog, the closest hotel that would take her FEMA voucher that would take them both is all the way down in Galveston. It's over 50 miles away from her actual home.

Six months ago, Cynthia Medellin never thought she’d still be in this situation.

“It’s been zero for us, there’s been no rebuilding," Medellin said. “There’s been no effort to rebuild at all because there aren’t any funds."

A double queen hotel room down in Galveston is now her home.

“We looked all over Houston, we looked all up I-10, all up 59 and in those days, in the storm, during the hurricane, there was really nothing to be found. Some of those hotels were under water," Medellin said. “I have a gulf and the ocean and all of that, and the sun when it’s sunny, but it’s not home.”

It’s been six months now since #Harvey, but over 3,100 families are STILL living in FEMA funded hotel rooms, while they figure out a way to rebuild. #KHOU11 pic.twitter.com/oxakEn2D1H

Slowly, but surely, they’ve been picking up the pieces. But without plumbing, basic home necessities, and the money to get it, right now, living at her home is not an option.

“If I can get my hands on dry wall, insulation, and that’s it, maybe we could even come back to the house and live and work on it as we’re here maybe in a room and that," Medellin said.

Flooded during Tropical Storm Allison in 2001, and tree damage from Hurricane Ike in 2008, Harvey is the third storm to hit her home, but it’s not one she’s ready to let go of just yet.

“I’ve got a girl hammer in there. I know how to read a measuring tape. Maybe I can do my own cabinets, or maybe I can do that, because there is quality material. It has good bones, this house," Medellin said.

Medellin says as soon as she can get the money for her walls and flooring, she can start rebuilding.

If you can help Medellin, contact her at ccs.mede@gmail.com.