More than 10 people spoke at the special session Monday night. Some supported the district's code, while others said the code was racially discriminatory. 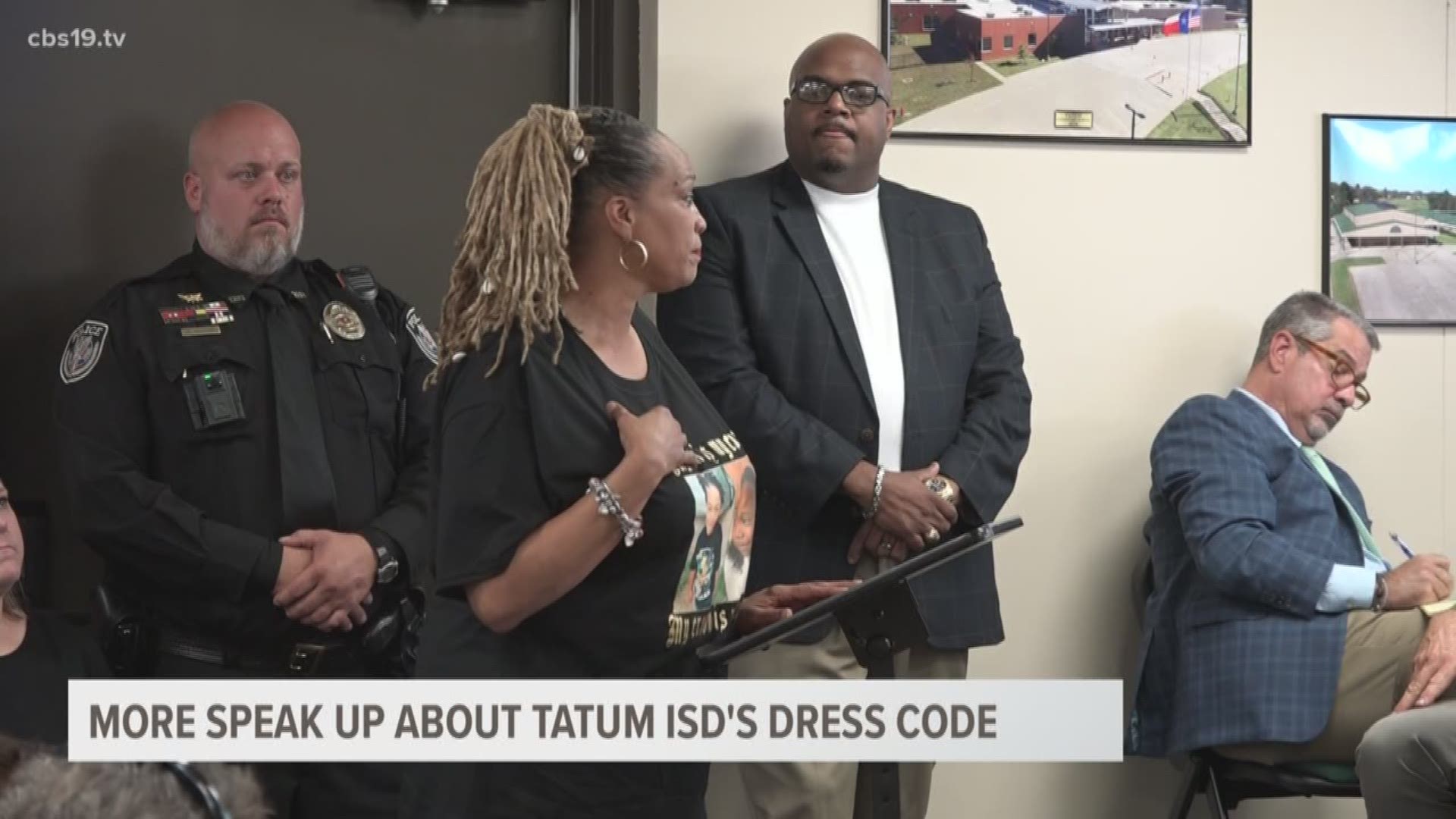 TATUM, Texas — The Tatum Independent School District is responding to criticism that their hair code portion of the dress code is discriminatory.

The district held a special session Monday in front of a packed room to allow families to speak their mind on the issue.

The controversy started during the last regular session of the Tatum ISD board, when Randi Woodly, the grandmother of a 4-year-old student, alleged the superintendent told her that her grandson's hair did not meet the district guidelines.

She says the superintendent gave her three options: Cut his hair, braid his hair, or put him in a dress.

More than 10 people spoke at the special session Monday night. Some supported the district's code, while others said the code was racially discriminatory.

"I understand that maybe the rules says do not have long hair," Jennifer Salaiscs said. "Times are changing, but just because they tell you that you have to cut your baby's hair doesn't mean they're being [discriminant] against you."

Salaiscs says parents have been supportive in possibly changing the code.

"I think a lot of the parents would be very supportive," Salaiscs said. "I feel it's just the message of the dress code being racist that's what's hindering the parents to be so supportive."

Jerry Hudman, an employee of the district says parents should make their voices heard at the next election.

"If you want changes to be done, get out and vote this thing of being racism," Hudman said.

Others stood firm on why they believe the district should change their policy.

"I strongly believe in rules. Rules make us feel safe. But within those rules are areas that should be and can be challenged," Channing Centers, an alumna of the district said.

Kambry Cox says she is concerned her son's dreadlocks are against district policy. According to the district's policy, if dreadlocks hang below the child's collar on his shirt, they are against the hair code.

"Ask yourself is my child's modern hairstyle really a negative reflection on the education he's receiving here?" Cox asked.

The district held an executive session as well, which was not open to the public.

The district released the following statement:

"Recently, social media claims have been made that Tatum ISD's hair code is racially discriminatory and that District administration suggested a student identify as the opposite sex for purposes of limiting the applicability of that policy. The District vehemently denies these claims. Furthermore, District administrators are strictly prohibited from discussing matters involving specific students or their individual circumstances pursuant to state and federal law.

"The District has implemented dress and grooming standards for many years. While the policy has evolved over time, the District has, and will continue to, ensure that it is applied to all students in a consistent and nondiscriminatory manner. One important step in maintaining this consistency is requiring the dress code be acknowledged by every student's guardian at registration. Further, the District provides parents with the opportunity to submit documentation to the campus administration requesting a possible exemption to the dress and grooming standards for a sincerely held religious belief.

"The District remains committed to providing an inclusive environment where all students are valued. The District is deeply concerned that the baseless claims being circulated at this time have cast doubt on that commitment. Rather than wade further into these divisive and unproductive waters, the District respectfully requests its stakeholders continue partnering with us to the meet the needs of this community."