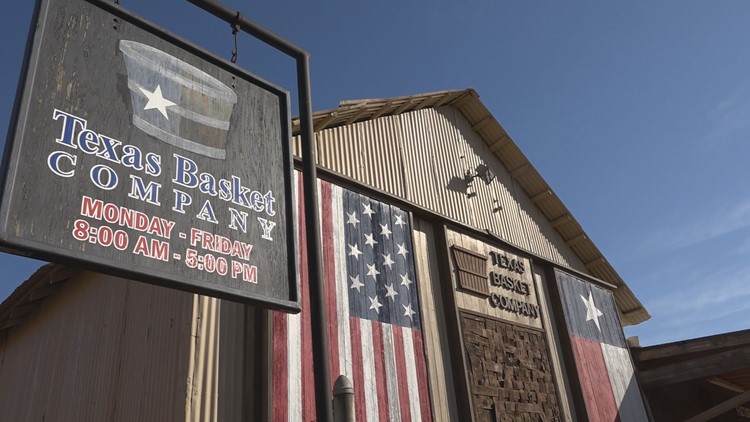 JACKSONVILLE, Texas — Everything is bigger in Texas, right?

So it should come to no surprise that the biggest basket making company in the nation calls the Lone Star State home.

“In the mid 70's, my father and I bought the basket factory from a Mr. Roy Shank and that's how we got started," owner Martin Swanson said. "It was called Newton Shank at that time. After a couple of years, we just changed the name to Texas Basket Company."

The Texas Basket Company, located in Jacksonville, has been up and running weaving wood into baskets for 100 years.

"It's just rather unique that you know that manufacturing places been around that long even at the same location and especially in a small town," Swanson said. "We start from scratch from a log and make up good design. That's the way this has been done for 100 years."

The earliest baskets coming out of Jacksonville were made for harvesting, transporting and storing different fruits and vegetables.

The way baskets are made is the same. All of the machinery is original, but the baskets themselves have changed.

“There were just two baskets being made: A bushel and a half bush," Swanson explained. "Now we probably make 200 or so, different shapes and sizes.”

The company even makes baskets shaped like all 50 states. Swanson says the least popular is Colorado.

It comes as no surprise that Texas is the most popular.