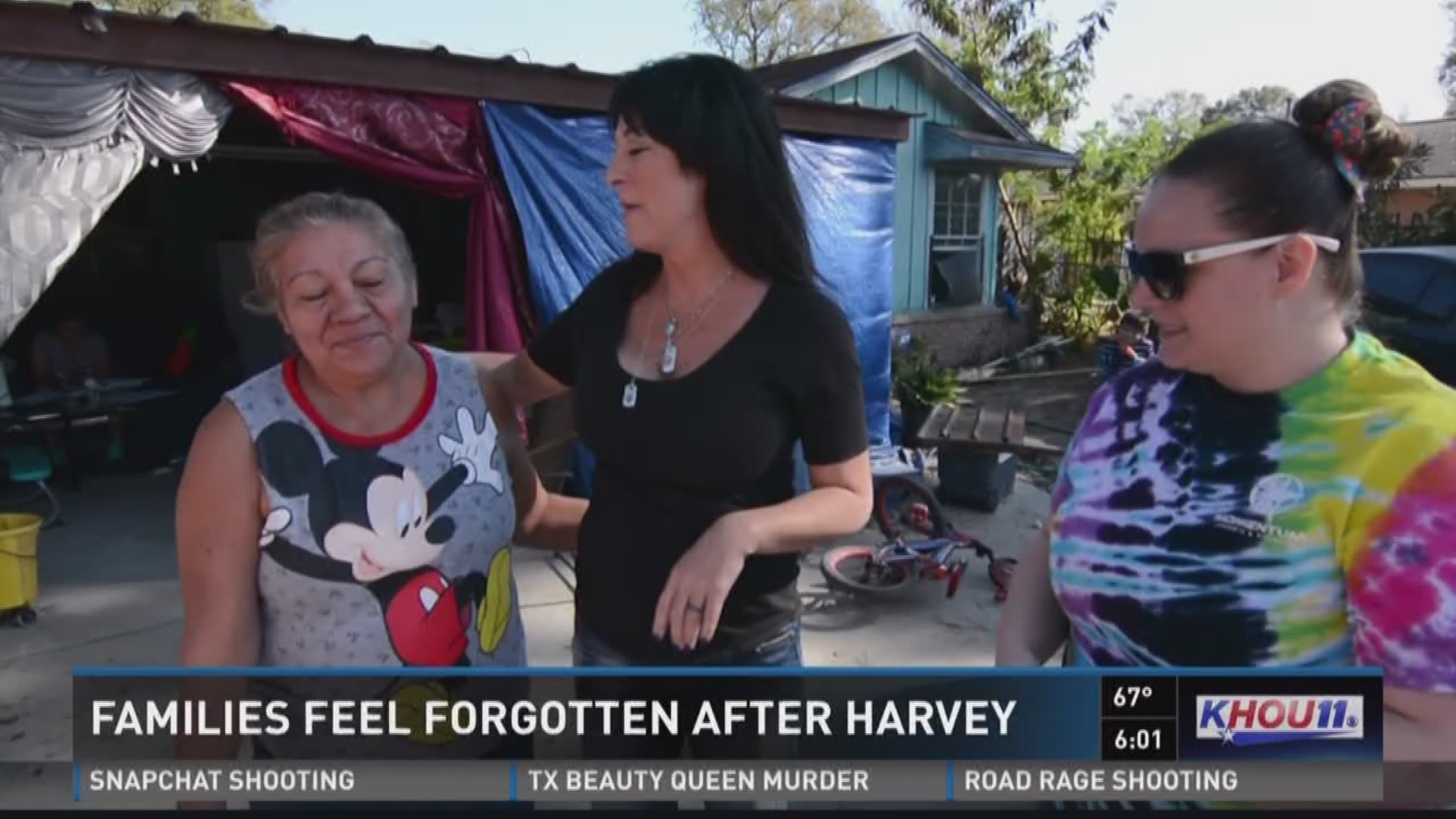 HOUSTON – The kitchen in Petra Cervantes’ home where she loved to cook is now a gutted mess.

The counters are missing along with her stove and refrigerator. Her wooden cabinets still hang, but only because she doesn’t have the money to fix them. Instead, she’s willing to risk that a deep cleaning is enough to kill any bacteria left by the floodwaters.

Cervantes tries not to think about all she’s lost. Three months after Hurricane Harvey hit Texas and flooded her east Houston home, her eyes swell when she talks about the destruction around her.

“I don’t feel like Christmas is here because we have nothing,” she said.

Her home is still uninhabitable, and her family—including her three grandchildren—are left with nowhere to go. So they’re living off their front porch underneath a carport outside their gutted home.

A tent provides shelter from the elements. Two couches and a glass table serve as a living room. Cervantes has assembled a small makeshift kitchen that allows her to cook for her family.

It’s not perfect, but “we’re surviving,” she said.

“A lot of people are already finished doing their houses, but not us,” she said. “Why? Because we don’t have help from FEMA so quick.”

Cervantes finally received a check from FEMA on Tuesday. By Thursday afternoon, two men began the long list of repairs.

1 / 24
Three months after Hurricane Harvey destroyed her home, Petra Cervantes and her family haven't been able to move back in. They're "surviving," Cervantes said, outside in a tent with a makeshift living room and kitchen.

Her home isn’t the only one affected in this east Houston neighborhood. Hundreds of others were flooded with more than five feet of water when Harvey forced nearby Halls Bayou out of its banks.

Most of the debris has been removed from the curbs, leaving behind bare spots where grass used to grow.

Some families, like Cervantes’, have moved outside in tents while they wait for repairs, others have decided to live inside with the little they have left.

Christine Clinkenbeard has been assisting residents throughout the neighborhood with food, clothing, even mattresses and box springs to those most in need.

She began making sandwiches out of her kitchen for residents and first responders near her neighborhood in The Woodlands. Soon after, she was accepting donations and coordinating relief efforts across the Greater Houston area. (Donations are accepted at Momentum Karate & Fitness in The Woodlands)

At least once a week, she brings donations to Cervantes’ neighborhood.

Residents there still need food and water. As winter approaches and temperatures cool, they need blankets and propane heaters. There’s a major need for building materials and volunteers to help rebuild.

You can help: Tap here to assist affected families

She said it’s as if this area of Houston has been forgotten.

“It’s a socioeconomic disadvantaged area to begin with, and Hurricane Harvey exacerbated that because people lost their cars, they lost their jobs because they couldn’t get to work, and now they’re stuck,” she said.

In her driveway, Cervantes pointed to homes where residents haven’t returned, then to another that has been sold. On street corners throughout the neighborhood are signs from buyers willing to purchase homes “as is.”

Cervantes and her family are going to stay.

Three months after Hurricane Harvey destroyed her home, Petra Cervantes and her family haven't been able to move back in. They're "surviving," Cervantes said, outside in a tent with a makeshift living room and kitchen.

She hopes to have a room finished by the end of the week so that her family can move back inside.

And she can’t wait for the day until her kitchen is complete.

“You don’t know how crazy I go when I cook in my kitchen,” she said.

With her only way to cook, Petra Cervantes is frying up fish for lunch! ...on her porch. #KHOU11 #Harvey pic.twitter.com/aFgv1qDmlS