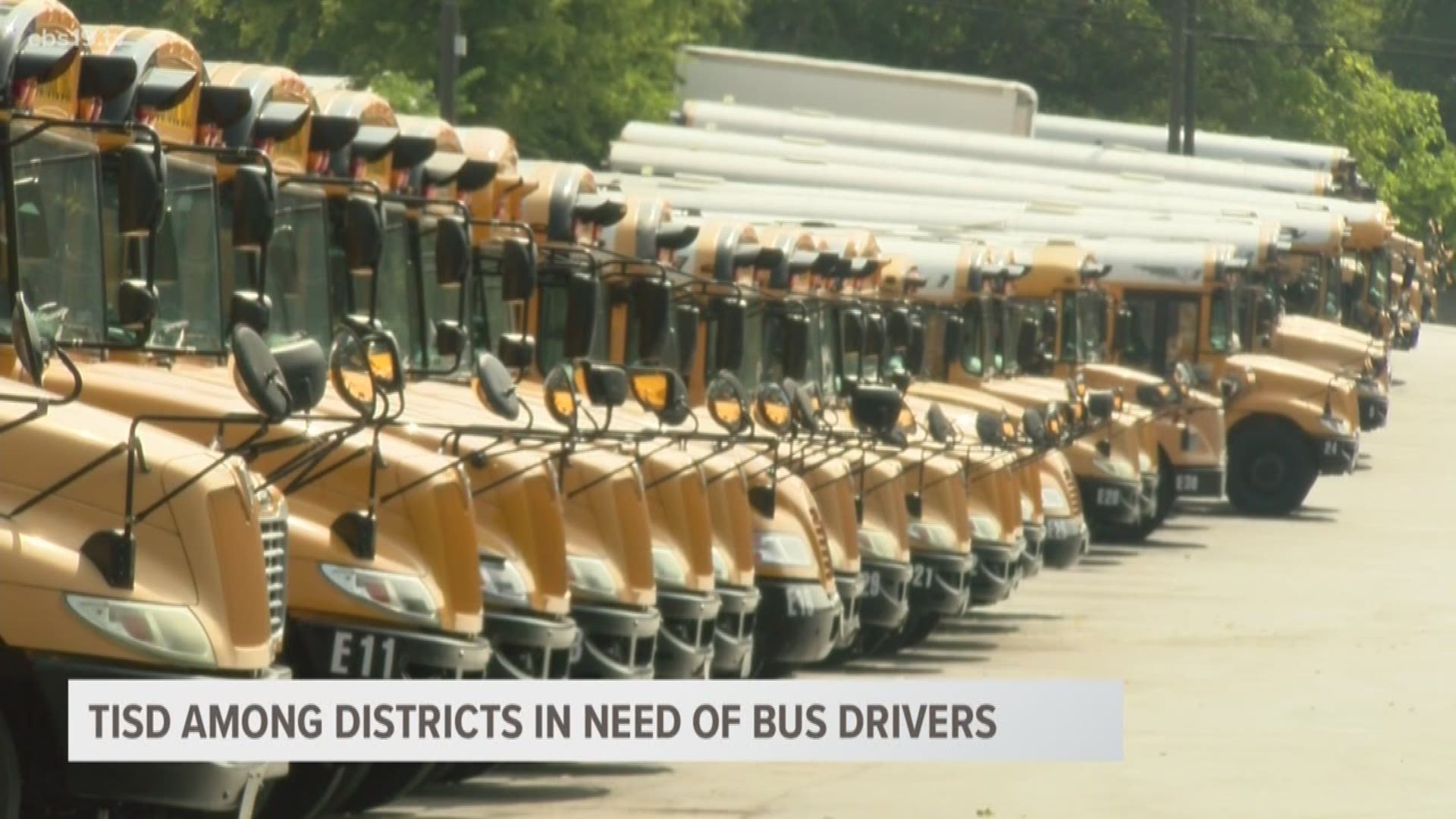 TYLER, Texas — School districts nationwide are fighting a shortage that impacts the classroom before the school day even begins; a need for school bus drivers.

Several East Texas districts, including Tyler Independent School District, are among those in need of qualified applicants to fill the vacancies.

“When we started schools last year, we were at 25 open positions," said Tyler ISD Director of Transportation John Bagert.

Since then, the district has hired at least four drivers, bringing its vacancy total to 21.

"One of the factors that we've had is with the improvement with the economy, there are higher-qualifying and higher-paying jobs that are available in the market," said Bagert. "I've lost several of my drivers to, for instance, construction companies where they drive heavy equipment significantly more than what we're paying now."

To address the pay difference, the district increased its pay for bus drivers last year from $14.25/hour to $16/hour, with at least fours hours of work a day guaranteed.

"We do give credit for previous experience," Bagert said. "We also have driver referral bonuses."

Any TISD employee who recommends a qualified driver to fill a position will be eligible to receive a referral bonus of up to $500.

"We are actively pursuing all the job fairs, looking at the campuses for those that are in teaching programs coming to work as a school bus driver and maybe getting some student management credit towards their degree," Bagert said. "We are publishing, not only on our website, but in the newspaper. We have signs that we post at the various campuses, ‘school bus drivers needed.'"

Bagert says the district is utilizing every resource available to recruit more drivers.

“When we’re able to talk to them, they’re interest level is very high," said Bagert. "We do lose a few of them, because as they go through the training process to get their CDL and the student management process before they get on a bus, sometimes, some of the candidates just find it’s really not their cup of tea."

In order for the district to not rely on those employees to help alleviate the shortage, Bagert says he would need to hire at least 15 drivers.

"You have to have a temperament for student management," said Bagert. "You have to understand that you’re dealing with students who have their own will, that have their own personalities, and you have to be flexible with how you deal with each student."

Minimum qualifications for the position include being at least 21-years-old and having the ability to pass a mandatory Texas Education Agency/Department of Transportation physical exam.

For more information on how to apply, visit Tyler ISD's website.