VERIFY: How would the 14th amendment disqualify President Trump from running for office again?

If the Senate doesn't convict President Trump during his second impeachment trial, a forgotten Civil War amendment could exclude him from holding office again. 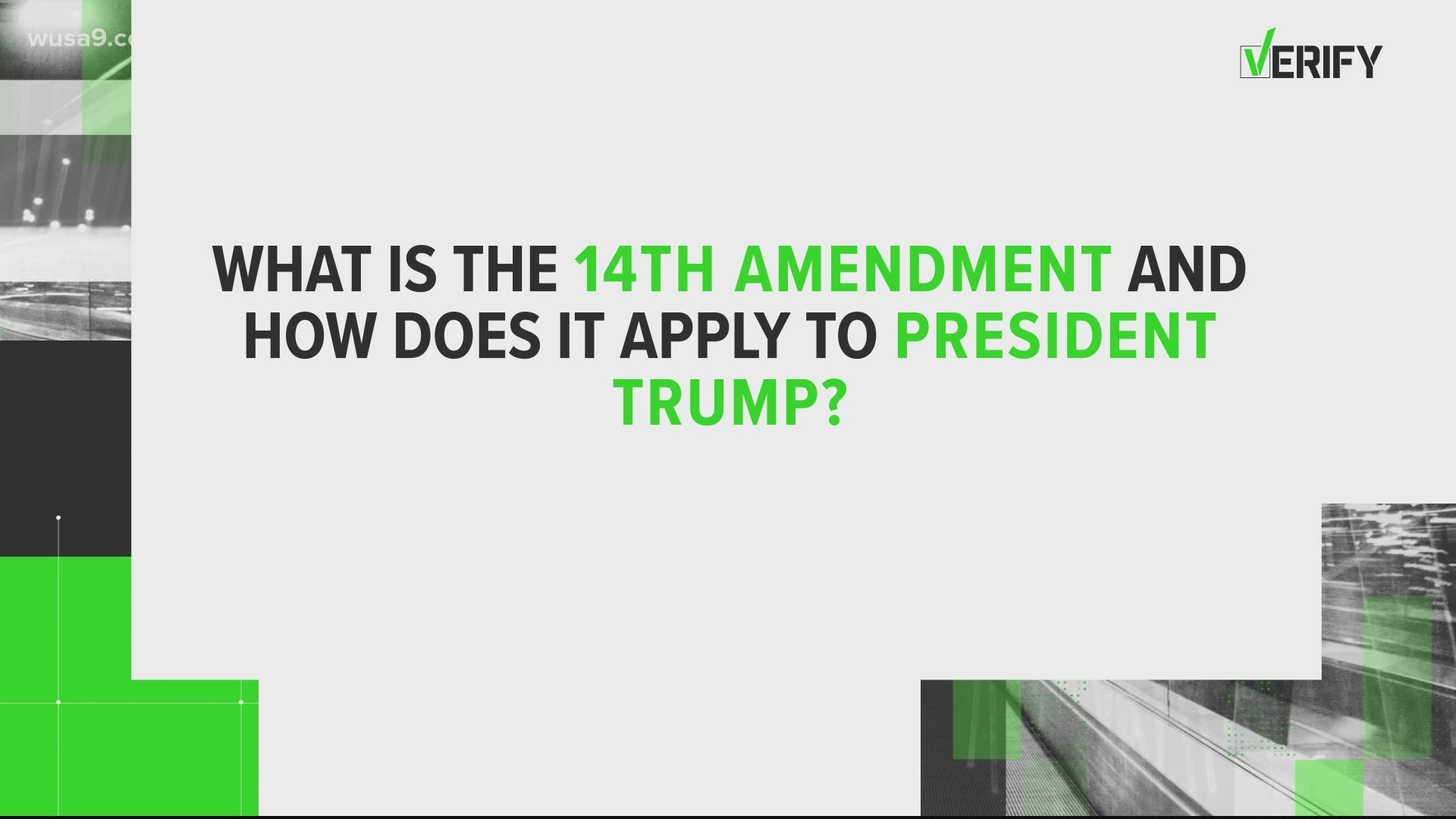 WASHINGTON — As the Senate prepares for a second impeachment trial for President Donald Trump, there is no guarantee that he will be convicted. 17 Republicans would have to join the Democrats to make that happen.

Several members of Congress have looked into a little-known amendment that could exclude President Trump from office: The 14th Amendment.

What is the 14th Amendment and how does it apply to President Trump?

Section Three of the amendment could exclude the president from running for office again.

In the middle of the push for a second impeachment for President Trump, University of Maryland Constitutional Law professor Dr. Mark Graber said he got an interesting call from a member of Congress. They wanted to know about the 14th amendment to The Constitution.

“The reason why I was zeroing in on [the 14th Amendment] is for the last four or five years, I've been writing a book on the forgotten 14th amendment,” Dr. Graber said of why he got the call.

In addition to his book, Dr. Graber has written several articles on the 14th amendment. It’s safe to say he is one of the top experts on it.

“The 14th amendment is the big post-Civil War amendment,” he said. “Section Three is the part we are concerned with. It says, the short version is, anyone who participates in an insurrection is ineligible for state or federal office.”

According to Dr. Graber, there’s no trial just a simple question to Congress:

“It's for Congress to determine whether there was an insurrection and whether somebody participated.”

Both chambers of Congress would then vote to invoke Section Three of the 14th amendment.

Here’s the key: An impeachment conviction requires two-thirds of the Senate would have to vote for conviction. Section Three of the 14th amendment only requires a simple majority vote.

Credit: AP
FILE - In this Wednesday, Jan. 6, 2021 file photo supporters of President Donald Trump are confronted by U.S. Capitol Police officers outside the Senate Chamber inside the Capitol in Washington. Jacob Anthony Chansley, the Arizona man with the painted face and wearing a horned, fur hat, was taken into custody Saturday, Jan. 9, 2021 and charged with counts that include violent entry and disorderly conduct on Capitol grounds. (AP Photo/Manuel Balce Ceneta, file)

That majority is just 51 votes in The Senate.  Then President Trump would be disqualified from ever holding office again.

That’s why a member of Congress called Dr. Graber about this forgotten section of a forgotten amendment.

“It was left there for those of us who play Constitutional Law ‘Trivial Pursuit,’” he said. “Until a week ago.”

RELATED: VERIFY: If a president is impeached, will they lose benefits like security detail and pensions?

RELATED: VERIFY: Here's what the Insurrection Act is and why a president can't 'secretly' invoke it

RELATED: VERIFY: Can a former president be prosecuted for crimes they committed while in office?