VERIFY: Can an apartment force tenants to sign release of liability waivers for COVID-19 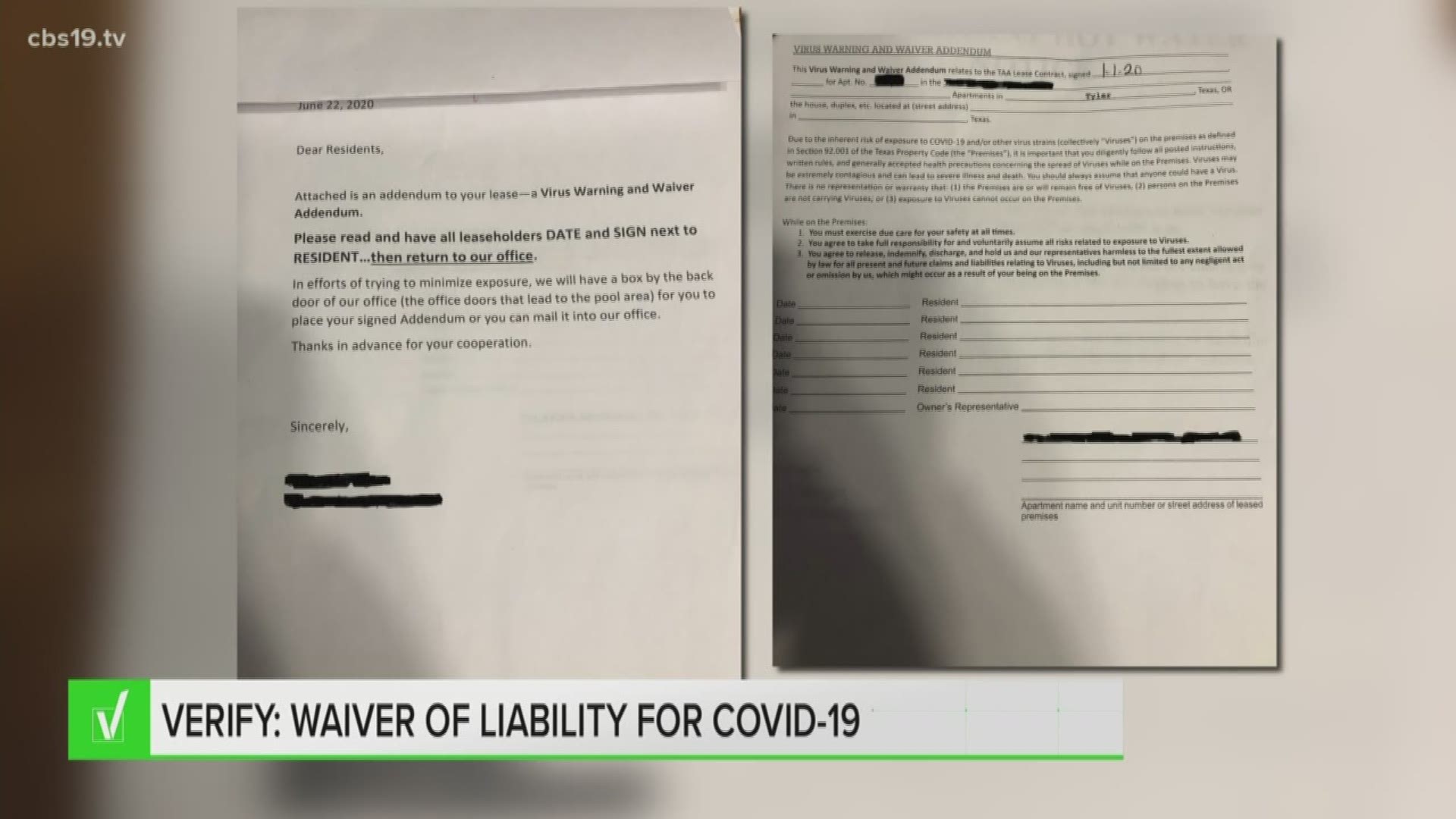 TYLER, Texas — Everyone wants to stay safe during the pandemic. Knowing that it is spreading faster these days, many businesses are taking extra precautions, but some are trying to free themselves from liability in case a customer gets sick.

A viewer from Tyler called the CBS19 Helpline about his apartment complex. Management put letters on doors of each resident, asking them to release the complex from any damages if the tenant gets COVID-19, even if it is due to the complex’s actions or negligence.

So, his question was, “is this legal and do I have to sign it?”

For an answer, we turned to Randy Roberts, a lawyer with decades of experience in liability claims. He said a release of liability like this is fairly common.

“You see it on almost anything you buy these days,” he stated. “If you buy a ticket to a concert or a ticket to a baseball game, somewhere on the back of it is some small print saying you’re releasing everybody of liability.”

Roberts said there are three things a waiver like that must do in order to be enforceable. “First of all, the contract language that releases liability has to be very clear and specific,” he said. “It just can’t be a release of liability for being alive that day.”

The second criteria a waiver must include to be enforceable is that it must be obvious. “That language must be conspicuous,” explained. “It can’t be in fine print on the back of the document.”

The waiver our viewer was asked to sign appears to meet those two criteria. But Roberts said Texas is a “freedom of contract” state, meaning each party is able to enforce a contract against the other, so there is another requirement that Roberts said this waiver does not meet.

“That form is worthless unless they have given you something in return for accepting it,” he claimed. “In other words, paid you to make it part of the contract.”

Since the waiver does not offer anything to the tenant, we can verify that it is not enforceable and the tenant does not have to sign it.

But Roberts added that there is a difference between asking an existing tenant with a long-term lease to sign something like this and asking a brand-new tenant to sign it. “If the tenant and the landlord agree to something in advance, that’s a binding contract,” he said. “But the landlord just can’t come in and change the contract midway through the lease.”

Roberts also mentioned that contracts cannot be enforced against children in Texas, so if the tenant is under the age of 18, the waiver would be invalid, or if a parent does sign it as part of their lease, it would not apply to their kids.