VERIFY: No, protesters did not graffiti the Vietnam Memorial in DC

People on Facebook and Twitter are sharing a photo online saying protesters sprayed graffiti on the Vietnam Memorial Wall in Washington, D.C. It's false. 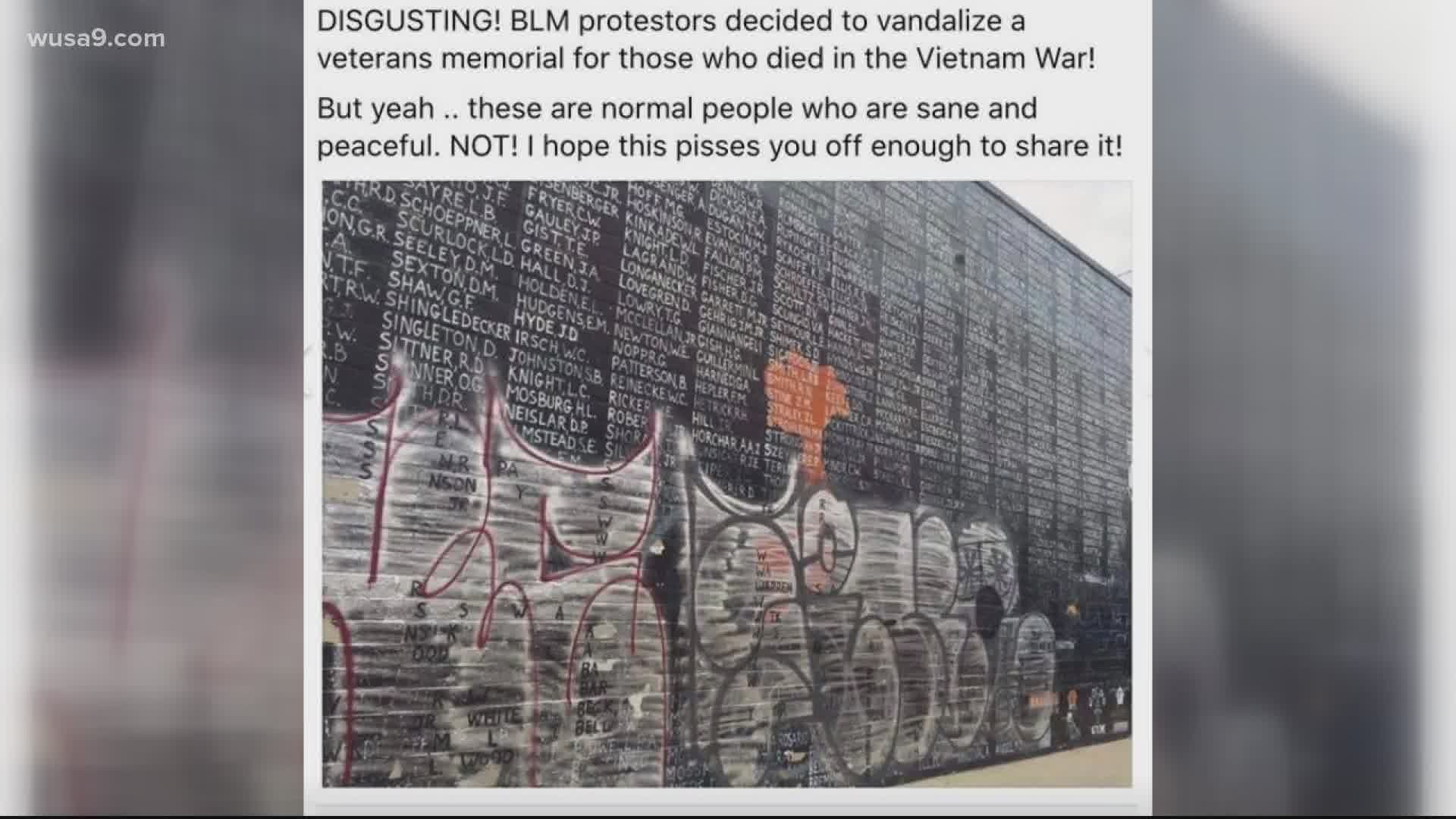 Did protesters vandalize and graffiti the Vietnam Memorial in Washington, D.C.?

People on Facebook and Twitter are sharing a photo online saying protesters sprayed graffiti on the wall of the Vietnam Memorial. Our Verify team reached out to the National Park Service as it manages and maintains several hundred national parks and monuments.

Mike Litterst, the chief of communications for the National Mall and Memorial Parks, said, “There has been no graffiti or vandalism of any kind at the Vietnam Veterans Memorial or on its grounds.”

According to Litterst, "There was vandalism to one of the traveling versions of the wall (not affiliated with the National Park Service) in late April."

The Atlantic Journal-Constitution reported the Jones Creek Vietnam Veteran Memorial wall vandalism in April 2020. You can read more about it here.

RELATED: VERIFY: No, the White House address has not changed to 1600 Black Lives Matter Plaza

In addition, the Associated Press wrote about the vandalism in a May 2016 article which you can read here.

According to the Los Angeles Times, the Vietnam War Memorial in California was vandalized by taggers again in 2017.

"The massive mural on Pacific Avenue, which fills a block-long brick wall, is reminiscent of the Vietnam Veterans Memorial in Washington, D.C.," the LA Times reported.  "On a black background, it bears the names of 2,273 soldiers counted as either prisoners of war or missing in action in Vietnam, as well as the words 'You Are Not Forgotten.' In May 2016, just before Memorial Day, the wall was marred by Angel Castro, a 24-year-old tagger known as 'Liter,' whose moniker was spray-painted in giant white letters on the wall. Castro was sentenced to four years in state prison after pleading no contest to vandalism and robbery. He also was ordered to pay $38,000 restitution."

So, we can Verify social media claims that protesters damaged the Vietnam Veterans Memorial Wall in D.C. are false.

RELATED: VERIFY: No, this photo of a vandalized Lincoln Memorial is not real