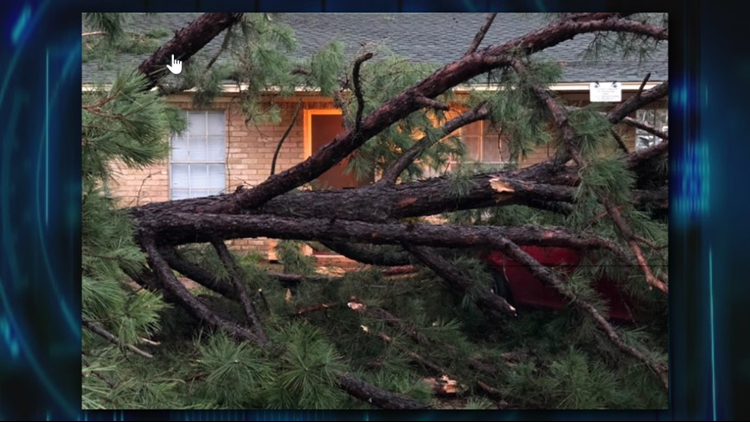 TYLER, Texas — Damaging wind from thunderstorms is much more common than damage from tornadoes.

In fact, many confuse damage produced by straight-line winds and often attribute it to tornadoes.

The National Weather Service has shared a little science to explain the difference and common misconceptions.

The source for damaging winds is well understood and it begins with the downdraft.

As air rises, it will cool to the point of condensation where water vapor forms tiny water droplets, comprising the cumulus cloud we see.

As the air continues to rise further condensation occurs and the cloud grows. Near the center of the updraft, the particle begin to collide and coalescence forming larger droplets. This continues until the rising air can no longer support the ever increasing size of water drops.

Cold air begins to descend from the middle and upper levels of a thunderstorm (falling at speeds of less than 20 miles per hour).

As the colder air strikes the Earth's surface, it begins to "roll" - much like water as a boat moves through it

As the colder air "rolls" out, it is compressed, causing winds to increase dramatically - at times even stronger than tornado winds!

Downbursts are defined as strong winds produced by a downdraft over a horizontal area up to six miles. Downbursts are further subdivided into microbursts and macrobursts.

Below is a very simple diagram of a downburst:

A tornado is a narrow, violently rotating column of air that extends from the base of a thunderstorm to the ground.

Because wind is invisible, it is hard to see a tornado unless it forms a condensation funnel made up of water droplets, dust and debris.

How do tornadoes form?

The truth is that we don't fully understand.

The most destructive and deadly tornadoes occur from supercells, which are rotating thunderstorms with a well-defined radar circulation called a mesocyclone.

Tornado formation is believed to be dictated mainly by things which happen on the storm scale, in and around the mesocyclone.

Below is a simple diagram of a tornado:

The key difference is in two words - IN and OUT!

IN - all wind flows INTO a tornado. Debris is often laying at angles due to the curving of the inflow winds.

OUT - all wind flows OUT from a downburst (straight-line winds). Debris is often laying in straight lines parallel to the outward wind flow.

When extensive damage is noted, the National Weather Service may dispatch a damage survey team to determine the cause and nature of wind damage.

Survey teams look for evidence of a circulation in debris fields to determine if the damage is straight-line winds or a tornado.

Based on the degree of damage and damage indicators, a maximum wind speed is assigned to either straight-line winds or a tornado.

WHY ARE STRAIGHT-LINE WINDS OFTEN MISTAKEN FOR TORNADOES?

Tornado winds range from 40 to more than 300 MPH. Straight-line winds can exceed 165 MPH.

Wind speeds of 75+ MPH will often sound very loud - leading some to believe they heard a tornado when if fact they only heard straight-line winds.

This is one of the most common mistakes - the fact trees were "twisted" off doesn't necessarily mean a tornado has gone through.

If you could draw a line straight down a tree, you'd see the tree isn't exactly alike from one side to the other. Differences in limbs and leaves may cause the tree to have more wind resistance on one side than the other.

If wind speeds are high enough, the tree will begin to tear apart in a twisting motion - even though the winds are relatively straight.

The National Weather Service contributed to this report.