Key moments that defined the COVID-19 pandemic in 2020

The world has dealt with unprecedented challenges as a novel coronavirus spread like wildfire around the globe, making this year a defining time of an era. 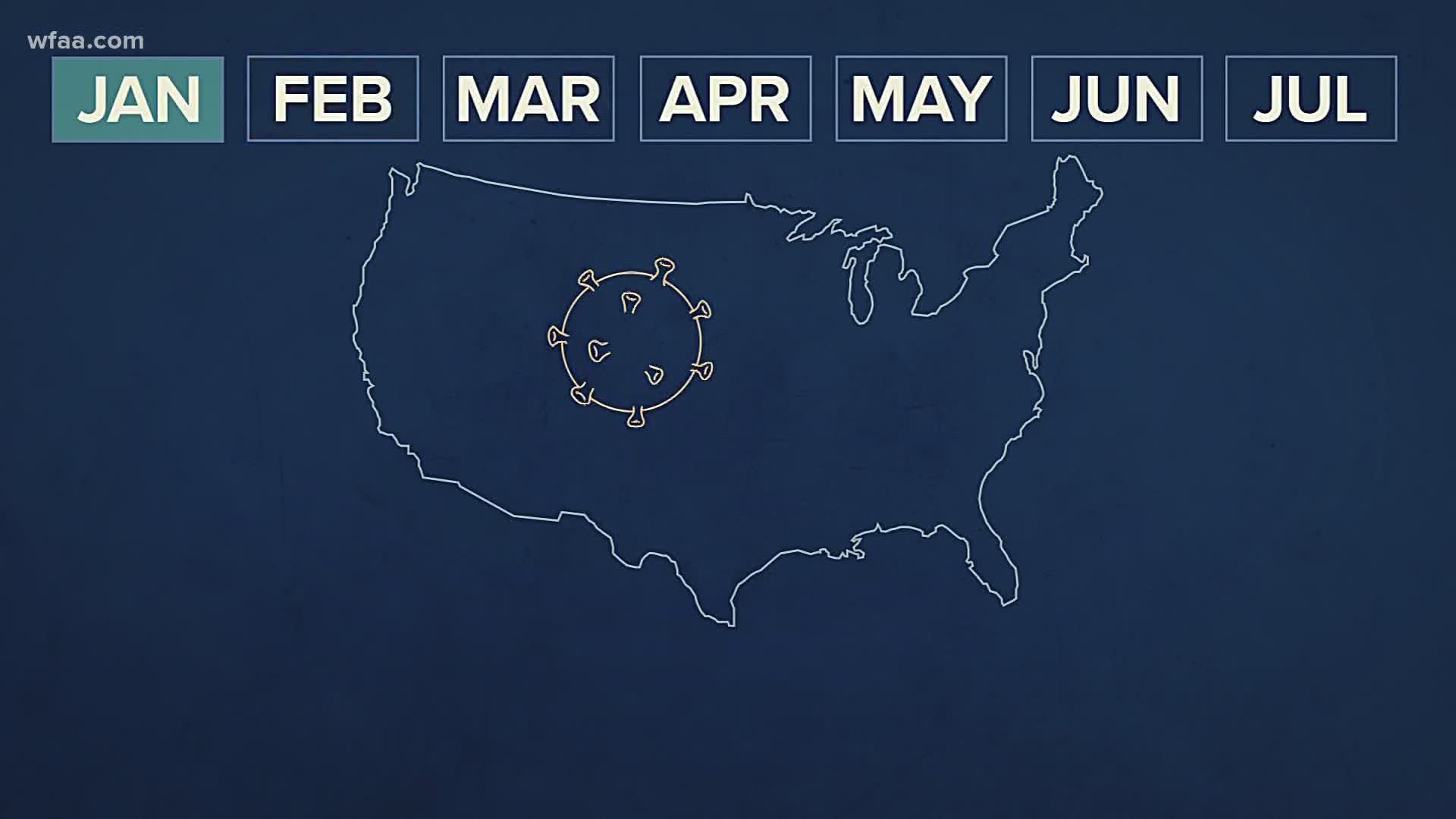 WASHINGTON — The novel coronavirus first knowingly emerged out of Wuhan, China. As the weeks went on, ramped up testing allowed the world to watch as the virus spread across the globe, quickly making 2020 a year that this generation will never forget.

From unprecedented quarantines and lockdowns to an interruption on the global economy not seen in a lifetime, the coronavirus pandemic will no doubt be one event that defines this era. After so many months of COVID-19 fatigue, mitigation efforts to control the spread of the pandemic seem as important as ever. In the weeks just after Thanksgiving, U.S. deaths from the virus surpassed 300,000, according to Johns Hopkins University.

Here's a look back at the defining moments as the country and the world dealt with what would become a global pandemic that blazed across the planet.

With skepticism about how large the problem would become, the World Health Organization acknowledged they were watching as cases of pneumonia-like illnesses started popping up around Wuhan, China. Talk of travel restrictions began to increase around this time, the American Journal of Managed Care notes.

At this point, the coronavirus had already killed at least 4 people and at least 200 more had been infected, scientists in China reported. The confirmation was frightening as it’s the first time person-to-person transmission of the virus was proven. The WHO had still, at this point, not decided on declaring the cases a public health emergency.

The United States announces its first confirmed case of coronavirus

On a cool cloudy Tuesday in Seattle, Washington, as the U.S. waited to hear of the inevitable, news broke that a man in his 30s, just north of the city, tested positive for COVID-19. The CDC announced that it would begin screening passengers for the virus at airports including the world’s busiest, Hartsfield-Jackson in Atlanta along with O’Hare in Chicago, NBC reported. It was decided that flights originating from Wuhan, China would be rerouted to one of five airports in San Francisco, Los Angeles, New York, Atlanta and Chicago for passenger screenings.

China places the city of Wuhan under quarantine

Wuhan, a city of 11 million people, faces immediate and strict lockdown measures with all flights and trains blocked from departing the metropolitan area. With buses, subways and ferries suspended, traveling in and out of the city was nearly impossible.

At this point, more than 9,000 confirmed cases of COVID-19 had emerged worldwide in China and 18 other countries. Secretary of State Mike Pompeo issues a warning telling people not to travel to China.

The United States announced it is under a public health emergency

The Trump administration declares a public health emergency for the U.S. HHS Secretary Alex Azar told reporters during a White House briefing that U.S. citizens would be subject to a mandatory 14-day quarantine if they had traveled to parts of China deemed at risk for contracting the virus.

Air travel is restricted at various places around the globe

Passengers on certain flights from China to the United States faced 2-week home-based quarantine orders once they disembarked. As the New York Times reported at the time, passengers seemed afraid of having to quarantine and were in a rush to avoid being possibly denied entry into the U.S.

COVID-19 deaths in China exceed those of the SARS crisis

At this point, alarm bells ring out loudly across the globe as reports surface that as the novel coronavirus spreads, it had reached a grim milestone within China of having, at that point, caused more deaths in China than the previous severe acute respiratory syndrome (SARS) outbreak.

Twenty-one passengers, almost half of the 46 people aboard a California cruise ship who were tested, returned positive results for COVID-19. The ship was held at sea and not allowed to dock in San Francisco for days. According to the San Francisco Chronicle, a group of 60 passengers filed suit against Carnival Corp. and its Princess cruise line in a federal court in Los Angeles for gross negligence in passenger safety protocols.

After months of meetings and global attention in the media, the World Health Organization finds enough concrete data to begin characterizing the rapid human to human spread of the novel coronavirus as a pandemic. It’s a word many generations hadn’t had to become familiar with in their daily lives until 2020. The spread of the global outbreak of the virus, which had sickened people and caused an alarming amount of deaths in many countries and multiple continents, had been making world headlines for weeks at that point.

President Trump announced that his administration declared COVID-19 as a national emergency. Non-Americans who visited certain European countries faced a travel ban to the United States.

At this point, the Centers for Medicare and Medicaid Services have expanded telehealth rules during the pandemic to protect older patients from exposure. Experimental therapeutics such as the University of Minnesota’s clinical trial for hydroxychloroquine has also started. Then on March 17, President Donald Trump asks Congress to rush emergency relief checks as part of an economic assistance package to help Americans who find themselves out of work. The United States has now reported at least 100 known COVID-19 related deaths.

The World Health Organization reports that evidence has emerged that the novel coronavirus has the ability to transmit between asymptomatic people, in addition to pre-symptomatic spread and transmission from those showing symptoms. Just two days later, over 1 million cases of COVID-19 were confirmed worldwide.

A dramatic rise in COVID-19 cases hits states in the southern U.S.

Florida and South Carolina both break single-day records for virus cases in those states while infection levels in Missouri and the western state of Nevada rise to new high levels. At this point, the U.S. has reported over 30,000 new COVID-19 infections, which is the highest since May. States across multiple regions are experiencing new highs, the New York Times reported.

Dr. Anthony Fauci, Director of the National Institute of Allergy and Infectious Diseases, warned the country of the quickly rising death toll saying that the U.S. was still "knee-deep in the first wave," as he was quoted in the New York Times. Dr. Fauci noted that at that time the U.S. was seeing over 50,000 new cases daily several times that week, calling the situation serious and urging the country to address the issue "immediately."

The U.S. sends a notice of withdrawal from the World Health Organization

Effective July 6, 2021, the U.S. notified the United Nations that it would be requesting to withdrawal from the W.H.O., and with that, the global body would see its largest source of aid withdrawn as well.

President Trump is seen wearing a mask for the first time

During a visit to Walter Reed, the president is seen wearing a mask after repeatedly being urged by aides to do so. The images were helpful in urging Americans to wear face coverings after research increasingly showed that masks helped slow the spread of the coronavirus.

COVID-19 becomes the third-leading cause of death in the U.S.

As the death toll from the coronavirus in the United States hits 170,434, it now becomes the third-leading cause of death in the country behind heart disease and cancer, the American Journal of Managed Care reported. Days later, convalescent plasma is cleared for use by the FDA as a therapeutic while the drug Remdesivir is questioned for its clinical benefits.

Also later in August, the FDA grants an Emergency Use Authorization for Abbott's rapid test for COVID-19.

The first confirmed case of COVID-19 reinfection in the U.S. reported

News surfaces that a 25-year-old male from Nevada was reinfected with COVID-19 in May after having recovered from mild symptoms in April. During the second infection, the man experienced more severe symptoms according to a report published in the Lancet Infectious Disease Journal in October.

Pfizer and BioNTech were set to recruit 30,000 trial participants for phase 3 vaccine clinical trials but expanded that to 44,000 participants. The expansion would foster a more diverse group including young people and those with hepatitis C, HIV or hepatitis B. The vaccine would be two shots given 3 weeks apart, but the vaccine would have to be kept at minus 94 degrees Fahrenheit, which caused worry that distribution would become an issue.

A more contagious strain of the novel coronavirus is discovered

Reports that the coronavirus had the ability to mutate had surfaced but now a study at Houston Methodist Hospital found that a more contagious strain of COVID-19 had been discovered.

Into the second wave

As some models showed that the U.S. would hit its second wave of infections by mid-September, according to healthdate.org, new infections were still rising at alarming rates. Johns Hopkins University issued guidance on how to prepare for a spike or a second wave. The precautions held consistent, with experts urging Americans to continue to social distance, wear a mask and wash hands frequently.

Worldwide confirmed deaths from the novel coronavirus surpass 1 million, setting a grim milestone. At this point, cases of COVID-19 have risen higher than that of H.I.V., dysentery, malaria, influenza, cholera and measles, the New York Times reported.

President Trump was said to be experiencing mild symptoms as doctors admitted him into Walter Reed out of "an abundance of caution," White House press secretary Kayleigh McEnany said in a statement.

President Trump leaves Walter Reed in a dramatic return to the White House full of photo ops and with the world's media watching as a crowd of supporters remained gathered in front of the medical center. The president would continue to receive leading treatments, not usually available to the general public, to control his symptoms and to make sure his oxygen levels remained normal, according to his team of doctors.

After a Rose Garden ceremony for then-Supreme Court nominee Amy Coney Barret, at least 34 confirmed COVID-19 cases are contract traced and found to be connected to that event. As the Washington Post reported, White House staffers were included on that list.

With the results of the expanded phase 3 trial in, and after nearly 44,000 trial participants have completed their participation in the trial, reports surfaced that the vaccines are found to be 95% effective. This would put the vaccine in line with the efficacy levels of those for shingles and measles, the American Journal of Managed Care reported. The next step would be to seek FDA approval immediately so that distribution can begin to take place.

As the U.S. surpasses 300,000 deaths from COVID-19, the nation's historic vaccination campaign begins

The nation watched live on television as some of the first non-trial recipients of the newly approved COVID-19 vaccine received their first doses in the U.S. First responders, including critical care nurses, were the first to be vaccinated.

The U.S. added a second COVID-19 vaccine to its arsenal, boosting efforts to beat back an outbreak so dire that the nation is regularly recording more than 3,000 deaths a day.

Much-needed doses are set to arrive Monday after the Food and Drug Administration authorized an emergency rollout of the vaccine developed by Moderna Inc. and the National Institutes of Health.

As critical care workers and those in high need areas were receiving the vaccine, the rest of the country, including the incarcerated population, waited to be vaccinated with hopes on Wall Street and Capitol Hill that the pandemic would be over in 2021 and some possible much needed economic assistance would come out of Washington.

RELATED: CDC to use text message tool to track COVID-19 vaccine side effects 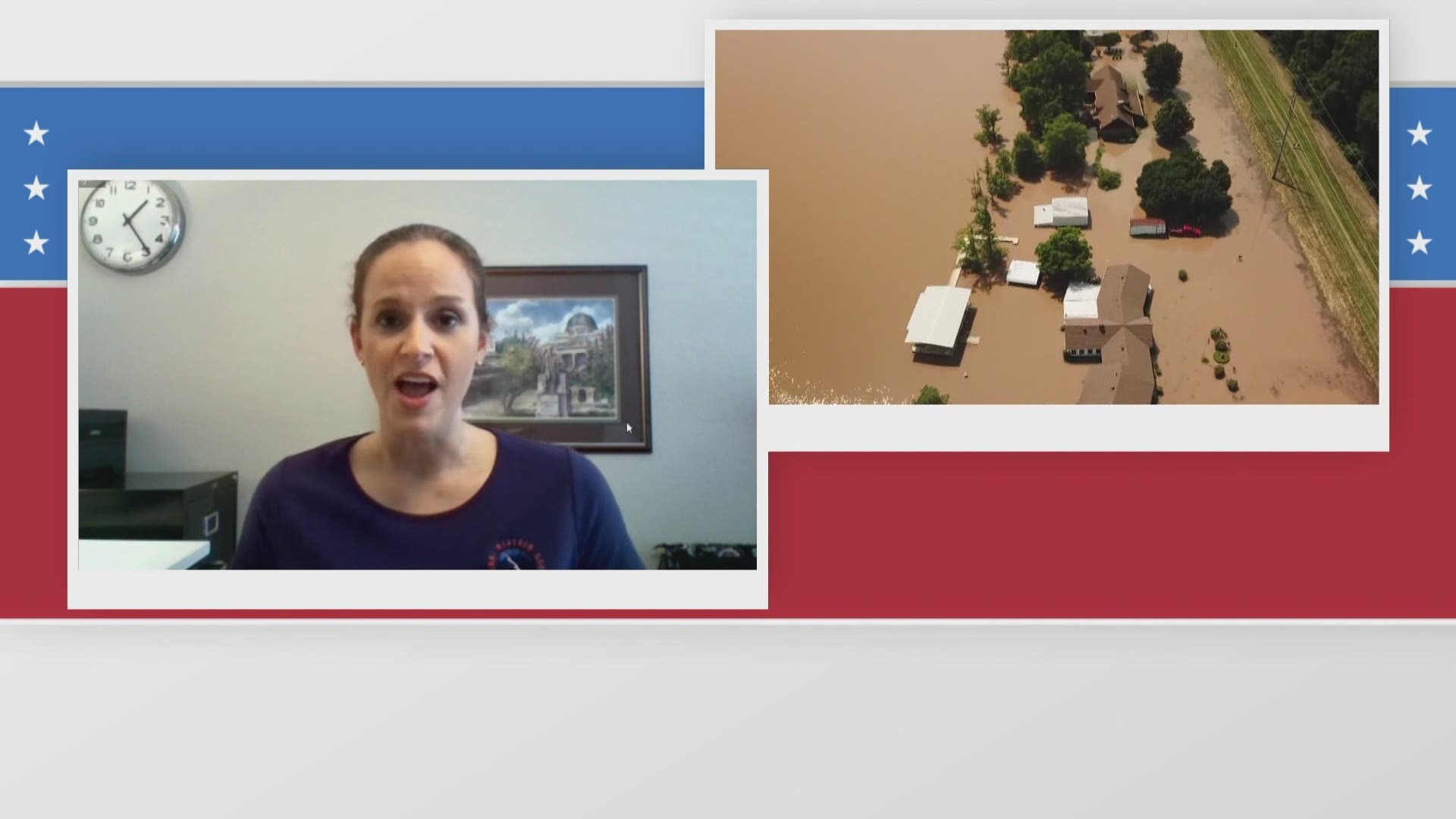