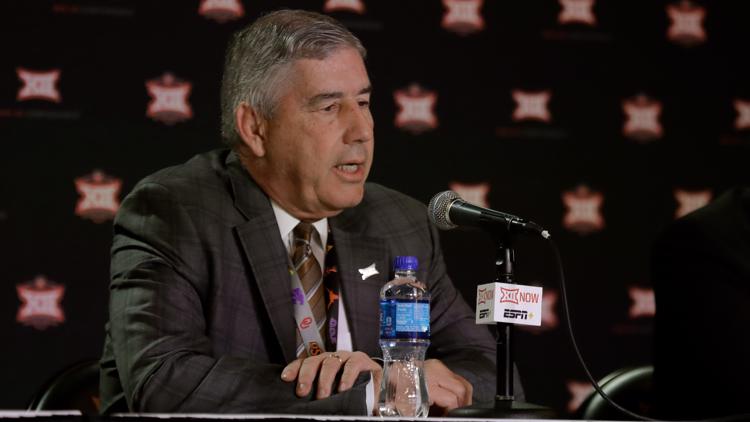 Photo by: AP
Big 12 commissioner Bob Bowlsby talks to the media after canceling the remaining NCAA college basketball games in the Big 12 Conference tournament due to concerns about the coronavirus Thursday, March 12, 2020, in Kansas City, Mo. The biggest conferences in college sports all canceled their basketball tournaments because of the new coronavirus, seemingly putting the NCAA Tournament in doubt. (AP Photo/Charlie Riedel)

WACO, Texas — Big 12 commissioner Bob Bowlsby acknowledged on Thursday the possibility that the upcoming college football season could be played in empty stadiums.

Bowlsby said the league hasn't done anything with forming contingency plans if the Coronavirus ends up disrupting the 2020 football season.

"It's a whole new ballgame if we find ourselves not playing football because it affects everything we do," Bowlsby said. "It affects the largest portion of our TV contract, our largest source of campus revenue, which is live gate."

Bowlsby reiterated several times during the conference call that it is simply too soon to begin planning one way or the other.

"We're two weeks into this and people tell us it's six to eight (more weeks). Some say it's 10 to 12 (more weeks),. Some say we're gonna get a rebound," Bowlsby said. "I just don’t think there’s a lot of credibility in anything other than putting together very rudimentary plans."

The conference lost $6.6 million by canceling the Big 12 men's and women's basketball tournaments. Add another $10 million by losing the NCAA Tournament. They lost roughly $16 million in total.

While basketball is now in the rearview mirror, it's football season, which has a lot of people nervous.

"Our plan is to play our football season as it's scheduled," Bowlsby said. "If we find out that we have to depart from that, then we will do so."

In the scenario of a shortened season, Bowlsby said any change to the number of games would likely involve collaboration among many conferences.

In what’s become almost a foregone conclusion, Bowlsby said he doesn’t foresee any more spring football practices or spring games taking place this year. He said the decision to cancel, however, is up to individual schools.

Bowlsby knows that not having a spring game is tough for the players and fans, but not as significant as what is happening around us.

Price gouging should be reported to Attorney General, not police