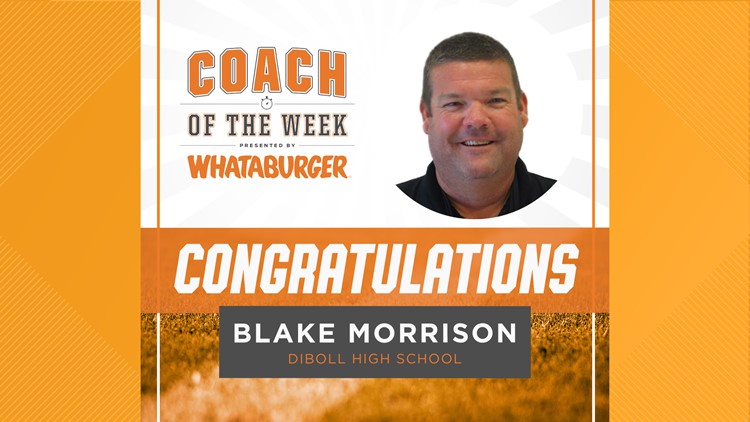 DIBOLL, Texas — Rarely does success happen overnight. Most success comes after hours of work and dedication towards a certain goal. The road to success is a journey filled with ups, downs, twists and turns.

The Diboll Lumberjacks take this seriously. Thanks to their dedication to hard work, along with the leadership of Blake Morrison, the Lumberjacks are 7-0.

"It's just been a lot of hard work," Morrison said. "It's not so much that we teach our kids X's and O's. We teach them, basically these boys, of how to be men and grow up."

Morrison says without his team's growth off the field, it would be very hard for them to celebrate a possible undefeated regular season.

"Learn [little] things of character, integrity, and there is no such thing as entitlement," Morrison explained. "We've worked on those things, and X's and O's take care of itself."

Morrison is in his sixth season as the head coach of Diboll. So far, his team made four playoff appearances and scored their first postseason victory since 2000.

"Every year, we talked about 'raise the bar.' You know, we come in here and we work every day," Morrison said. "It started with a bunch of guys, you know, trying to learn things, trying to teach them the good and the bad and the hard and easy. And once we finished, once we got through that first year, we started, you know, we though we turned it around a little bit."

Since that first year, they have been steadily improving, though there have been bumps along the way.

In the 2017 playoffs, Diboll suffered a 28-15 loss against Gilmer. Morrison says this loss sticks out as a turning point in his career and the teams trajectory.

"We just needed somebody, one group, to step up. And they played hard, and we played with a bunch of freshmen, sophomores and some great senior leaders," Morrison remembered. "We took that groups and started building. And here we are today."

While that is impressive, Morrison wants his team to keep one simple goal in mind:

"We just want to win the last game. That's it.“