The Mavericks haven't had fans at a game since the 2020 season was put on pause in March. 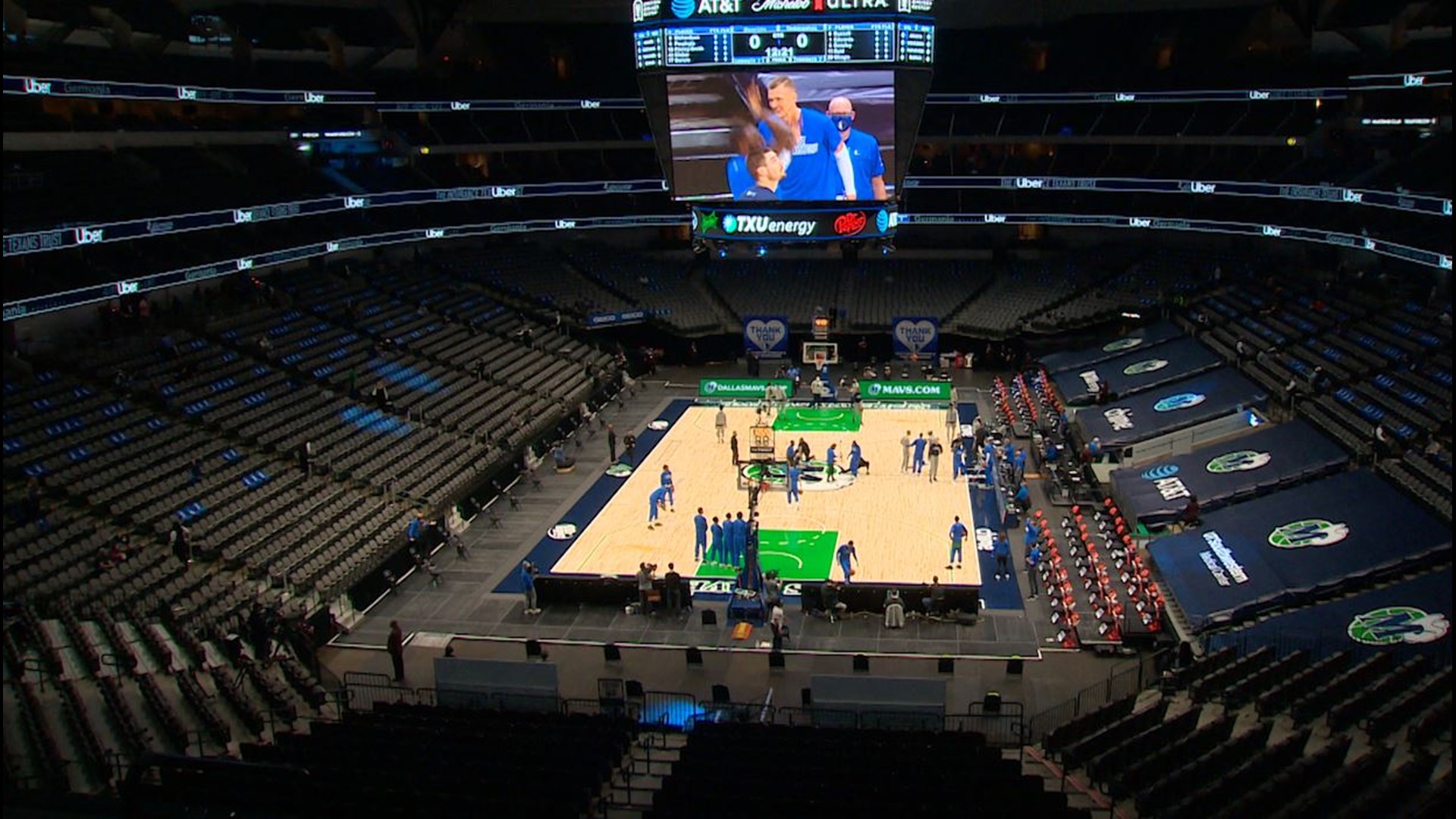 DALLAS — The last time the Dallas Mavericks had fans inside the American Airlines Center for a game, there were 18 total COID-19 cases reported in Texas.

For the first time in nearly a year, the Mavs invited frontline workers serving in healthcare and food service, and first responders, including police and firefighters, to come see a game.

“I’m super excited. I love to watch the Mavs,” said Jeannie Cook, a nurse attending the game. “I work around COVID patients, so I’m used to it. I feel safe.”

“I miss it. I miss being at any type of live sport game,” said Diego Contreras, a Dallas ISD teacher. “I’m just so excited to be back in it.”

The 1,500 essential workers invited back for the Mavericks' game against the Minnesota Timberwolves were all invited for free. The team will bring 1,500 back again on Wednesday. The Mavs haven’t shared attendance for Friday’s and Saturday’s games, which will also be limited to frontline workers who have received at least one dose of the COVID-19 vaccine.

“I think it’s a really grand gesture that they’re doing to thank everybody,” said Christie Munoz, a nurse attending Monday.

Many of the spaced-out seats were still open at tipoff.

“It’s hard to believe it’s been almost 11 months since the hiatus and so much has happened,” Mavericks Head Coach Rick Carlisle said.

Carlisle said even with just a handful of fans back, it’s a step towards normal.

“It’s great to honor these folks that have been courageous and have been doing such important work on the frontlines for so many months,” he said.

“We owe so much to people who have put their lives at risk to make us safer,” Mavs owner Mark Cuban said in a statement. “Bringing them to a Mavs game is the least we can do!”

“The Mavs and Mavs Foundation have been committed to supporting our essential workers through PPE and donated meals over the past year, and this is just another way we can say 'thank you' for serving us day in and day out. Hopefully, this will be a much-needed break from very hectic and tumultuous schedules,” said Dallas Mavericks CEO Cynthia Marshall in a statement.

The Dallas Stars, who share the American Airlines Center, have been allowing in 5,000 fans for games this season. The Dallas Cowboys averaged more than 28,000 fans at games this season, according to ESPN. Globe Life Field opened to fans for MLB playoffs and the World Series.

Fans attending the Mavericks game had to fill out a health survey and wear masks while inside.

Meenakshi Ramanathan is an infectious disease pharmacist at UNTHSC and says vaccines are part of a combined approach to stopping the spread along with masks and distancing.

“There is a big difference in whether you receive one dose or two doses,” she said.

While the current vaccines stop symptoms, she says it’s not a ticket to do anything.

RELATED: Thousands of Texans are overdue for second vaccine doses, and the problem is expected to worsen

“They’re still trying to figure that component out if it actually reduces transmission from person to person,” Ramanathan said.

The year without fans has been especially long for those on the frontlines.

“Feels like forever,” Cook said “We were just talking on the way over here. We didn’t get to go to any Christmas parties, anywhere basically.”

Monday was a taste of what normal looks and sounds like for now.