The Longhorns stayed focused in their first trip outside of the state of Texas this season and showed they were not looking ahead to next week's Red River Rivalry.
Author: John Raby (AP Sports Writer)
Published: 6:57 PM CDT October 5, 2019
Updated: 9:26 AM CDT October 6, 2019

The Longhorns had plenty of motivation for this one. Ehlinger and several Texas players were upset last year after several Mountaineers flashed "horns down" signs during West Virginia's 42-41 win in Austin, Texas. Ehlinger noted in a tweet that was later deleted: "Do not think it will be forgotten."

Ehlinger finished 18 of 33 for 211 yards. He threw just his second interception of the season that West Virginia turned into a third-quarter field goal.

Can you beat the KVUE Sports team in a Texas Longhorns pick 'em? Submit your predictions here.

The Texas defense showed no signs of slowing down despite injuries that have decimated the secondary. The Longhorns intercepted Austin Kendall four times, twice by cornerback D'Shawn Jamison.

Texas needed those turnovers to break open a close game, too.

Kendall was intercepted on the next drive by Jamison at the West Virginia 18, and Ehlinger threw a lateral to offensive lineman Samuel Cosmi, who rumbled 12 yards into the end zone for a 35-17 lead.

Kendall threw three TD passes, including pair of fourth-quarter scores, and had a 1-yard scoring run. He finished 31 of 46 for a career-high 367 yards.

RELATED: Texas had a bye week, then plays West Virginia. Here's how the Longhorns fare in post-bye week games.

Ricky Williams’ 1998 Heisman Trophy up for sale at auction

Texas: The Longhorns stayed focused in their first trip outside of the state of Texas this season and showed they were not looking ahead to next week's Red River Rivalry game against No. 6 Oklahoma.

West Virginia: The Mountaineers started a brutal October stretch with a bust. They also have Iowa State, No. 6 Oklahoma and Baylor on the schedule this month.

Texas could creep back into the top 10 with the road win.

Texas: The Longhorns play the Sooners next Saturday in Dallas. Texas beat the Sooners 48-45 during the 2018 regular season at the State Fair of Texas, though the Sooners won the rematch in the Big 12 title game. 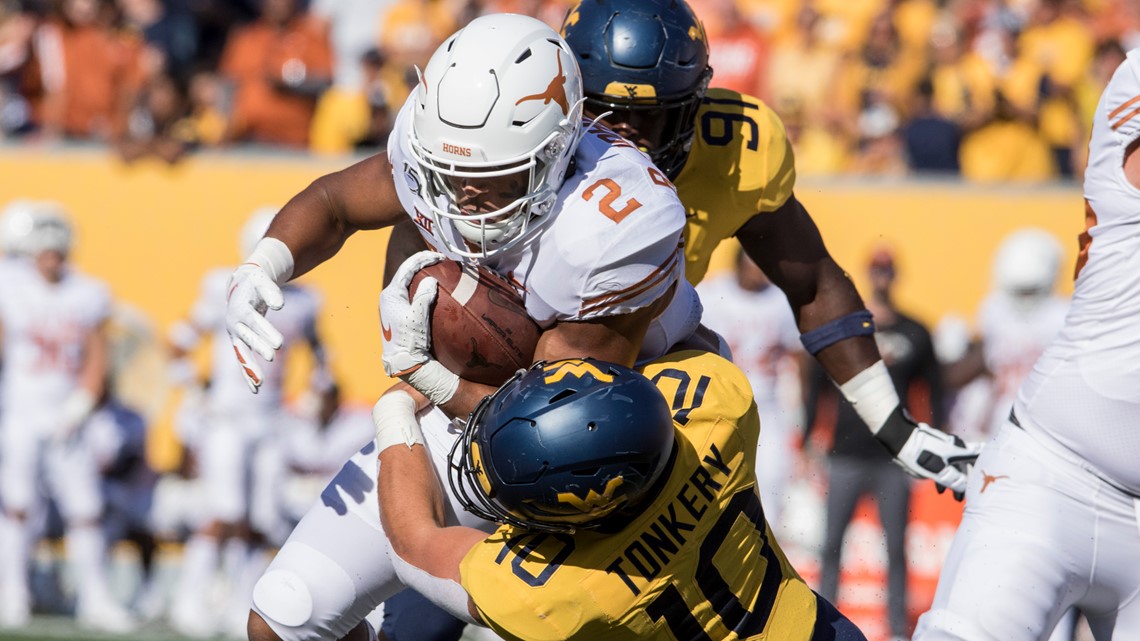