Here's what Tom Herman said in his Monday press conference ahead of the highly-anticipated Red River Showdown matchup versus the Oklahoma Sooners. 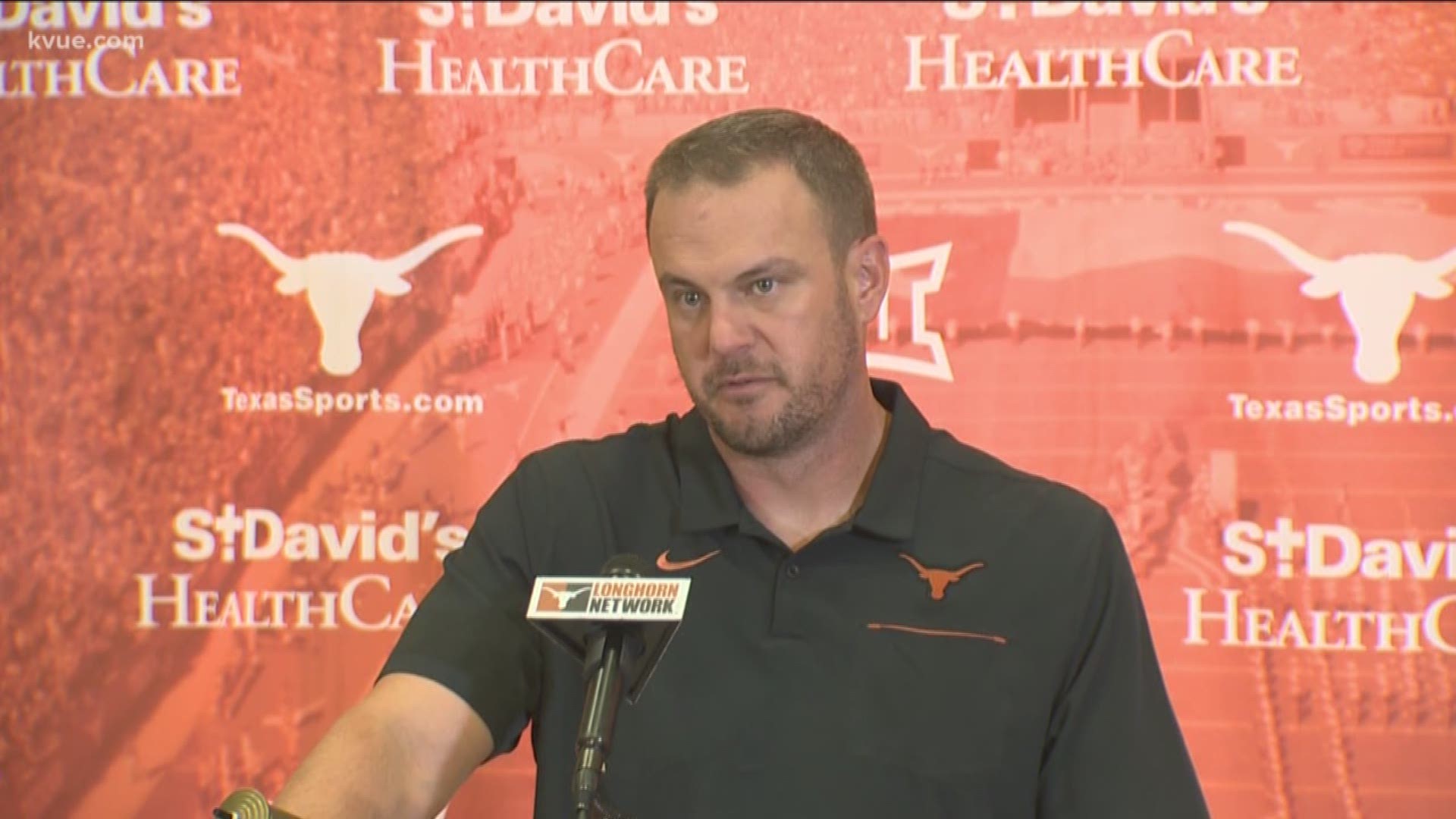 AUSTIN, Texas — Here it is: the Red River Showdown.

This is the game everyone in Austin has circled on their schedule year-to-year. Texas defeated Oklahoma in the Red River Showdown last season, 48-45, after local Austin product from Lake Travis High School Cameron Dicker nailed a 40-yard field goal with nine seconds left.

Ehlinger returns for another tango with the Sooners in the Cotton Bowl, but will headline against a different Sooner starting quarterback. Jalen Hurts transferred from Alabama to Oklahoma and has been lighting up the stat sheet so far this season. If recent history is any indication, everyone is in for a treat at the State Fair – and no not those yummy, fried ones they're selling at the concessions stands.

RELATED: HIGHLIGHTS: No. 14 Texas Longhorns fall to No. 5 Oklahoma Sooners 39-27 in Big 12 Championship

HIGHLIGHTS: No. 14 Texas Longhorns fall to No. 5 Oklahoma Sooners 39-27 in Big 12 Championship

Tom Herman addressed the media on Monday before Saturday's highly anticipated matchup. Here's what he had to say:

Tom Herman opening statement: "Obviously excited to get a big road win. As I said post game, great environment. West Virginia's got a lot to be proud of in terms of their fan support. Coach Brown has them headed in the right direction. This week speaks for itself. We're extremely excited to start preparing. We'll be burning the midnight oil tonight to try and find a way to score some points and hopefully hold (Oklahoma) to something reasonable with that offense they have. Injury update: Cade Brewer is progressing and will progress into practice. He did not have a concussion. Chris Brown with his thigh contusion will progress into practice tomorrow. DeMarvion Overshown is kind of the highlight. He ran really well yesterday. We plan to practice him barring any setbacks on Tuesday. He looks like – again barring any setbacks – that he'll be available this week. Jordan Whittington is doubt, but progressing. Having him this week was maybe a bit of a pipe dream, but he has not had setbacks. Excited to get him back soon. Then, Collin Johnson practiced full yesterday. So, barring any setbacks, we plan on playing him as well.

Herman on Oklahoma's rushing offense: "Not a whole lot different ... obvioiusly they're going to hang their hat on the counter trey play ... inside zone ... it's what they do. It's what they've been doing since Coach Riley got there. I think the only difference is the designed quarterback runs. Jalen Hurts is a different animal back there in terms of the style of run game. Obviously Kyler is a dynamic runner, but was just used a bit differently. A ton of respect for how adaptable that offense is, but they're going to hang their hat on counter trey, zone, and now the added element of some quarterback runs."

Herman on Hurts' open running lanes in previous games: "Well, yeah. You have to guard CeeDee Lamb and Charleston Rambo and Theo Wease and all those guys. So. (Hurts) scrambles are the ones you seem him get the most open space on because it's a pass and you better go cover those guys. So, that leaves some pretty big voids in the field."

Herman on his thoughts of the Red River Showdown hype: "There was some public opinion that having the (Big 12) Championship game being in Dallas, as well, it would diminish the mystique of the Red River Showdown .. and it hasn't in my opinion.  It is one of, if not the greatest games in college football. I've been part of some pretty cool rivalries – Battle of the Piney Woods (Stephen F. Austin vs. Sam Houston State) is a big one. You guys chuckle, but they hate each other. Iowa-Iowa State for three years, is another one. Then, obviously Michigan-Ohio State for three years. It's been pretty cool to be a part of all of those, but this one takes the cake because of it being an interstate rivalry. The two states, in general, don't get along with each other. Then, to have the game at such a historic venue during the Texas State Fair. I think it's cool that it's always on our soil. Everything that surrounds the game makes it one of if not the best game in college football."

Herman on preparing for Oklahoma compared to years past: "Little bit different on both sides of the ball because of the new defensive staff ... their offense does such a good job from year to year of adapting itself to its personnel strengths. They have some new lineman, a new quarterback with a different skill set and they haven't missed a beat. I think our defense can lean a little bit on our last couple of meetings – just from a 'hey, who are these people philosophically' standpoint. But in terms of the schemes and formations and people they have doing them, they're quite a bit different this year.

Herman on Lincoln Riley and what he respects about him as a coach: "His creativity, offensively ... his ability to stay so involved in the offense and yet tackle the requirements of being a head coach of a premiere program. But I do know that before we became rivals, we used to talk a lot of shop and talk football. We share similar philosophies in offensive football, for sure."

Herman on trick plays called in the past few games: "We're just trying to score touchdowns. Touchdowns are hard to score — especially in the red zone. It was a fortunate series of events where the ball was on the correct hash, the correct area of the red zone where we'd want to call it. What gets lost in the game of football is how difficult it is to score in the red zone when the field is that compressed. There is going to be two extra hats at the line of scrimmage in the run game and when you're throwing the football, you only have to defend a few yards. Any trick you can find up your sleeve to gain an advantage ... we're going to pull out all the stops to score touchdowns down there.

Herman on his first memory of the Red River Showdown: "Um... my first memory of the rivalry was as a GA, riding through the State Fair – I think I've told this story – and I'm looking out the window and seeing this elderly lady who had to have been at least 80 years old going 'double bird' to the Texas bus. And right next to her was this boy who had to be eight years old also going 'double bird' to the Texas bus. It speaks to the intensity of the rivalry that it crosses a lot of generations.

***A reporter got a phone call at podium during a question***

Herman: "Somebody is getting a call, is that important? Should I answer it? *answers phone* This is Coach Herman. Hello? I'm doing good, whoever you're calling, can he call you back? He hung up on me."

Herman on managing "one week at a time" mantra: "The biggest thing is in your practice preparation. We have now for two years studied our work loads, our energy output. It's through the roof during this week and it was the LSU week. These guys are going to practice really, really hard. So we've got to be cognizant as a staff that we want to get our work in, but we don't want to wear them down. We want to be fresh. 11 a.m. is pretty early, as well.

Herman on importance of defensive pressure on Hurts: "We talked about that at length yesterday with the defensive staff. We didn't sack West Virginia even one time. It wasn't concerning because we did disrupt them quite a bit. I think we got two critical PBU's (pass break ups) by D-lineman on third down. We did press the pocket. It needs to be a big part of our game plan to make him feel uncomfortable. The number of sacks isn’t indicative of how the front affects the quarterback.”

“I think we’ve done an admirable job in all three games even in ’17 when we weren’t real good. You’re not going to shut Oklahoma out. This is not going to be a 10-7 ball game. We know they’re going to make plays. They're extremely explosive, offensively. They’re only averaging eight third down attempts a game and averaging 9.9 yards a per play. We’ve got to limit those big plays. We’ve got to move it to third down ... and we’ve got to get turnovers. We’ve been very successful when we’ve won the turnover battle.”

“He was not feeling right in the LSU game and probably our best guess … the stretched out catch against Louisiana Tech probably started something. We thought it was going to be really minor and then for Oklahoma State there was a setback Sunday. We knew we had the off week to let it heal.”

Herman on OU’s defense and improvement:

“They are really flying to the football. Not extremely complex in terms of coverage structure, but they’re in the right place. Not very many busts, not turning guys loose. The multiplicity of their defensive front, which is difficult on their offensive line. That will be a huge point of emphasis for our offensive line to handle them up front and in the run game we’ve got to do a good job with our down field blocks.”

“My admiration, affection, love for Sam Ehlinger is hopefully well-documented. I love him like a son. He’s mature enough to know when it’s time to have fun and when it’s ‘yes sir and no sir’. We’ve grown to trust each other quite a bit. We knew all the intangibles were there as a freshman but to see him develop into the quarterback that he has…it’s a testament to Tim Beck and I know Sam would credit him with a lot of his improvement. It can’t be overstated with three years…there’s a level of comfort. He knows the strengths and he knows the weaknesses. Right now, he knows he knows and he’s playing with a ton of confidence.”

“I made a point yesterday I pulled him aside before practice. I looked him in the eye and told him how proud of him I was. It’s an awesome story for all the things that he’s gone through. 99% of us would’ve said enough’s enough but he didn’t. He loves the game, he loves his teammates…just a really, really special story.”