The century-old rivalry ranks among the greatest in collegiate sports. It's history: refined and prestigious played at the illustrious Cotton Bowl during the Texas State Fair. The rivalry encompasses an interstate hatred between fan bases, spanning generations.

Texas hates Oklahoma and Oklahoma hates Texas. There is no other way to put it.

The intensity of the rivalry is illustrated in Texas head coach Tom Herman's first memory of the game. In a press conference on Monday, Herman told reporters his first memory depicting the sheer intensity of UT versus OU was as a grad assistant. He said he remembered looking out the window of the Texas bus to see an 80-year-old woman and an 8-year-old boy both giving him the double bird.

Yes, you read that right. Herman was flipped off by an 80-year-old lady and a child. He also said trotting out of the tunnel into the stadium is not the friendliest place, either. Fans look up the most personal things about you and shout ill-mannered remarks at you about your mother, girlfriend, etc., according to Herman.

So, how did we get to this point? Where did this intense rivalry stem from?

Texas and Oklahoma played in Austin and Norman until 1912, then the game was moved to Dallas. The series ended between the Longhorns and Sooners in 1923. In 1929, the rivalry was renewed and scheduled to be played annually during the Texas State Fair at an old wooden structure called Fair Park Stadium. A new structure was built in time for the 1930 season, also called Fair Park Stadium, but would later be named "The Cotton Bowl" in 1936. The first Texas-Oklahoma game played at "The Cotton Bowl" was in 1937.

Saturday will mark the 92nd time the game has been played at the neutral site in Dallas. Texas leads the all-time series 62-47-5.

The Texas-Oklahoma game has been known by a multitude of names throughout its history. Older generations of fans will recall and refer this as the Red River Shootout. In 2005, the game was sponsored by SBC Communications and the name was changed to SBC Red River Rivalry, replacing the word "shootout" out of a desire not to convey an attitude of condoning gun violence. One year later, SBC merged with AT&T, changing the game's name to AT&T Red River Rivalry. Finally in 2014, the game's name was changed again to the AT&T Red River Showdown.

With any rivalry series more than 100 years old, there are sure to be some traditions made along the way.

For the AT&T Red River Showdown, there are five "official" traditions throughout the festivities of the day.

First, and the most obvious, is that the game is played annually at the Cotton Bowl during the Texas State Fair. Texas and Oklahoma fans alike will make the trek from Austin and Norman to enjoy fried food, rides and attractions, take pictures with Big Tex, and attend the UT-OU game.

A general view of Big Tex at the State Fair of Texas in Dallas prior to the Red River showdown with the Texas Longhorns playing against the Oklahoma Sooners at the Cotton Bowl.

Second, we have "The Battle Line." It's one of the most unique characteristics of any college football rivalry. Tickets are divided equally between the Longhorns and Sooners and the stadium is split in half at the 50-yard line, making a clear division of a crimson side of the stadium and a burnt orange side.

DALLAS - OCTOBER 11: A general view of the Oklahoma Sooners and the Texas Longhorns during the Red River Rivalry at the Cotton Bowl on October 11, 2008 in Dallas, Texas. (Photo by Ronald Martinez/Getty Images)

For Texas, a third tradition during the Oklahoma game week is the Texas Fight Rally, which takes place at the Main Mall on UT's campus. The head coach, players, students, and fans gather for a night of cheering on the team before the game.

Here is a look at the Texas Fight Rally from 2019:

Now, the final two traditions are ones fans might be more familiar with. Following the game, there are two "trophies" exchanged by Oklahoma and Texas. First is the famous "Golden Hat" trophy, which is won and displayed by the winning football team. The gold cowboy hat is mounted on a large block of wood and has been part of the rivalry since the State Fair donated it in 1941. Originally, it used to be made out of bronze and was known as "The Bronze Hat," until it was reworked in the 1970s and came out gold, warranting the name change to the "Golden Hat."

Senior wide receiver John Burt is poised to be the only Texas player on record to play against Oklahoma six times in a career. Burt played in both games of the 2018 season, but redshirted for the year after only appearing in four total games. Burt also played against Oklahoma each season from 2015-2017. Several players in UT's history have played OU five times. According to Texas Athletics, there aren’t records to confirm participation in all six games, but the only Longhorn that would have likely played against the Sooners six times is Rembert Watson from 1901-04.

Texas may hold the all-time series lead at 62-47-5, but the past two decades have been owned by Oklahoma. The Sooners have won 12 of the last 19 meetings, dating back to 2000.

In recent history, every game has been a nail-biter, too. Five of the last six matchups have been won by one possession (seven points or less).

Texas was No. 1 in the nation and Oklahoma was No. 2. Also, Mack Brown was a Sooner in this game, oddly. Brown served as Oklahoma's offensive coordinator at the time.

Oklahoma was down 10-0 at halftime, but came back with two touchdowns by running back Steve Sewell. It seemed as if the Sooners were poised to win, ahead 15-12 with just 10 seconds on the clock. Then, Texas quarterback Todd Dodge – who now is the head coach for Westlake High School – hailed a pass into the end zone, only to be intercepted by Oklahoma. However, officials called the pass incomplete. This controversial call angered Sooners fans, and Texas ended up kicking a field goal with five seconds remaining.

"The interception should have never been in question," Dodge told KVUE. "It was a big-time pass interference before it ever happened."

The game ended in a tie because there was no overtime rules in 1984.

"Pretty empty feeling," Dodge said. "In our locker room, there was no feeling of victory, really."

For the first time, overtime was a part of college football and it came just in time because the Red River Shootout needed it.

Sooners running back James Allen helped lead an OU comeback in the last 10 minutes of the game. Jeremy Alexandar kicked a 44-yard field goal to tie the game at 24 a piece.

In overtime, Texas Longhorns kicker Phil Dawson put Texas ahead 27-24. However, Oklahoma answered with a two-yard Allen touchdown run for the win.

This game was a blowout. Oklahoma won 63-14. But that's not the interesting part. It is one of the most memorable Red River Showdown games because of Oklahoma running back Quentin Griffin. 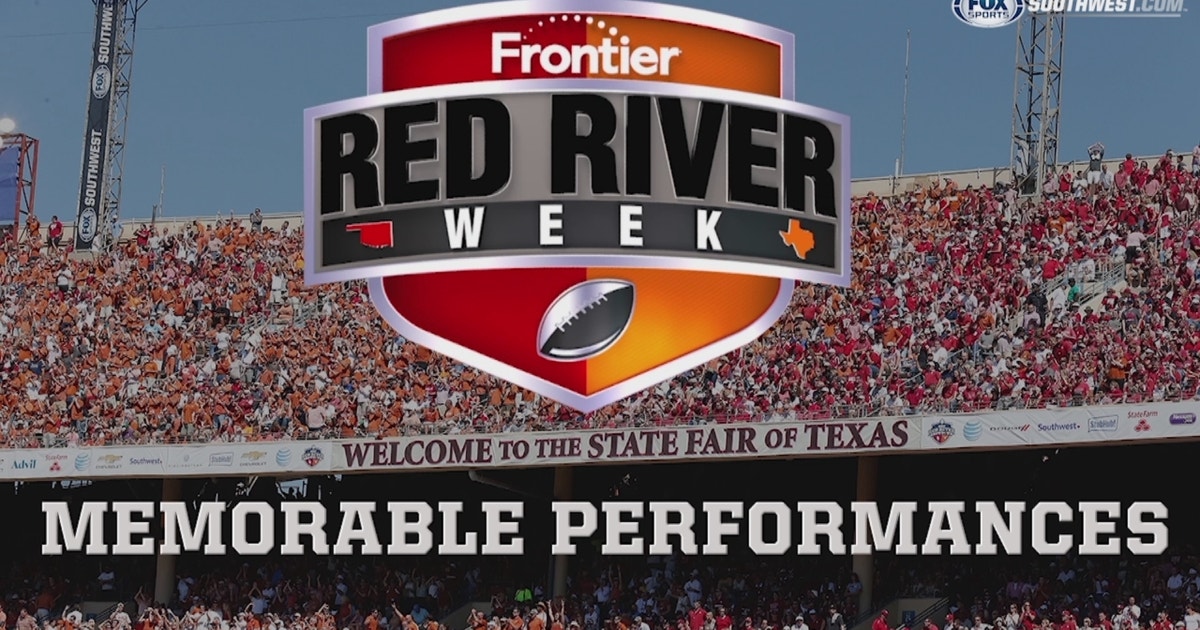 In the 100th meeting, Texas was ranked No. 2 overall and Oklahoma was unranked for the first time since 1999. Texas blew out Oklahoma 45 to 12, breaking a five-year losing streak to the Sooners. The Longhorns would later go on to win the 2005 National Championship, which many consider the best college football game ever played. ESPN also voted the 2005 Texas Longhorns as the most dominant team in college football history.

This game was close from beginning to end. Oklahoma scored first with a quick touchdown to tight end Jermaine Gresham, but Colt McCoy and the Longhorns responded with 14 unanswered points to take the lead. Sam Bradford and the Sooners were able to tie the game 14-14 before halftime. In the second half, the Longhorns quickly got into the red zone, but Jamaal Charles fumbled at the five-yard line. A few series later, Sooners running back DeMarco Murray took a 65-yard run to the house, giving Oklahoma a 21-14 lead. Texas scored not too long after that, tying it all at 21-21. Bradford gave OU the lead once more on a 35-yard touchdown pass to Malcolm Kelly with about 10 minutes to go. Texas threateened to score twice in the final minutes of the game, but an interception by Sooners defensive back Reggie Smith sealed the game.

Oklahoma was ranked No. 1 in the nation and Texas was ranked fifth. Both teams were 5-0 entering the game. In the first quarter, Bradford completed a five-yard touchdown pass to Manuel Johnson to open up a 7-0 Sooners lead. With 6:41 left in the first quarter, Texas answered with a Hunter Lawrence 26-yard field goal. OU scored two touchdowns in the second quarter and Texas scored a field goal and two touchdown, including a 96-yard kickoff return by Jordan Shipley.

In 2018, Texas came into Dallas ranked #19 facing the undefeated #7 Oklahoma Sooners, the first time both teams were ranked since 2012. Heisman winner Kyler Murray got Oklahoma out to a fast start scoring on a six-play, 65-yard drive that took only 2:40 off the clock. On the ensuing possession, Texas, led by then sophomore quarterback Sam Ehlinger, answered back with a five-play 75-yard drive.Texas appeared destined to regain the Golden Hat after taking a commanding 45-24 lead with just under a minute left in the third quarter, but Murray had other plans. Murray led the Sooners for three unanswered touchdowns, including a 67-yard run that took only 11 seconds and tied the game at 45-45 with just 2:38 left to play. But, Texas' freshman kicker, Cameron Dicker, grabbed the national spotlight with a 40-yard game-winning field goal with 14 seconds left to play.

Sam Ehlinger and Jalen Hurts both spearhead offenses that rank in the top 15 in scoring. Texas is scoring 41.8 points per game and Oklahoma is second in the nation with 55.5 points per game.

Regardless of how the 2019 game turns out, the rivalry will remain one of the premiere games annually in college football long after the final whistle is blown and the clock reads 0:00. Then, a new clock starts: the countdown to next season's Red River Shootout, Red River Rivalry, or Red River Showdown – whatever you choose to call it.

Can you beat the KVUE Sports team in a Texas Longhorns pick 'em? Submit your predictions here.